‘Twas back in September that Charles Baker brought Derek Mossman Knapp to Butcher Bar for a sit down with Chile’s newest and oldest wines. You all know Charles from Riesling and Stratus Vineyards fame. Derek is a Canadian in Chile and few winemakers, expatriate or deeply local generational have delved as deep into the country’s heartland, oldest vines and ancestral traditions.

Each wine is from a different place: Caliboro, Sauzal, Truquilemu and Portezuelo. Separate parcels of one or two hectares each belong to a small farmer who works with horse and plough as his family has done since colonial times. The wines are made by hand with native yeasts in small tanks, punched down manually and pressed out in a small basket press.

I tasted one Pais and three Carignan field blend lots that day with Jamie Drummond and Sara d’Amato. Here are the notes.

“You tell me there’s an angel in your tree,” or in this case on the Pais vine, a.k.a. “Mission” or in the local vernacular, “Pipeño.” In the hands of Canadian Derek Mossman Knapp these high-yielding, nouveau producing Maule Valley ancients are taken on a tour of resurrection. He and winemaking partners Pilar Miranda and Dr. Alvaro Peña are taking these ‘old becomes new again’ varietal vines and making history in a glass. The First Salvo Ferment as they call it is “the wine they drank in colonial times” but here original, purer than natural, with minimal sulphites after the (no new oak) barrel ferment. As a red berry liquid salve it is chalky and full of grape cure, “a one winter wine” as Derek likes to call it. So enjoy this between when this is tasted and when this is written (April 2017), literally. A wine that pushes the lore of measurement, history and precision. The price reflects the one winter promise. familiar somehow and fantastic. So please, don’t burn down the mission but feel free to “take all you need to live inside.” Drink 2016-2017.  Tasted September 2016

From a wine company in which harvests were and are still are measured in barrels. The fruit is fermented in open-top vats, caps are punched down by hand, pressing is manual, yeasts are strictly native and work is done in a renovated (circa) 1840s cellar. The Portezuelo Vineyard in Itata is just the sort of place to give a bottle a wine a story, like this parcel of a hectare (or maybe two) farmed with horse and plough as the farmer’s family has done since colonial times. This carignan field blend curated by Derek Mossman Knapp, Pilar Miranda and Dr. Alvaro Peña delivers a deeper wealth of fruit so should be considered as carrying a longevity into a second winter. It is possessive of some sweet and fine-grained tannin and forges an impossible connective route from one fruit on to another; pomegranate to raspberry and vice versa. Really remarkable into its great length. Exactly what you need from a two winter wine out of which the field variegates in the glass. Also offers up proof that these wines are about places not varietals. Drink 2018-2020.  Tasted September 2016

A sister to the Lot #48 grown in Portezuelo, this Truquilemu field-blend of carignan, garnacha & mataró is grown by a small farmer using ancestral hand and horse methods in the tradition of the Secano Costero. This strikes an accord in similarity to Lot #48 but here of a more pronounced, deeper cure that is not just grape-derived but takes a bigger risk. More granitic, schist syrah-like with charcuterie aridity and the intense tang of dried smoky, meaty flesh running through its veins. More hematic, ferric too, deeper, grittier and firm. This carries tannin and will go three to five winters deep, at least. But you never forget about the fruit here. There are blueberries mixed into the red drupe. A complex conclusion is drawn. Drink 2018-2023.  Tasted September 2016

Lot #45 comes from the Sauzal Vineyard and like sisters 47 and 48 is a carignan field blend co-planted with garnacha and mataró. The location is on the road to Constitucion in Empedrado in the shadow of the Sauzal Coastal Mountain Range. The older cracked granite soils cool slower than those of Andes proximity. If the Lot #48 in Portezuelo showed the region’s red fruit and #47 out of Truquilemu the schisty-mineral and meaty cure than it is here in Lot #45 where the twain is met. The freshness antithetical to taut stylistic combined and distilled into the most amenable is quite something. It makes sense that Derek Mossman Knapp would pour this last of the three, if only for educational purposes, but I prefer to call it revelation. Now we are tasting something you can store between two and five winters. The Sauzal persists as red fruit sumptuous with quite a bit of liquorice within a solid core of acidity. Fresh and yet quite firm, bright and cool. This will gift the broadest appeal because it has less cure and more middle of the road desire but it is still so very different than 99 per cent of Chile. Also noted are some herbs and fennel but it is not distinctly savoury. It is also the most tart of the four, the most recognizable in any commercial sense and yet it is anything but that. Drink 2017-2020.  Tasted September 2016 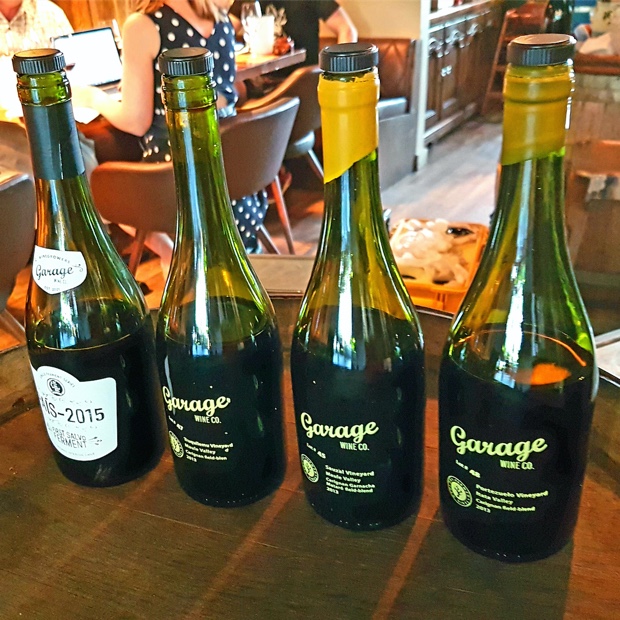