Curious to know what wine to drink with Pond Hockey? On Saturday night of the big tourney we had a pot luck dinner and opened these wines…
KUNDE ZINFANDEL 2007 (965921, $16.95). Like waiting for a loved one, gazing hopefully at the overhead screen, patiently anticipating this VINTAGES arrival. Barque BBQ price and personality. Bang the drum slowly while the fat renders and enter Zin city. Jettison of bramble, berry and brawn yet no cloying trail of exhaust.   mjg 89

X WINERY NAPA CABERNET SAUVIGNON 2007 ($29.95) protrudes as a big nose of capsicum and perfumed poppies with a ton of dark fruit. Grainy tannins will require some aeration. Sure value in mid-round Napa draft choices. I’ll buy tickets to the first few seasons and drink up before free agency sets in.  Available through www.25brix.com.  mjg 90

For seven years I have been playing in the Taylor Cup Pond Hockey Tournament to raise money for Cancer research at Princess Margaret Hospital.  We skate on the frozen ice of Sparrow Lake at Bayview Wildwood Resort.  The weekend was everything we hoped it would be and more. Every game was played on ice and no injuries to report. Shout out to our heroes year after year, hosts Lisa, Brian, Brenda and all the volunteers. 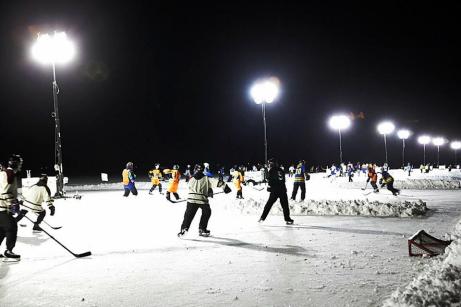 Over $120,000 was raised to support cancer at PMHF. This brings our seven year total to $807,000. My team, VanHooterman raised the second most amount of funds, $13,775. Kudos to my teammates as our seven-year total has now exceeded more than $80,000.
We skated to a 2-2 record, not bad for a bunch of old guys and we kept our string alive. No Sunday games, except for the parents and kids shinny, another Taylor Cup tradition.

Here is a link to the Taylor Cup page:
http://www.taylorcup.ca
Good to go!