The village of Dernau, Ahr Valley

The Ahr Valley is one of Germany’s furthest northern wine regions (out of 13), more so than the Mosel. The total area is 150 hectares (of 100,000 total in Germany). Meyer Näkel is a young winery by Ahr standards, now at the fifth generation, with sisters Meike and Dörte Näkel at the helm. Before that there was a winery (Meyer) and a restaurant (Näkel). When the grandparents (Paula Meyer and Willibald Näkel) married the entities merged. In 1982 Meike’s father and mother (Werner and Claudia) took the winery and her uncle the restaurant. Started with 1.5, now there are 15 hectares under vines. Meike interned at the Dr. Heger winery in Baden and later with Weingut Fürst in Franken.

The slopes are ridiculously steep. So difficult to work. Dangerously steep inclines, contours, weathered (in some cases blue) slate and greywacke define the grape-growing. “In our case it is both the shape and stone of the valley,” tells Meike. The Ahr runs west to east as a deep valley, creating canyon like topography. Just the southern part is planted to vines. Dark slate warms and conserves heat, returning it to the air very slowly. It’s a glass house in essence. The focus of the tasting was the varied ways in which Meyer Näkel makes use of spätburgunder, in sparkling, rosé and pinot noir varietal wine. I visited with Meike Näkel after attending the Prowein wine fair in March 2017. These were the nine wines she poured and my notes.

A 100 per cent pinot noir, one of two Rosés allowed under German law, no longer called weissaste, in which you need to use 100 per cent of that variety to say it on the label. Despite the old-school reputation (like the old aunt drinking sweet sherry) so the word Rosé gives credibility towards dictating quality. Intensely floral and full of strawberry essence there is also something very stony and certainly some sweetness. Summer refreshing with such capable acidity. Flavours promise citrus and candied flowers. It’s also just a bit crunchy. Success is not predicated on a stark and dry expression. The acidity sees to the balance and the energy. Just bottled too weeks ago. De-stemmed, crushed and two hours skin contact. Only stainless steel. RS 7.9 g/L ABV 12.5 TA 7.0. Drink 2017-2019.  Tasted March 2017

Spätburgunder Blanc de Noir “Illusion” is obviously not Rosé like, but just a hint though not even Vin Gris. Half is made saignée, then 10-15 per cent is removed. The second half is crushed bunches of pinot noir. If just saignée the lack of tannins would lead to a tannin-less, potentially dull wine. Ten per cent in new barriques. Bottled two weeks ago. It just smells viscous, beyond berries and into peaches. You can imagine toasty and creamy notes on the palate, even if those notes are not yet present. Just an illusion, “looking over your shoulder.” Just hints at effervescence but it’s more like an analgesic tingle on the tongue. The citrus is like pure lime with acidity inward and intense. Very long and should really develop with two years of concentrating, fleshing time. The lack of bitters when you consider how much pure lime and tight acidity is a factor of the dual process, two connecting systems, blending acumen. An illusion because it had to be sold as table wine for eight years, but today it’s fine to call it and sell it as Blanc de Noir. A perfectly cleaner version of a Jean-Pierre Frick. 7 g/L RS and TA. 13 ABV. Drink 2018-2022.  Tasted March 2017

The entry-level pinot noir was bottled in the summer of 2016, after a hot season and dry elsewhere but in the Ahr it rained and it was cool overall. Picking was actually late and the aromatics show off the long, cool, floral temper. De-stemming and fermentation is immediately initialized but the maximum fermentation is 10 and usually six days. The pips are just a quick doo-wop to keep both green and bitter away. A focus on fruit, an absence of tannin and a pure varietal expression. Red trumps green, large wooden casks (15-20 years) also impart no tannin so the finality is simply cherry. That said, this carries some almond pit and green strawberry on the palate. It’s really what basic German spätburgunder is and expected to be. Nicely balanced and in at 13 per cent alcohol. Drink 2017-2019.  Tasted March 2017

Spätburgunder Blauschiefer is from blue slate, from the steepest slopes with highest percentage of slate in the earth, to get it in the glass. A collection of all the blue slate sites in the two villages, this and the sister neighbour. “The stale gives us the specific micro-climate to grow grapes up here,” tells Meike Mayer, at 50 degrees of latitude, but also in the Rheingau and parts of the Mosel and the Nahe. “In our case it is both the shape and stone of the valley.” The Ahr runs west to east as a deep valley, creating canyon like topography. Just the southern part is planted to vines. Dark slate warms and conserves heat, returning it to the air very slowly. It’s a glass house in essence. Glass Houses. Billy Joel. Needs to be on the label. As a thank you and to tell the people. A niche wine locale and yes, there is this metal feel on the nose and even more so on the palate. It’s an intense impression, deep and mined. Vinified by a de-stem, followed by three days of cold soak, then heat and 18 days skin contact. Just new barriques, two to four years old. The tannins are long and indeed elegant with the stones imparting a constant warming blanket across the palate. This goes cool and warm then back again. Idiosyncratic and highly drinkable pinot noir. Drink 2018-2022.  Tasted March 2017

The weathered slate and greywacke of Ahr strata

The good problem to have is that as you grow and buy up land the accumulated hectarage become disparate, spread apart and generally all over the Ahr. Small pieces of land owned by older growers who stopped farming. The holdings are not contiguous. These small parcels need to be gathered and made in cuvées or blends. The plots are just too small for single-vineyards but the “S” is made from those tiny disparate plots. Also from some fruit “stolen” or bled from the three single-vinyard GG blocks, especially from fruit taken from younger vines. Small barriques and 40 per cent new oak after 21 days skin-contact maceration. You can’t write Selection on the label so you use the letter “S”. The nose shows tonic and cherry and a beautiful inhalant/liqueur. The fruit is made darker and more unctuous by the barrel but that fruit was clearly classified to begin with. The first pinot noir with true tang is here in this “S” so this and the wise Ahr bitters design the structure with long lasting intent. Drink 2018-2024.  Tasted March 2017

The VDO follows the Bourgogne cru system, looking for the climats of highest quality. Ostensibly Granc Cru, known as GG (Grosses Gewächs). Sonnenberg is a single vineyard from the “sunny mountain,” in the lower part of the Ahr Valley. From steep slopes though not the most, the underbelly is rock, with loess-loam aboard. That top layer of earth brings the fruit to mix with the minerality. Ice age, glacial pinot noir, fertile and for the first time, a Burgundian presence, if only because of the sweet extract concentration. Five to seven days of cold maceration, followed by a slow warming for seven days and 23 days maceration. Barriques, 75 per cent new oak. It carries that barrel with remarkable ease, like the vintage, ripe, easy phenolic development ensured and by picking. Drink this at your whimsy. Drink 2017-2021.  Tasted March 2017 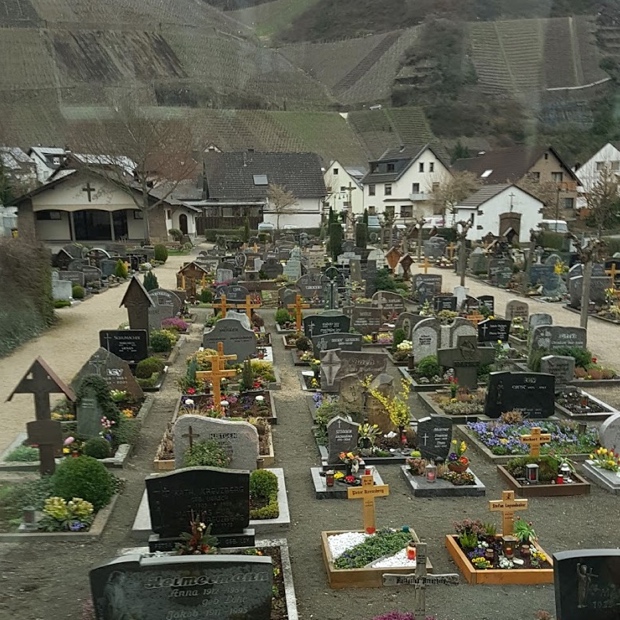 From the high part of the valley, on Grauwacke slate, a highly decomposed slate (in the area known as Fabrigatte) easier to crush so the soil is filled with fine pieces of this stone. There is so much break down that the soil becomes loose, like sand. A crunchy, crispy and fragmented pinot noir, in acidity at least. Means “church vineyard,” of the local dialect in origin. Once belonged to the Catholic church. More mineral, less fruit, a touch more oak then the Sonnenberg, spice but less so with thanks to the quicksand soil work in the development of this wine. Once again the sweetness created by extract from a top quality vineyard is impressive. Drink 2019-2024.  Tasted March 2017

Kraüterberg meaning “herbal mountain,” going back to the Romans who created the terraces and began the wine making processes. The thought is that the reference is in to gardens where herbs were planted along with vines. In the upper Ahr, very steep old terraces, this seems a combination of the first two but more body, with thanks to an increase of clay to go along with the stones. Complexity is a step above, as is fleshy, ripe and elegant character. There is a medicinal quality which is the herbs speaking and a texture as silky as the Ahr is long. It’s a beautiful wine, from 80 per cent new oak but I really do think that the terroir will speak louder with a bit less oak. Drink 2019-2025.  Tasted March 2017

A “Selection Reserve” made from one selected barrique, not made in every vintage. Looking for plants which suffer blossom loss, plants that only produce small bunches of the smallest berries. Mostly skin, small pips and very little juice. Not possible every year and the concentration is really noted on the nose. Again it can’t be called Selection Reserve so “SR” is the moniker. The first vintage was 2009, then 2012 and now here in ’13. Sees 24 months in a new barrel, a total of three years aging and now just released. Very creamy, pretty ambitious and likely costs double to make what it sells for. This shows oak way more (and in the tannin it delivers) because there just isn’t the juice to support it. It’s certainly ripe though the wood makes it seem so sweet. Drink 2018-2022.  Tasted March 2017

The village of Dernau, Ahr Valley