Réva’s is a remarkable Monforte d’Alba property nestled within an ideally situated Langhe amphitheatre, “at the limit of Barolo,” abutting the ridge that separates the potentate appellation’s southern border from Dogliani. Vines of dolcetto, barbera and nebbiolo rest, roost and rule the south-facing hill and a nine-hole links style golf course lays out east to west through the valley. Wooded havens hide deer and wild boar, birds of many ilk fill the naked skies, playgrounds long for children’s playful squeals while Restaurant FRE and its first Michelin Star in 2020 await the return of guests. A Piedmontese farm holiday stay such as this is quietude incarnate, unique, secluded and serene. Wines were made here at one time but growth and ambition make requiem for expansion. A new facility takes shape. Moving north again, at the foot of and below the village of La Morra we come to the cellar in Gallinotto where the wines are now in production. From agriturismo to cantina, Réva the hand as if by magic.

Nebbiolo and Dolcetto at Réva

Réva is a fascinating study of collaboration between five erudite men: Miroslav, Gianluca, Gabriele, Francesco and Daniele. Miro Lekes, owner, native of the Czech Republic and who’s first commercial vintage was 2012. Gianluca Colombo, oenologist, joined in 2010 after working 10 years for the Cordero consultancy in and out of 10-20 estates. Daniele Gaia worked at Elvio Cogno for seven years, leaving in 2016 to join the Réva experience. “If you want to be a protagonist in this world you need to find some space,” insists Gaia and so when he met with Miro and saw the vision for a 10+ year plan he knew his space had been found. Gabriele Adriano is winemaker, Tecnico Presso, formerly with Vajra in Vergne, just up the hill from Barolo. Gabriele joined just ahead of the 2017 harvest. “He’s very precise,” notes Daniele, “Gianluca is the creative one.” Francesco Spadaro joined in September 2018, coming from Viberti and at Réva deals with private customers and orders. “He is the commercial guy.” 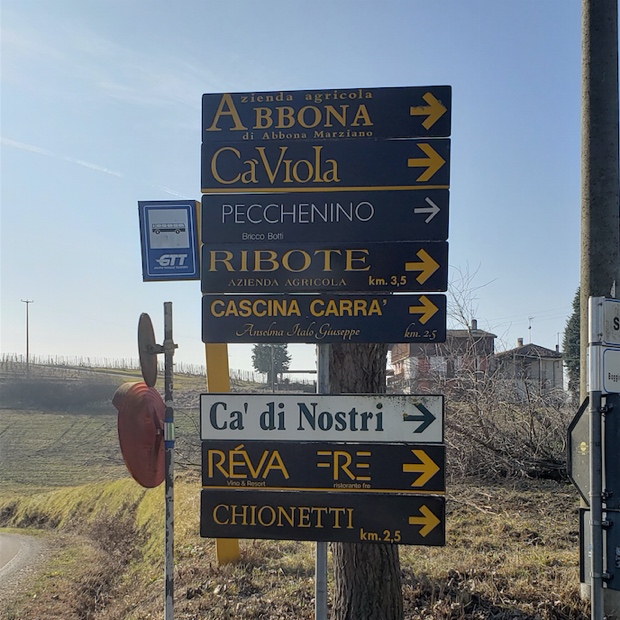 We’re on the road to Réva

Farming practices are organic and not just for the vineyards, but also including the golf course and the wine relais grounds. “You don’t drink the certification,” quips Daniele, “you drink the wine.” Growth is quick and to the point because “there are five men working on the same wine. That’s the secret.” Total production at Réva is 65,000 bottles, the current maximum goal. Up to and at times above 10,000 each of dolcetto, nebbiolo, barbera, whites and the classico Barolo are the workhorses for 85-90 per cent of production. The cru Baroli from Ravera, Cannubi and Lazzarito make up the remainder.

“For sure Réva is a unique place in the Barolo area” tells Daniele. I spent a glorious January day with hime at the two properties near Monforte d’Alba. You need to begin tasting the ’16s, ’17s and ’18s because the ’19s in barrel will blow the roof off of the Langhe. Our third stop was for lunch in Alba at ventuno.1 under the culinary auspices of Chefs Alfonso Russo and Francesco Ferrara.

Know this. Réva’s are modern, 21st century wines with tremendous new Piemonte drinker’s appeal. They are also seductive to informed and discerning sommeliers because of an innate connection to the past. The notions that arise and astonish us are not because they are new, but because they are the sort that have been so long neglected and overlooked. The nebbiolo in particular are rooted in time tested pragmatism, decades, if not centuries old. They will stand the test, of longevity and time. These are the six wines we tasted.

Taken from San Sebastiano area, vines 15-20 years old in Monforte d’Alba. “We have a special view of the nebbiolo,” tells Daniele Gaia. “In our point of view it has to show the character of the grape, flowers, drinkability and approachable, not a baby Barolo.” And so Réva attacks with a gentle touch, a short and cold maceration to secure nebbiolo kept in a “light” vein, with evident acidity. Carries the youthful “splendore” of beautiful red fruit. A precociousness unhindered, on hinges, in ultra comfortable balance. Drink 2020-2024.  Tasted January 2020

Another highly seasoned nebbiolo of rather dark red fruit and barrel piques that create spikes and valleys in the wine. Hangs on with enough energy to see the acidity match the fruit stride for stride. There’s a sense of structure to see this ’16 last for a decade strong and long. Drinking window will open shortly so the temptation will be to imbibe often and early, thereby fertilizing the narcotic poppy of drinking pleasure. Drink 2022-2030.  Tasted January 2020

So bright, so thoughtful and so generous. Ravera is the sneaky structured Réva Barolo, of a winemaker’s work that totes the freight of genius. Ravera is wanting nothing from you but gives you everything. A melting pot of Piedmontese nebbiolo, at ease and persistently resurgent. Drink 2021-2033.  Tasted January 2020 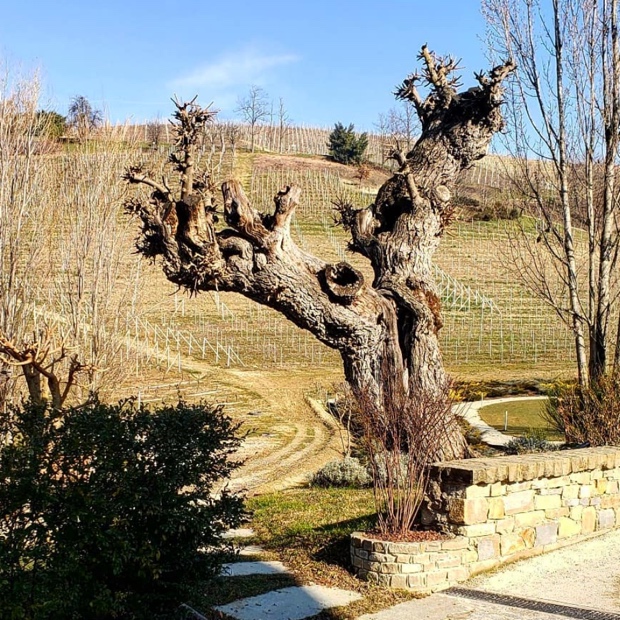 Réva’s Cannubi is based or is the extension of an idea, initialized in 2012, to have three different expressions in Barolo. The search is for elegance of La Morra or Barolo and the structure of Serralunga or Monforte. The third is a combination and that is found in Ravera. The Cannubi plot was owned by Fratelli Barale, a Cannubi di Cannubi right next to the cemetery of Barolo. It’s still a rented property and will be owned at the end of a 10 year contract. Pure Barolo, close your eyes and this is recognizable as the dictionary entry. Hue as in deep depths of pure red with a streak of light. Palate of acidity and fine tannins with length. Rich without being too strong. Not closed, does not attack your mouth and yet there is grip to keep it moving forward. Really fine tannins and fruitful pleasure. Drink 2022-2032.  Tasted January 2020

The single-vineyard cru Lazzarito is added in 2016 and it is Daniele Gaia’s first harvest at Réva. Drive the best car and drive it right away. “This is the best wine Réva has never made,“ says Gaia with great irony mixed into humility. Tasted from low temperatures (22-24 degrees) in tank there was fear of Lazzarito’s tannins. Here above Serralunga a long strip on the top of the eastern side of the hill gives a marl-calcaire meets sandy soil and so the best of both structural worlds; freshness (also from high pH) and grip. Yes it’s silly young and impressionable but already handsome, unadorned and fruit so crunchy, yet also sapid, a pinch salty and the impression of acidity is a freshness with thanks to that elevated pH. A sample but already in bottle and will be released in two years. Drink 2024-2036.  Tasted January 2020