The wines of Dog Point Vineyard

Dog Point Vineyard sits at the confluence of the Brancott and Omaka Valleys in Marlborough, New Zealand. Owned and operated by Ivan and Margaret Sutherland and James and Wendy Healy, the Wairau Valley vintners farm clay-loam soils sustainably and with organic, viticultural practices.

Sutherland and Healy are the men responsible for the success of the first iconic New Zealand brand, Cloudy Bay and together they left to form Dog Point in 2004. The name is in reference to the earliest European settlement of Marlborough, the sheep, their herders and the marauding dogs who prowled the scrub-covered hill overlooking the Wairau Plains. The early settlers called it Dog Point. 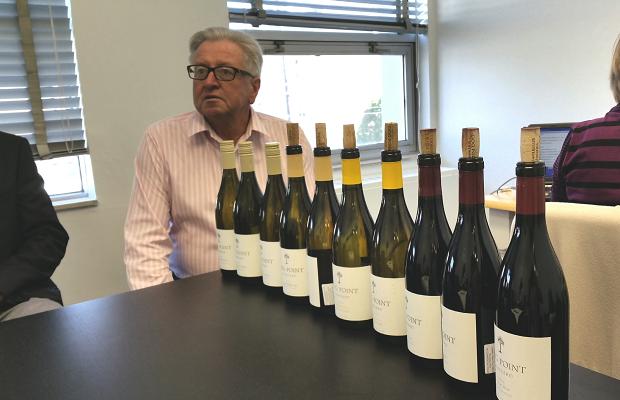 Dog Point produces Sauvignon Blanc which ranks amongst, if not tops the long list of New Zealand’s output, for quality, ubiquity and consistency.  The single-vineyard Section 94 Sauvignon Blanc takes the varietal intensity to another, barrel-influenced level. Chardonnay and Pinot Noir are made in a uniquely Dog Point style, neither emulating nor simulating Burgundy. This is the essence of the winery’s modus vivendi.

James Healy and viticulturist Nigel Sowman brought Dog Point’s wines to Toronto last week, to celebrate their 10th anniversary. I sat down with them at WineAlign, along with Trialto Group’s Richard Dittmar and fellow WineAligners Sara d’Amato and Steve Thurlow. Here are the notes on the 10 wines poured.

What James Healy calls “the generic Marlborough style,” with flint and ever-present though much faded reduction, grapefruit and lime. The vintage (2014) was not cold at all so it lacks the verdure. There is subtle, gentle clementine and palate viscosity. The acidity is all about bringing balance. So fresh, spritely, lime-juicy and always essential.

So orderly and aligned, from ripe picked fruit with fervent acidity and all proportions in perfect working order. Four months settling in bottle has only worked to reinforce positive opinions. Grassless and flinty but no discernible elemental vagary, certainly no sulphur. This Sauvignon Blanc may just be the most consistent in every vintage, not only stylistically but also for the hedging of probability bets for guaranteed Marlborough quality. This is a superb vintage for the pied-à-terre phraseology. Like school in fall, winter and spring, the Dog Point is all class.

From my earlier note of November 2014:

The prototypical Marlborough Sauvignon Blanc hitting all the classic numbers is right here in the Dog Point 2014. Low pH, high acidity, minuscule residual sugar and elevated aromatics. It’s ripe but ripped by citrus juice and zest. Like cubes of honeydew, bitter winter melon and dried lemongrass soaking in and flavouring a dish of briny scallop carpaccio with coarse sea salt and capers. The sapidity is palpable, the excesses vivid. I would avoid too much variegated gastronomy when sipping this wine. Opt for simpler fare because its talents would otherwise be mimicked and suppressed.

Certainly showing some secondary characteristics in evolution and yet the composition is as close as a first cousin to the current 2014, with more than just thanks in part to identical yeasts. This has lees, “a feature of the 2011 wines,” notes James Healy. Time has magnified the flint but it has also stretched and elasticized it. The struck aromatic glint has passed and will continue to bob in slow motion. Dog Point in presentation of how and why Sauvignon Blanc can be enjoyed with age, over time.”Ain’t no reason to go up, ain’t no reason to go down. Ain’t no reason to go anywhere.” The late palate is lime, as per usual, but also lemon, in ’11, with a paraffin coating. “Time passes slowly and fades away.” Three to four more years for this SB. Drink 2015-2019.  Tasted May 2015

It must be said straight out that a wine such as this wins hearts and points for its longevity, if nothing else. The kudos is warranted tenfold especially because it’s a Sauvignon Blanc and one that has emerged unscathed and even star bright. From a warmer year and extended growing season. Bigger bunches resulted, like in 2014 and this has evolved with considerable spice, as if, but not by wood, yet less developed than the petrol and lanolin slinging ’11. This is a wine that unequivocally proves that Sauvignon Blanc can age, gracefully and properly. Has an almost indiscernible flinty reduction, which means it never really had it in any concerning level in the first place. A vintage-specific white, with Chenin-like feigned sweetness and lactic feel. Marvellous to note that the final taste can be nothing but Sauvignon Blanc so in the end, the flavour profile wins out. Drink 2015-2017.  Tasted May 2015

The Section 94 is, in the estimation of James Healy, “a particularly good Sauvignon Blanc block.” Planted in the 1990’s, the now wise old plot is churning out exceptional fruit with cold, cold acidity. Says Healy, with respect to the vintage,” we didn’t want to muck around with malolactic,” so the fruit notches naturally in barrel, with indigenous yeasts. “They won’t stop prickling for over a year,” adds Healy. Bottled at about 18 months, this is a wine given the full solids treatment and is more than obviously a major step up in Sauvignon Blanc complexity. Offers a feel like pebbles bobbing and popping around in the clot of the wine. Wood spice and so much grapefruit are the grumous layers, along with lactic, citric acidity. Time has thus far been very kind, the matchstick reduction now really subsiding in this subsidized white. Drink 2015-2019.  Tasted May 2015

It is interesting to note that 2012, from a cold vintage, has evolved with a lactic palate and yet this ’08 seems so very fresh. Petrol and developed, thickened honey in wax are the bees knees in here. While a touch lactic in its own right, the tapestry weaves into second, third and fourth layers. A Sauvignon Blanc that really offers the best of all worlds. The leesy, lactic-secondary and flint-tertiary feel is round and in surround. This is the most Bordeaux white of all in the DP-SB continuum, with presence, savoury herbiage and pointed, sumptuous flavours. Grapefruit and bitter, beautiful tonic orbiculates the finish. The unanimous conclusion is of a wine that is very much like Champagne, without the bubbles. Drink 2015-2020.  Tasted May 2015 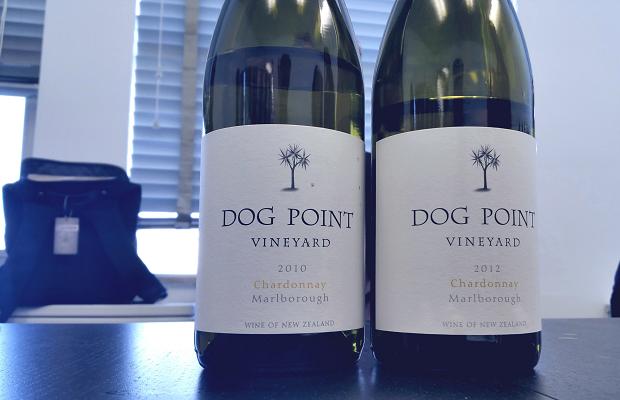 The barrel, in and out of reduction, defines the yet early life stage of the ’12 Chardonnay. The count is 15 per cent new with heavy toast “because we just like that heavy toast flavour, just not too much of it,” notes James Healy. Fully malolactic, but a very late one, this slow-cooked Chardonnay, with matching matchstick acidity. In expression it is of a very cool-climate style with tons of lime and emulsified to a gemstone melt, green goddess consistency. A wine that could be a cousin to, share spirit with Paul Pender’s Vinemount Ridge Quarry Road, of “emerald shine, the gemstone tannic scrape.” The Dog Point etymology is two-thirds Mendoza clone and one-third Dijon 95, the former needing sugar to get ripe, but it provides the citrus and the acidity for the palate. Drink 2017-2020.  Tasted May 2015

Remarkably similar to the later 2012, tasted side by side, here with toast, nuts and grapefruit. It may be just a touch warmer, with more fruit yet still cool by nature. The ’10 is not as green, not as salient in polished stone feel, with less weight and girth. The sugars and bitters are increasingly integrated and push more direct, unbiased pleasure. Just a strike of flint ties it to the sibling Sauvignon Blanc. “Statues made of matchsticks, crumble into one another.” Marlborough Chardonnay is better than you think, love minus zero, no limit. It’s true if it’s been said. “She doesn’t have to say she’s faithful, yet she’s true like ice, like fire.” The Dog Point ’10 persists, bobs, rhymes, talk in and out of line. It finishes strong, in grapefruit, without sophistry or equivocation. Drink 2015-2018.  Tasted May 2015

From vines now coming of age (12-13 years old) and an increase in stem inclusion (20 per cent). Ripeness consistency was achieved with the aid of shoot cutting/thinning. All this to arrive at the Dog Point Pinot’s place in its necessary evolution. A wine of black cherry and roses, dark, dusty, ripe, in depth of earth, concentric circles of fruit and acidity. Great length.

Perfectly bright Pinot Noir while simultaneously deep, dark and recondite. Energetic in spirit, ripe and packed with barbed, piquant fruit sewed in threaded badges of spice. Perfumed as if by cinnamon and displacing rose petals. Like the scent of a crystal clear summer’s night, all warm, dry and of dried strawberry juice cracked paint. Grounded and fulfilling, of its own holes, in the mouth and finishes with a feminine touch. A thoroughbred, a filly, that trots on an on, long after it has crossed the finish line. Drink 2016-2021. 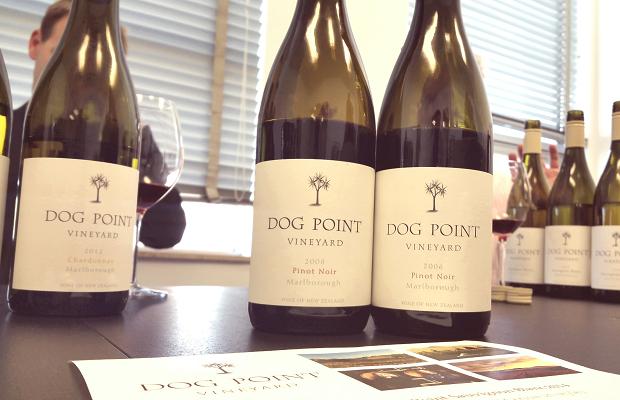 Just a small amount of stem inclusion, a practice that will increase in subsequent vintages, helps to define structure and to a lesser extent, aromatics and taste. Yet the effect is has on tempering and mitigating sweetness is overt and protrusive. “That whole ripe stem thing…it’s a dog’s breakfast, ” says James Healy. Both he and vineyard manager Nigel Sowman have accepted and embraced the necessity of stem inclusion but as Sowman notes, “is there such a thing as a ripe stem, because you’re after sap, not astringency.” The stems here have balanced out the really ripe, jammy fruit. This ’08 is all about florals, of many flowers that offer invitation to then investigate the Pinot Noir morphology. This has turned to liqueur yet still cracks, pops and finishes with bitter, tangy and swelling cranberry. Drink 2015-2018.  Tasted May 2015

In 2006 stems were not yet part of the practicum and though the wine remains very much alive it has lost a modicum of structure and a minor key of balance. The highest degree (though certainly not over the top) of paint, varnish and veneer emanates from the edges of the jammy fruit. This youngest and lower on the amicable scale for a Dog Point Pinot Noir is both sweet and sour. The depth (mostly due to very young vines) pales in comparison with even ’08 and the flavours are disparate but what is there is fun and so very Pinot Noir. Can be nothing but and is really the most Burgundian of the three (’06, ’08 and ’12) tasted. That said, it’s not necessarily a good thing because Dog Point does and should try to avoid emulation. The final assessment and most poignant note concerns how barely evolved this nine year-old Pinot sits. Tasted blind you would be hard pressed to guess closely at its age. “If we had an ’06 vintage today we would make better wines,” admits James Healy. A touch of cola and a grapefruit note hit the finish. A Dog Point thing. Drink 2015-2020.  Tasted May 2015