Pond Hockey. Is there a comparable Canadian cold weather activity yet apposite to define our sense of place or recreational state of being? Summer assigns us to a canoe but winter demands a bipedal, upright physicality built of speed and agility. In 2012 my yardarm to yardarm hockey and libation report journeyed beyond beer, to wine of course. It’s a natural tangent for me because of a keen awareness for all things terroir. Our roots grow out of the woods and lakes, from water sliced by the tip of a paddle and ice cut by the blade of a skate. Wine rides shotgun, like a loyal and faithful companion, wherever the trip may take me.

In 2006 some neighborhood friends gathered together in Lakefield, Ontario for a pond hockey tournament in honour of Judy Taylor, our hosts’ great friend who had recently lost her battle with Sarcoma. The Taylor Cup is in tribute and in memory of Judy, with funds raised benefiting the Princess Margaret Sarcoma Research Fund, to ultimately help others who are fighting this deadly disease.

In 2007 the tournament was moved to Bayview Wildwood Resort on Sparrow lake in Port Stanton, northwest of Orillia. I have now participated in my eighth consecutive Taylor Cup Pond Hockey Tournament to raise money for Cancer research at Princess Margaret Hospital.

We skated to a 3-1 record in the 35-team draw, matching our previous best. Once again we did not have to play on Sunday, save for the parents and kids shinny, a must do Taylor Cup tradition. The 2013 Taylor Cup champions were the three-peat boys from Around the Horn, defeating the Hamilton Houdinis for the second straight year.

Two wines from Ontario’s Prince Edward County made the trip and hung out rink side while we played. We were very careful not to shatter their glassine envelopes. As for the other teams, well mostly they just drank beer. 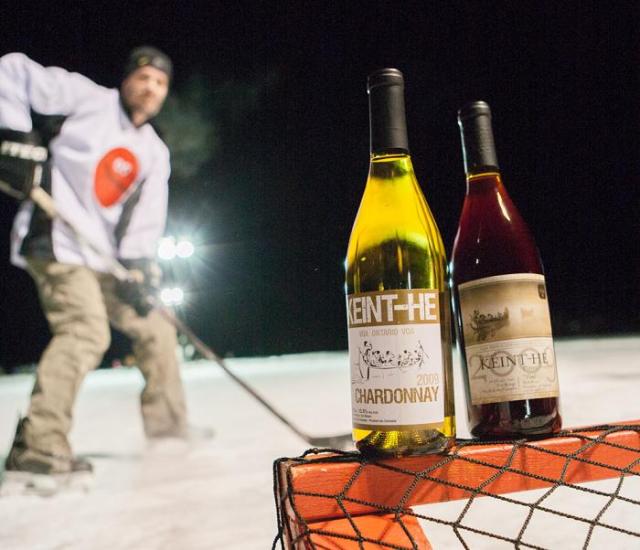 One comment on “We played pond hockey, we drank wine”