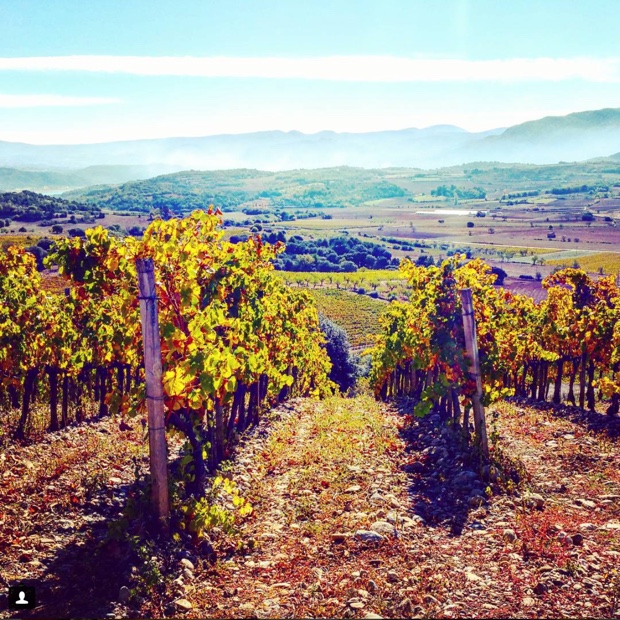 This is the third of five instalments concerning the wines of Garnacha from the regions of Aragón and Catalonia.

Related – For a comprehensive report by Sara d’Amato and I read WineAlign: Discover the Flavours: Wines of Garnacha

In October of 2015 WineAlign colleague Sara d’Amato and I travelled together with Christopher Waters of Vines Magazine.  The trip’s mission was to discover Spain’s Wines of Garnacha in their natural habitat, the five distinct and allied Denominación de Origen in the regions of Aragón and Catalonia.

Our host in Zaragoza was The Spanish Institute for Foreign Trade (Instituto Español de Comercio Exterior, ICEX), the Wines of Garnacha campaign and the office of Garnacha Origen. The trip was orchestrated with expertise by Aragón Exterior Managing Director Ignacio (Nacho) Martinez de Albornoz and Head of Wines from Spain (ICEX) Alfonso Janeiro. Our chaperones were Ignacio, Sofía González Martínez, Ivo André Alho Cabral and Roser Mestre, in Zaragoza and on expeditions to the five DO’s that comprise the wines of Garnacha.

The centuries have seen to winemaking in Somontano though it was not until April 30th, 1984 that the protected designation of origin was granted by the Spanish Ministry of Agriculture. What has transpired, transformed and transmogrified in 31 short years is astonishing.

The proof lies in a day of Somontano pudding. First a 130 km drive north out of Zaragoza, to the place they call “at the foot of the mountains” and a visit to the D.O office in the regional capital of Barbastro. A perfectly pressed early morning café and an overture of origen by local el presidente Mariano Beroz Bandrés sets the denominational stage. Second, a hike along with viticulturalist José Antonio through the highest bush vines vineyard belonging to Secastilla of Viñas del Vero. 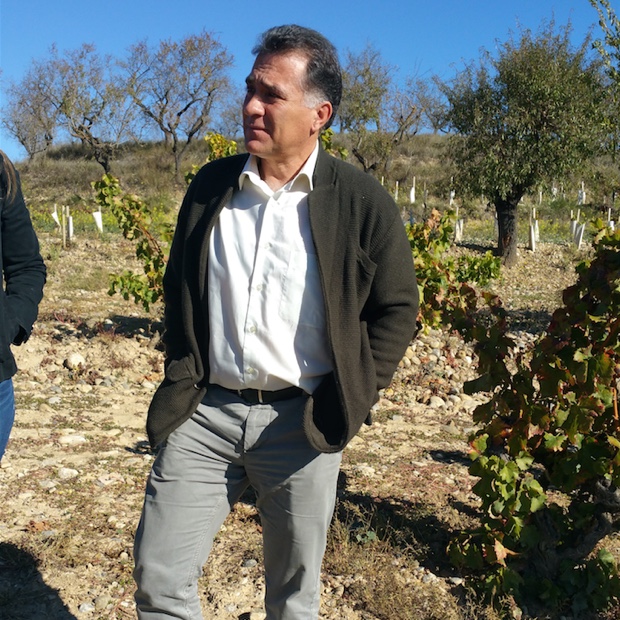 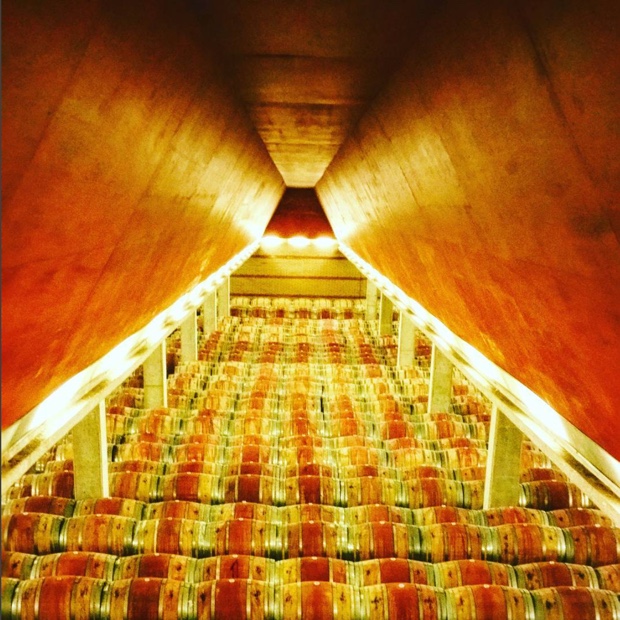 The Barrel Cellar at @VinosEnate. Muchas gracias for the tour and the hospitality. Para todo @DOsomontano

The DO Somontano region is located at a height of between 350 and 1,000 metres above sea level and from Secastilla’s vineyard the six castles visible on peaks and throughout the Secastilla valley spread across the blue demure of a brilliant mid-autumn day. The view from Enate is nothing special, that is unless you are the kind of person that is moved by the awesome splendour of foothills and peaks fronting the drama of the Pyrenees.

After lunch a tour through Enate’s labyrinth of great halls and hallways concludes with a mind’s daydream into a Sean Connery Bond film imagined.

In the hills of Somontano low-fertility, brown limestone soil and its soft, permeable underbelly encourages roots to penetrate the earth, to extract just the right amount of limestone. The surrounding mountains protect the vines from the extreme cold and the rain.

Somontano is planted to 4200 hectares (of a total 205,000, 95,000 of it agricultural). There are 20,000 inhabitants, 43 villages, 424 growers, 31 wineries, 15 varietals, 200 wines and 15,000,000 bottles produced annually. Of that total, 70 per cent sold are domestically. The wide range of grape varieties cultivated are Cabernet Sauvignon, Merlot, Tempranillo, Syrah, Parraleta, Moristel, Pinot Noir, Chardonnay, Gewürztraminer, Macabeo (Alcañón), Sauvignon Blanc, Riesling, Red and White Garnacha. Six of these last varietal wines are involved in the Wines of Garnacha program. Mariano Beroz Bandrés talks about the collective approach for their wines. “Market niche, medium-high price, fresh, fruity, touch of oak, for young and innovative consumers.” 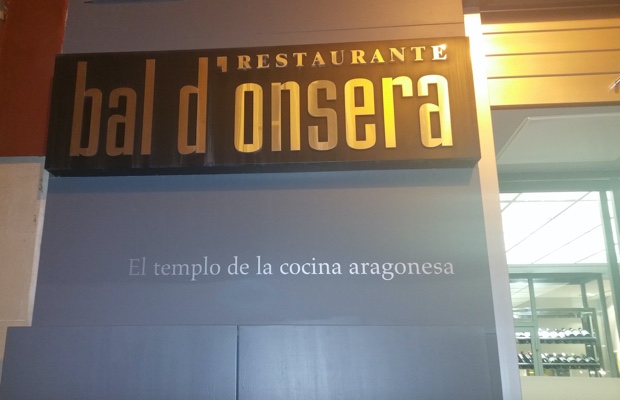 As we did each night previous to five D.O. visits around Aragon, we tasted the following day’s wines while at dinner in Zaragoza. Somontano accompanied Josechu Corella’s Michelen star Bal D’Onsera. Chef Corella’s cuisine is distinctly Aragonese adscititious of quality sea ingredients, to balance out any possible meat overkill on the heels of a Zaragoza week in celebration of the festival of the Pilar. Gastronomy harmonized, magnetized and gathered automatically for the people. Chef’s plates and bowls aligned, as if by invisible connections, to protein, from produce and by molecular touch, in textured attraction, together, without fail. Eleven courses of plentiful exigency chaperoned by the discreet and propitious staff. This amuse bouche was not one of the expected 10.

The Somontano wines were tasted at Restaurante Bal D’Onsera, at Bodega Pirineos and over lunch at Bodega Enate.

The first vintage was 2002, from purchased pre-existing vineyards, going back 60 years. The vineyard source is “Pago La Miranda” in the Secastilla Valley. Four months in Allier Forest French Oak. Subdued specs design this white wine; ph of 3.1, even lower sugar at 1.5 g/l and moderate acidity in at 5.38 g/L. These are the specs of balance, restraint and impossible not to discover-achieve elegance. A re-discovery of the rarity here in Garnacha Blanca, replete with a mineral forest of fruit, rock and wood. That acidity rules and combines with texture for variegation. This has foothills brush, herb and citrus running through. It is as far from lean and miles from fat. It travels a river through the middle of a valley. Mediterranean temperament and a bite into olive, almond and caper. Sea brine and lemon that mines like teardrops that burst when bitten. Just as it hits the tongue it pops and releases a zesty, juicy, fresh citrus flavour. Though the clarity to age is yet unclear, at three years it will likely lean oxidative, though that development will appear as slow as an early autumn wind. Approximate retail price of $16 CAN. Drink 2015-2019.  Tasted October 2015  @VinasdelVero  @WoodmanWS

Based on vines planted in 1998, beyond youthful in many terroirs but just a baby by Somontano-Secastilla standards. Blended with a minor amount of Syrah (12) plus the native varietal addition of Parraleta (3). Similar specs to the whites with just slightly elevated pH and rS. Vineyards are La Miranda, Prudence, La Mata and La Primade. Eight months in oak. The intent is fruit over savour, freshness beyond herbiage. It lies somewhere in the middle – the middle road trodden, the density is less than laden, the liqueur below a spirited threshold. High quality fruit from a giving vintage with acidity to prop up protein, lactic preparations and La Miranda itself. This Garnacha is focused and fortuitous, coming from solid fruit out of vineyards clearly delineated for their purpose and their capability. Clarity of Garnacha Tinto, with Mediterranean influence, manifested in olive brine and balsam, void of volatility, char and roast. No game, but with game in the name of purity. Elegantly cool, silk threaded and good length. Approximate retail price of $16 CAN. Drink 2015-2019.  Tasted October 2015

Presented by Jesús Astrain Losilla, Director Téconico – Enólogo. From 12 year-old vines, located in traditional vineyard areas/sites, mixed with continental largesse in purple Mediterranean flora and snacks, such as almonds, olives, etc. This brings diversity and in combination with dry farming, vineyard selection for Garnacha and vinification, this ’13 goes at it beautiful, modern funky. Has the soil rubber reduction (it’s under screw cap, keep in mind) and the quick vanilla meets lavender impart of French meets American wood. Combines a barrel’s envelope with clay soil’s natural corrective. A lactic, chalky and liquid smoke impart. Chalk and rock, much red citrus. Most north facing vines for Garnacha in all Spain – makes for freshness. Really crushes as tomato just picked as well, with acidity fully intact – so the thought of such a gastronomy pairing would work well. A red wine for the “I only drink white wine” crowd. Reminds me so much of Alsace Pinot Noir, thanks to the little rainfall. This grows on you with complexity, if you give it time. More ease than demand. Does fruit, Garnacha, Somontano as it should and will. A Somontano statement, manifesto, declaration. Structure, structure, structure. Approximate retail price of $14 CAN. Drink 2015-2019.  Tasted October 2015  @BodegaPirineos  @TheVine_RobGroh

Nicolás Brun Aguerri makes the wines at this small bodega, in production of 300,000 kg’s of fruit annually. Pragmatically trying to make wines “for now and up to three to five years.” Here red Garnacha looking for something beyond freshness, working on aromatics, through a staggered harvest and six months in barrel, along with eight per cent Syrah mixed in. This has the deep sense of cure, like charcuterie, of meaty complexity. A solid second vintage and though there is tar, char, salinity, protein and grain, it has readily ranging though integrated acidity. Fresh is not the operative but alive and kicking butt is. Has reached this slight oxidative state and should linger there for two or three years more. A different style, not rebellious by any stretch and a great window in the Garnacha-Somontano potentiality. Drink 2015-2018.  Tasted October 2015  @Batandesalas

Produced since 1998, Mascun is always on point with 100 per cent varietal wines. Vines grow at between 350-550m. Mascun comes from the Latin, “house of witches.” After malolactic is completed the cask work is shared for 12 months between French and American oak. The first bottle indicates another slightly oxidative and pretty if verging on potent Garnacha, with a hint of tea. The supernatural Grenache, the witches Garnacha. A second pour is different, with more verve, acidity and fruit that stands out with much more hustle and animation. Drink 2015-2017.  Tasted October 2015  @BodegasOsca

Based on vines planted as far back as the 1940’s, from the Guardia, Miranda and Botiguero vineyards. The lost valley, a discovered vineyard and not far from 100 year-old vines. Non-irrigated, poor stony soils, low yield, high concentration all work to fight what oxidative tendency that Garnacha might gravitate towards. Vines at 700m interspersed with almond and olive trees. Ten months in barrel, stabilized naturally. New barrels, for structure and age. Those barrels go to La Miranda after the first year. (Whites come from Chardonnay). Possessive of perfectly complimentary volatility. Very alive and fighting. The lush texture is driven like a stake through a beef heart with the acidity and a fine grain of tannin and line. Approximate retail price of $32 CAN. Drink 2015-2019.  Tasted October 2015

An oaked Chardonnay welling in gemstones, butter and salinity. Acidity end energy are set to full throttle. Fruit fills the crooks to brimming. Oak is not shy but rendered in decisive integration. Its reductiveness coupled with some years in bottle make for a showy wine in recognition of its own amour-propre. That ability to flaunt its wares is backed up by a surprisingly most excellent structure from what is not the most well-known Chardonnay region on the planet. Drink 2015-2019.  Tasted October 2015  @VinosEnate

At the end of a Somontano day we drove further north to take in the medieval village of Alquezar. A bucolic, ancient place only needed be described in images.

“Looking up, I noticed I was late.” #alquezar #somontano #pyrenees