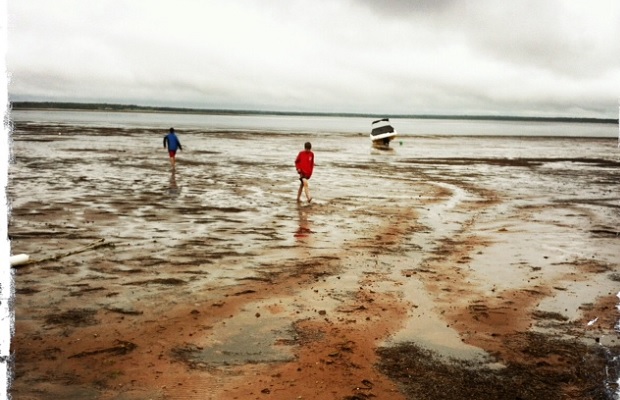 Tides. The Maritimes. The new viticulture.

Headed out for the East Coast, pulled by a great maritime tide, family in tow. To a cape and back. Ontario-New York-Massachusetts-New Hampshire-Maine-New Brunswick-Nova Scotia-New Brunswick-Quebec-Ontario. The voyage imagined as a whole is revealed as an ebb that rides a crest outward bound for the tip of Cape Breton Island. A drive to reaches with no ability to seek accessory in further extensions. The inward sail as a retreat back to the Big Smoke, requiring returns equal and proportionate to the outward gains. Each day the tides carried us to promulgate layovers, to begin flowing again each seriate day, at the hour of its reversal. 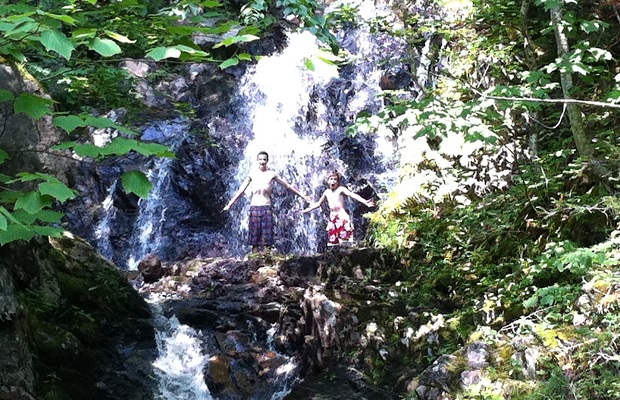 Some tides 101. Tides are the periodic rise and falling of large bodies of water. They are created because like magnets, the Earth and the moon are attracted to each other. The gravitational force of the moon is one ten-millionth that of earth, but when you combine other forces such as the earth’s centrifugal force created by its spin, you get tides.  The sun is important as well, but in minutia as compared to the moon.

Water is what the Earth holds on to and every day (well, actually in a span of 12 hours and 25 minutes), there is a period between two high tides. Spring tides occur during the full moon and the new moon. Neap tides occur during quarter moons. 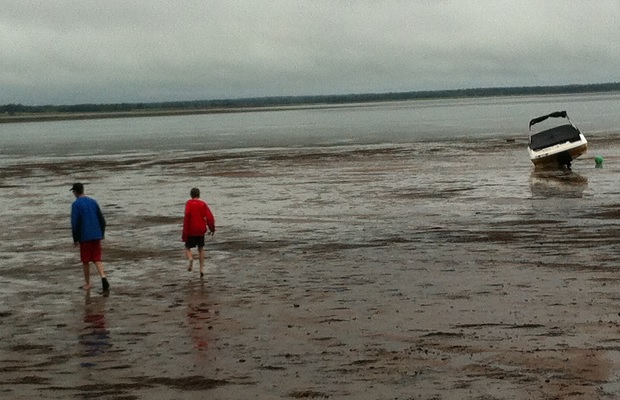 Are you in or are you out? 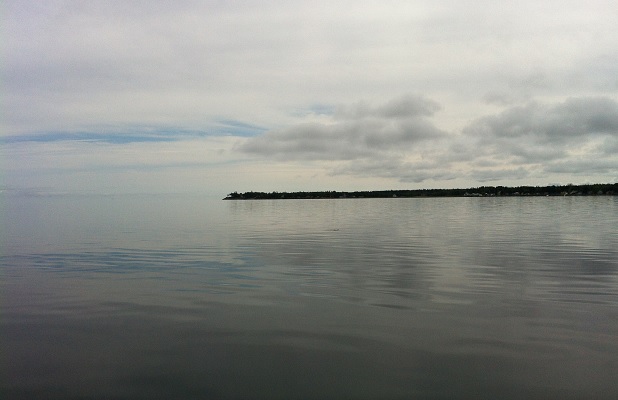 Tide in, on the Northumberland, very free, and easy

Of all the impressive vistas, formidable rock faces and seemingly endless, edge of the world bodies of water to perpend, way out and beyond on the east coast of Canada, none feast more blatant than the Bay of Fundy. Each day 160 billion tonnes of seawater flows in and out of the Bay that intersects Maine, Nova Scotia and New Brunswick. Nowhere else in the world resembles the scabrous shorelines, islands and waters of this wondrous place.

The Bay of Fundy lies in a rift valley known as the Fundy Basin and is home to the world’s biggest tides, highest in the Minas Basin, Nova Scotia. “The uniqueness of the Fundy tides can be attributed to three factors, the shape and size of the bay, the substantial amount of water that flows in and out of the bay, and the gravitational pull of the moon, which pulls the water towards itself, causing a bulge on the ocean surface.” 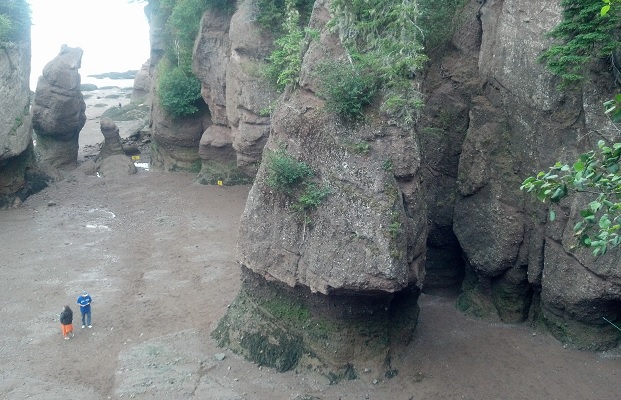 In a quirk of geographical fate, the amount of time it takes an incoming wave to get to the end of the Bay of Fundy and return to the ocean coincides with the time between high and low tides – 12.4 hours. “Like a father pushing his daughter on a swing, the gentle Atlantic tidal pulse pushes the waters of the Bay of Fundy-Gulf of Maine basin at nearly the optimum frequency to cause a large to-and-fro oscillation.” The galance is simply awesome. 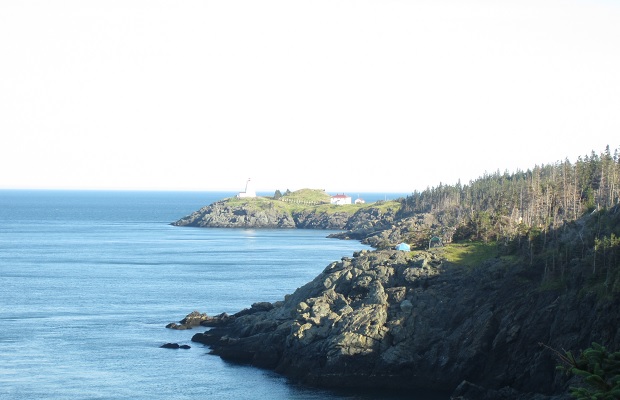 Nicknames abound. Its waters near St. John and west to Grand Manan Island are known as the “aquarium without walls,” and the shores near the 1984 dinosaur bones unearthed at Parsborro harbour are called “nature’s jewel box.” It’s the winemakers of the Gaspereau Valley who conspired to coin the most significant moniker. Fundy is hereby known as “Tidal Bay.” 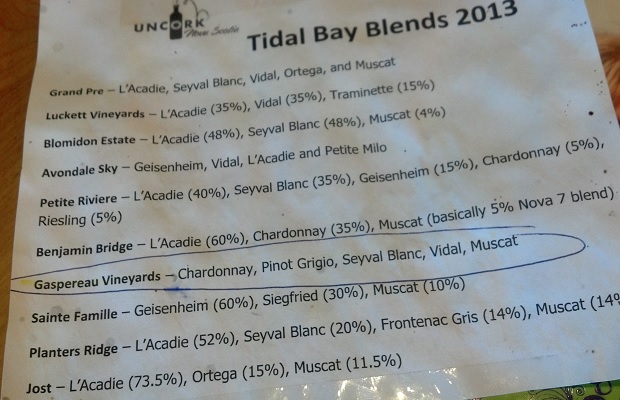 Tidal Bay is the first wine appellation for Nova Scotia and is crafted from carefully selected varieties, produced exclusively by (now) 12 wineries. To be labeled Tidal Bay, maximum brix levels and minimum acidity (9 g/L) must be reached. Pressing takes place by bladder or basket, all in the name of a “regionally recognizable local style.” The 100 per cent Nova Scotian blends “pair well with seafood and ocean views.” Though essential to the maritime wine oeuvre, the Tidal Bay wave remains young and the wines a work in progress. I will connect with the full range in a year or two, perhaps on it 15th birthday, in 2017. Here are three tasted in July. 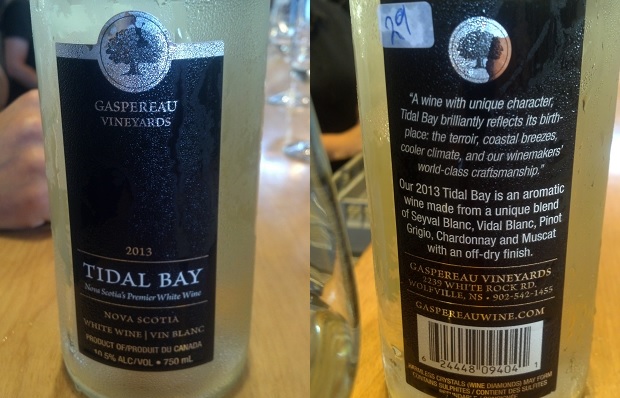 Aromatics are the show in this cool breeze blend. Combines Seyval Blanc, Vidal Blanc, Pinot Grigio, Chardonnay and (13 per cent) mitigating and rounding Muscat. In character of what it sets out to define, this 2013 Tidal Bay concentrates Nova Scotia brightness with tight acids and a clear, stain removing shout into the machine. A warm streak of Fundy salinity soothes the savage cool-climate beast.  @gaspereauwine

Made from Nova Scotia’s most promising L’Acadie Blanc variety in combination with Chardonnay. Winemaker Bruce Ewart coaxed maximum freshness and a consolidation in balance. Chardonnay gives body but does not steal the show. Acids are prominent yet never treacherous. Though not technically an example of  Tidal Bay, the sexy, waxy, saline and bright personality make it distinctly Nova Scotia. Tasted at the Governors Pub, Sydney.  @lacadiewine 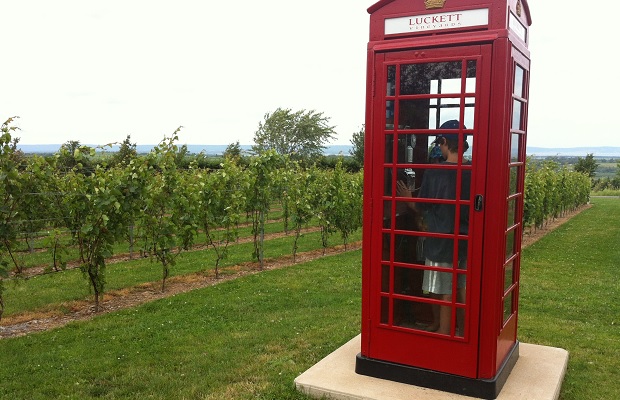 Heterocyclic aromatics go bonkers in this blend of Traminette, L’Acadie and Vidal Blanc. Smells like ready to ripen Sauvignon Blanc, grassy, high in citrus and spiked by capsicum. An ear-to-ear smile of brightness and acidity drives the blend and you might ask it, “you walk cool, but darlin’, can you walk the line?” In the Nova Scotian world of Tidal Bay, Pete Luckett’s take can do just that and so it will not break the ties that bind.  @luckettvineyard

And when we are strangers, wherever we go,
There’s always a side that we still do not know; 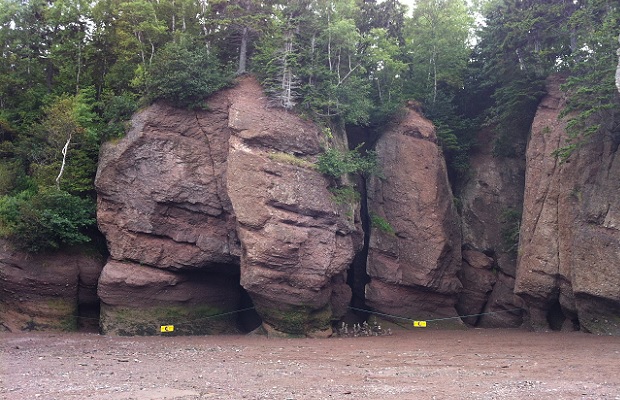 Tidal bores, red mudflats, flowerpot rocks, sea caves, the largest whirlpool in the Western Hemisphere, all impossible irregularities that belong to the Bay of Fundy. So what? The muddy beaches and chocolate rivers might be characterized by the Acadian expression, “Quelle baraque!” or, they might induce chills, “gorziller,” hallucinations even. When a moment is taken, they become unique, quirky barometers to re-calibrate the mire of mundane repetitious behaviour and one’s dizzying and insignificant place in this great big world.

The fascinating geology of the natural rock formations at the Hopewell Rocks, on the Bay of Fundy, is a history worth learning. 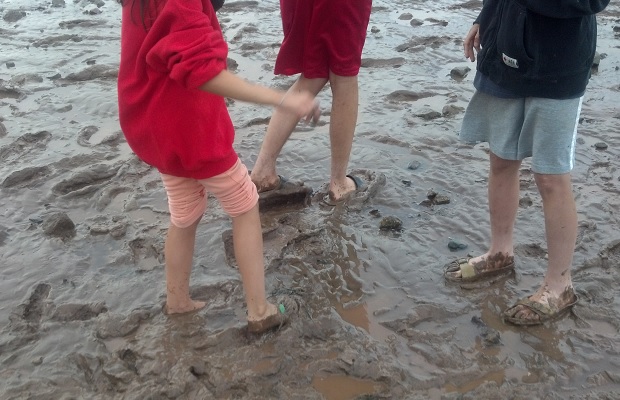 and some days I am a door wide open,
shouting to the wind, singing to the sea. 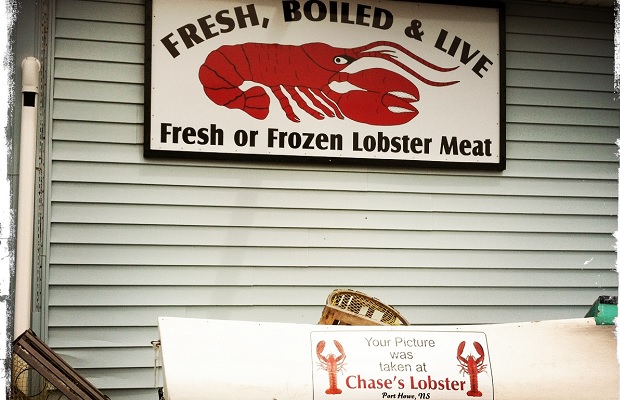 Shake’s head. Emerges from the dream. Begins to put the pieces together. Memories of a long trip. An east coast swing. 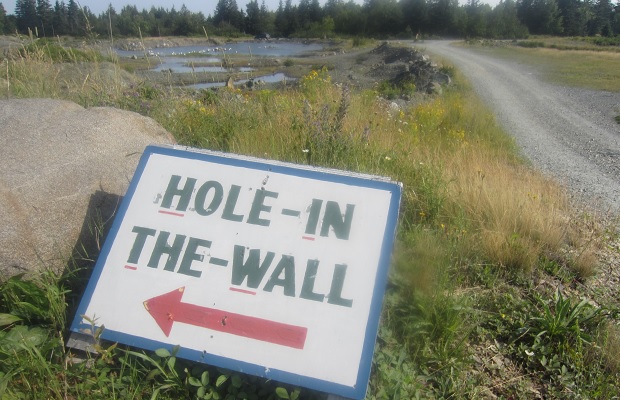 From Black’s Harbour to Grand Manan Island, through St. John’s and up to Big Cove by Baie Verte. A Northumberland Straight traverse past Port Howe, Am Baile Mór, Inverness, a jog up to Cheticamp and Corneybrook. Around the Cabot Trail of Cape Breton Island, a sidetrack to Bay St. Lawrence and Meat Cove, then a decussate and a zig-zag of the fiords to mark an “X” in Sydney. 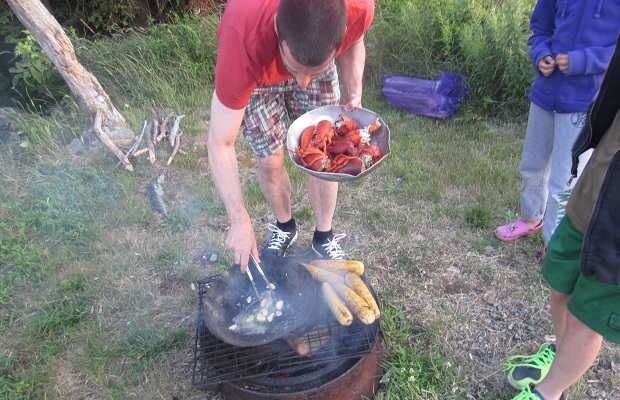 Up the heart of the province, past Truro, down the Annapolis Valley and a u-turn back up and into Wolfville. It is there, in the heart of the Gaspereau Valley, that the essence of Nova Scotia’s wine industry walks out from beneath the fog to reveal itself in an elongated moment of clarity. 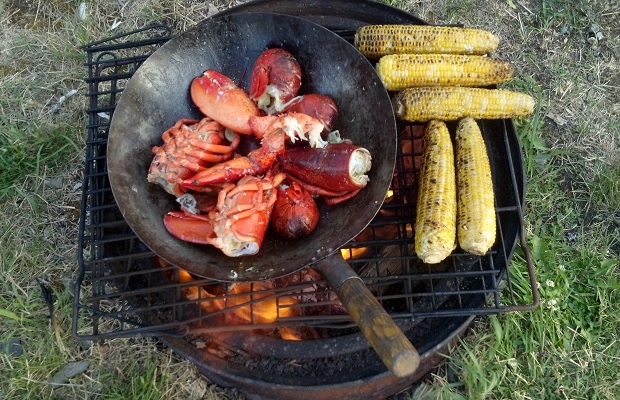 The tractive is a thing to and of itself. The pauses to gather at points along the process remember lobsters roasting over an open fire, a cottage visit with new-found friends, a hike into the cavern of a waterfall and a swim in a tidal river. Memories are made in rites of passage, though in the end, like the photographs, they too will be demurred by time. Indelible stamps they are, cemented in commitment to reaching and by necessity, descending summits. A  road trip to the eastern part of Canada realizes the bigger plan. The key is making it safely home, before the tide rolls in.

Next up will be the wines of the Gaspereau Valley, inextricably linked by a prodigal son come home in the name of Peter Gamble. Until then, take it slow and easy, on the East Coast. 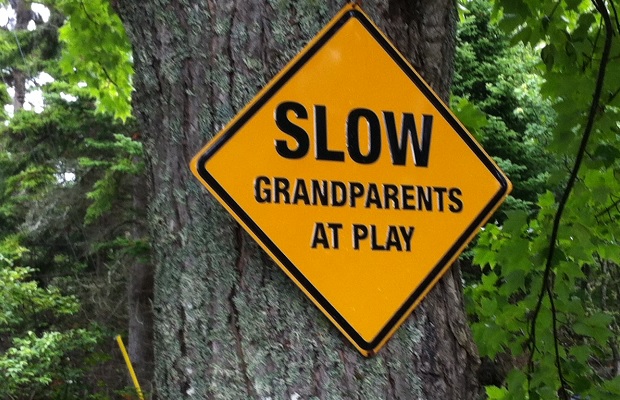 One comment on “The tides that bind: East Coast swing”