Of which camp are you? Have the Nouveau got the hairs raised on the back of your neck? Do you love it or hate it? Are you giddy with annual excitement? Are you agitated by what you feel is a black eye dis to properly produced Beaujolais Cru? Are bubble gum and fermenting banana your go to sensations? If you were playing the Family Feud and asked this question: “What is you favourite winemaking technique?,” would you answer, “carbonic maceration?”

Tomorrow will mark the third Thursday of November and the annual Beaujolais Nouveau release will hit shelves around the globe, including here in Ontario’s LCBO stores. Beaujolais Nouveau, as in barely fermented, Burgundian nether, or to the curiosity seeker, best friend.

Last year’s Godello Beaujolais Presser offered up a quick Nouveau 101. A reminder that the wine formerly known as Beaujolais Nouveau is now simply Nouveau because other wine growing nations have joined the party. Italians produce a Novello and in Niagara they have adopted the Nouveau, if only because the English “new wine” is not the most marketable of phrases. Neither is the Franglaise, Newvin, or Nouwine.

Nouveau has reached critical mass and is now stationed at a vinous crossroads. Long-time LCBO Product Consultant Neal Boven offered me fair facetious warning as I sat down to taste the 2014 crop. “Just be careful, those are some really tannic wines.” Not, but what they are, more than ever, are new Gamay (and Syrah, Merlot, etc.) reds soaked and macerated in maximum thrust, skin-contact extrication for full neon hue and blinding fluorescent glow. In many examples they go deeper still so some wanna be fierce tannin is actually getting through. The question begs. Is that what this perversion of Beaujolais was meant to be, or is Nouveau no longer the correct vernacular? Where did all the Nouveau go? Also, what happened to last year’s clear-cut winner, Seven nation Gamay, Generation Seven? Where did you go Château des Charmes?

Cries of “Le Beaujolais nouveau est arrivé!.” can still be heard and so the 2014 Nouveau wines will be arriving in select LCBO stores on Thursday, November 20. Here are notes on the nine presented.

The rich hue is so like a Côtes du Rhône, a young one mind you, a Rhône Nouveau. The aromas conjure up corner stores and a wonderland filled with bubble gum and cotton candy sprinkled with dried lees dust. Sweet and sour, with a spritz of lime and the bitter citrus pith of grapefruit. Also green tobacco leaf and coffee beans. The concentration is admirable and even though the wine is as raw as open sores on feet hiked in new boots, give credit to the complex nature of the festivities.

Quite consistently the most accomplished if unabashedly contrived BN, year in and year out. The hue has deepened, the extract been probed and the senses muted. Acting like the real deal in southern Burgundy, the Mommessin feigns Morgon with simulated scenes of burlesque and method acting. The grit of earth mixed with the brightness of black cherries may give you reason to believe. If not for the banana blow moment, this could have been as much Zappa as Ween. “A little something to help the time go by. Just a little something to help to keep you high.” In the end, Morgon throws out the counterfeit lawsuit and congratulates the Nouveau for acting like itself.

In the upper echelon of the BN cost continuum and it shows. The sulphur must be blown off to keep moving in the assessment, but that is does. Does not come across cloyingly candied and breathes dark fruits mixed with some plum instead. A touch dusty and adroitly Gamay so there is patronage in the Arts. The acidity is pleasant and adjunct the ripe but not over extracted fruit. Still the hue goes for expression over the wine’s impression but the restraint and the aromatic profiling fit the old school bill. Dry and possessive of quite decent length.

Everything about this Syrah and Merlot mélange is steroidal and an oxymoron within the contextual happenstance of the thematic. So skintastic in extraction and wildly sauvage in aromatic impropriety. A thick, viscous liqueur of mashed banana and Chapati paste. Sickly sour and Lik-m-Aid sweet. It is dry on the finish, I will give it that. But it’s so over the top, if Syrah-Merlot Nouveau can be.

A return to the olfactory confection and the colour of Cru Beaujolais though it is weeks and years away from turning the page and living that dream. The carbonic crafting is in full marauding maceration in this ’14 DuBoeuf. The saving grace is a minor lead funk in the key of autumn plants, trampled underfoot. “Greased and slicked down fine, groovy leather trim.” Quite rustic despite the sugar-coating.

The aromatic waft of this Venetian (Bardolino-Valpolicella) Novello is like fruit and vegetable road kill beneath a truck. So very composted and steaming, it’s as if this is still fermenting away in bottle. This gives the word carbonic a whole new meaning. The texture and body are quite elegant (used with creative license, not in any disparaging way I promise) and the finish is long and puckering.  It is what it is.

The Giocale is an interesting specimen from Abruzzo, qualified as a “regional blended red.” Not exactly Nouveau material is it. With what must likely be MdA as its dominant grape variety, strawberries in many incantations are its focus, in leaf, of near-ripe fruit and mixed with avocado for one odd smelling (and tasting) milkshake. This has a young Negroamaro or Nero d’Avola feel, but also a raisined, pruny appassimento appointed sensation. There is forest floor in its nose, vineyard funk in its flavor and tension in its voice. It’s already evolved, slightly oxidized and needs to be consumed with haste. That said it shows some interesting complexity and even a few stanzas of structure so give it points. It’s also correctly priced. 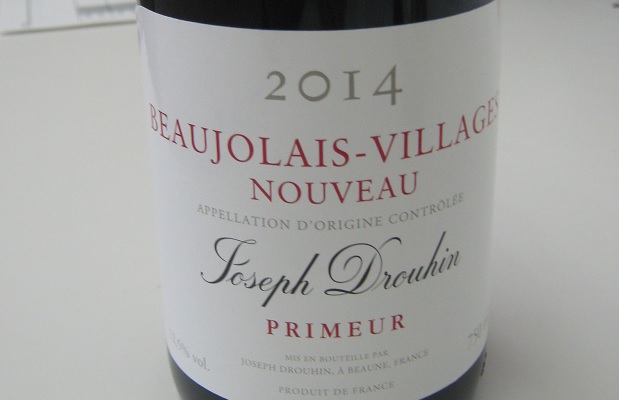 The paid piper in the group of nine leads by example. At $16 Drouhin had better fashion an exemplary Beaujolais Nouveau to justify the price. With so many just plain stellar $15-16 wines on the market today, the caché  of just recently pressed Gamay juice spiked by 12 per cent alcohol is not enough of a presser. Does this Drouhin raise the bar? Yes, that it does, but not in the way it should. There is clearly developed acidity, tannin and quality grapes in this pour. What happened to Nouveau? Why so proper in pH, TA and so low in RS? Where did the new juice go? Sorry Mr. Drouhin, if I want Gamay this good I can buy it any other week of the year.

This Duboeuf more closely resembles what Beaujolais Nouveau should be and has been for a near-half Millennium. Like ripe raspberries and bananas mashed together, shaken and even baked into short pastry for a quick cobbler or clafouti. The most aromatic on the table, this reminds me of years gone Nouveau by, of bygone Beaujolais that has just kissed the tank and been kissed by the yeast meets sugar marriage of a young wine. Hits the mark, finishes dry and leaves you not wanting anything more.