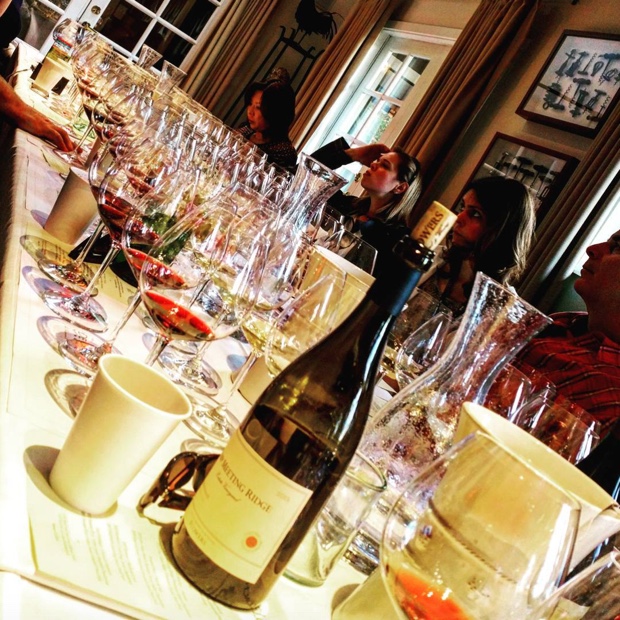 No two wines from Sonoma County are the same. I believe that statement to ring expressly true and so should you. Jean-Claude Boisset saw the potential in Sonoma and created Boisset Family Estates with singular viniculturaliste swagger. Boisset Family Estates is led by Jean-Charles Boisset, who is also President of Boisset, La Famille des Grands Vins. Eight wineries make up the California collection, including DeLoach Vineyards. It was there that we tasted eight conspicuous examples of Pinot Noir and Chardonnay.

Mapping a cru systematic out of Sonoma County is a massive and seemingly boundless undertaking. This wine country section of Northern California is one of the most complex regions in the world, with valleys, plains, ridges, slopes and mountains of every aspect. There are more single-vineyard wines pulled from vines dotting micro-climatic, highly specific sites than anywhere in the world. Or so it seems. Unlike Burgundy, so many vintners farm and/or produce the only wine made from that specific parcel. The permutations of cru definition are multiplied 100-fold. The diagram is drawn with near-infinite numbers of circles and lines.

The multeity of style and the illimitable viticultural approach illustrates how Sonoma’s 16 AVA’s (American Viticultural Areas) are a study in variegation and variance. The multifarious geographical scope of coast, penetrating valleys and mountain ranch land conspire to design the impossibility of squeezing out clarity from a region in direct contrast to concepts that choose to exhort compounding synchronisms.

Related – Sonoma peaks from out of the fog

The last time I approached the Sonoma expostulation I talked of course about the fog. “Sonoma’s fog is a stern exertion of soda and salt and when its atomic dipoles get together to dance with ripe grapes and the puffy gaieties of yeast, the syntagmatic rearrangement in the region’s wines are all the merrier and made most remarkably interesting. Fog complicates and makes complex the ferments from Sonoma’s hills and valleys. The second fiddle status to Napa Valley’s hugeness is both ridiculous and absurd. Sonoma Chardonnay and Pinot Noir is already known for its kinetic inquisitiveness but other varieties are also gaining major traction. Cabernet Sauvignon, when ripened upwards of that fog and yet inextricably linked to the miasma, gains a level of synergistically precipitated elaboration that blows Napa out of the water.”

That still holds water but it’s just not that simple, nor is it a matter of direct comparison. Sonoma’s cool-climate condition is incomparable to other aptly-named wine regions, from Napa to Niagara. The coastal fog bank blows in, “accompanied by cold air capable of such rapid temperature shrinkage it can be measured by swings as much as 50 ºF. The manifest vital spark that runs through all of Sonoma County’s fiords and chords, spuming with an irrepressible puissance is that fog.”

When I returned from California in February I wrote “the most pertinent question now in my mind is this. Can European wine keep up with the fictionality of North American reality?” Unearthing discoveries from idiosyncrasy to heterogeneity is what people want and it’s not just rambling wine journalists or thrill-seeking sommeliers who are looking for wine-contrariety nirvana. Craft is in. Small batch, low-production, around the corner from nowhere, never heard of that is what sells. And Sonoma has got more than enough answers to last for centuries.

Which brings us to the discussion centring on Pinot Noir and Chardonnay, the varietal darlings of Sonoma County, especially when the vineyards that grow them are tied directly to the fog’s greatest chaperone, the Petaluma Wine Gap. The different strokes inherent to the Burgundian expatriates raised on the coast, on inbound slopes and on craggy ridges is mind-numbing. The thread that ties them together is related to the fog but it is not enough to formalize, generalize or philosophize a unifying theme. Bring the wines of DeLoach, Patz & Hall, Flowers and Hartford together in one room and you might expect some repetition. I found none, save for one mien of chiaroscuro connection. Creep out from that shadow and find a world of deference and difference, from Pinot to Pinot and from Chardonnay to Chardonnay.

In conjunction with California Wines Canada, The California Wine Institute, Sonoma Vintners and Boisset Family Estates, a group of Canadian journalists and sommeliers were invited to DeLoach Vineyards to taste four Pinot Noir and four Chardonnay. Here are my notes.

Camp Meeting Ridge is what Director of Winemaking Dave Keatly considers a “remarkable site” with shallow soils, a product of volcanic and tectonic activity. Even with two plus years tucked away this persists as a tight, tense infant of a Chardonnay suspended within a reductive environment. The trenchant draught seems to emanate directly from the wildly imagined vineyard, with the scent of white flowers and ripping green fruits, from lime to mango. Focused, linear, compact, wound, wire patrolling Chardonnay. This was bottled 17 months after pick with a tank aging component, for phenolic structure and a healthy presentation of fruit. Certainly the most Burgundian (from Boisset Estates and in the greater Sonoma sphere) with engaging spice. Drink 2016-2024.  Tasted February 2016  @FlowersWinery  @rogcowines

Older vines (planted in 1998) provide the wisdom while winemaking (Dave Keatly) encourages atticism. A 50 degree, nine day cold soak, native fermentation and 18 months in (35 per cent) new French oak lay down the parameters. Post nurturing it’s all about time travel back to nature. Back to the organic and biodynamically farmed extreme (with elevations of 1,400 to 1,875 feet) Sea View Ridge Estate Vineyard. The site is antediluvian, a former sea bed where ridge tops are shallow and rocky, lower blocks are volcanic and high ones filled with broken sandstone and shale. Yields are naturally, unavoidably low. This Pinot Noir is defined not just by its elevation but also by its proximity to the coast. Sea Ridge is not on the label but will eventually be. The pleasure and maritime elegance is winnowed from the start. There is no need to wait for it. Quite amazing considering the young age of the vineyard. Very pure, almost impossibly so and yet, just a bit of sweetness softens and demures. A mineral driven and lithe red though the hue is not a harbinger for what will follow. The tannic structure will let this go at it with purpose and drive but without haste. Drink 2016-2023.  Tasted February 2016

Cool, infinitely linear Chardonnay that when considered in mind of Dutton Ranch and Hyde Vineyard, is prepossessed of a creamier, open-door policy. From an easy vintage to ripen, it was treated with grand respect, first with whole clusters and then small barrel fermentation, 100 per cent malolactic, sur lie. From fruit on a Frei Road farm owned by the Martinelli family, an east facing, rolling vineyard on the western hills of the Gravenstein highway. The soil is fluffy Goldridge,”like walking through flour, volcanic, porous and dusty up to the knees,” explains Donald Patz. Rarely does Chardonnay seem ferric but Zio Tony carries that metal from a feeling deep into that soil. The output is small, between 300-500 cases a year. The high acid site makes for Chardonnay incurrent as toasty and taut, tense and terse. The open door will be agape after its need for some time to unwind. Drink 2017-2022.  Tasted February 2016  @PatzHall  @TrialtoON

From a vineyard with boundless potential, still young and procuring youthful wines. All necessary energies have graced this Pinot Noir, nothing has been left behind or filtered out. The sweetness on the nose is an intoxicant and a bit of reduction joins in, realized upon a sniff. There is anxiety in both its ripeness and its tannin though the acidity plateaus on an even stephen hep. The Gap’s Crown is furthest east of a set of four vineyard cousins, significant for its rocky hillside essence. Done up with 15 per cent whole clusters and indeed it’s not entirely fruity, anything but blackberry juice, leaning more to the savour and the chaparral. With thanks to the Petaluma Wind Gap bringing in all that cool air. The Sonoma Coast, fog, mineral, Patz & Hall style. They all “gather up strength, as thoroughfare gap. No distance, it’s the ride.” All towards a crowning achievement. Sometime early in the coming decade towards that end. Drink 2017-2024.  Tasted February 2016

Though this coils in tight wind to a certain degree there is more cream, increased silken texture and a more obvious dose of newer oak. An all indigenous ferment, 16 months barrel fermentation and sur lie. There is a density of all the aspects; aroma, flavour and lees texture. Add the parlay of barrel feel and you get so much layered density and character for your money. The slightly southwest facing vineyard that runs down to Green Valley creek, “in a little bowl” is named Fog Dance says winemaker Jeff Stewart, “because it’s a lot sexier than Jones or Ross Road.” That or the time lapse view of the fog coming in over this 500 foot ridge top. The vines grow in a toupée of yellowish, fluffy soil, farmed organically, of no ferric adjunct and impelling citrus drive, but also exotic with a heavy accent. Like a margarita, yes, it has that too, thought the thought of Chablis runs in its RRV veins. Drink 2016-2020.  Tasted February 2016  #hartfordfamilywinery  @HartfordWines  @RRVWinegrowers

Pinot Noir from a hillside vineyard in full vaporous view and under the influence from the omnipresent swirling samba of Sonoma fog. Pine and black combine for an elevated, revenant-rich, full-bodied and warm expression. Also possessive of a reductive, almost rubber-accented note but on second thought, even more so of meaty and smoky flavour. From classic Goldridge soils, planted in the 1990’s, from the holy trinity of Dijon clones, 667, 777 and 115.  The sidling saunter of a blood orange note separates itself from the rest. So very viscous and bone dry, this is a big Pinot Noir, even for Hartford. It could use another year in bottle to collect composure and then drink with style for five more after that. Drink 2017-2022.  Tasted February 2016

Rich and decadent, into some simplicity, supple, safe and yet savoury Chardonnay. The taster is aware of the lees, malo and barrel, all hyper present and apparent. From loamy soil with a clay layer two or three feet down, these are vines that must be controlled to keep the roots from descending too far. Beautifully presented Chardonnay with no smoke or mirrors, from whole clusters, native yeasts, 14-15 months and 40-50 per cent new oak. A classic drink young, glass half full expression. Drink 2016-2018.  Tasted February 2016  @DeLoachVineyard  @LiffordON

Eric Pooler grows Pinot Noir from 20 year-old vines in Huichica Loam for DeLoach on the Olivet Ranch Vineyard. This estate block is farmed organically and biodynamically and has been owned by Boisset Family Estates since 2003. The vegetal aspect of this Pinot Noir purports strength, umami flavours and an abstract celebration of the vineyard’s health from metabolic growth. From safflower through barley and into grapes, the structure and conditioning of this Pinot has travelled from medicinal, through cereal and now into fruit richness. Good 2013 ripeness and extraction passes through a toll of sweet and sour complexion. The reduction and meaty vinyl is in here as well. There is a definite thread running through the De Loach Estate, the Hartford Fog Dance and the Patz & Hall Gap’s Crown. Only the Flowers Sea Ridge doesn’t seem to have it. It is more than fog; it’s the Pinot Noir version of chiaroscuro, in which strong contrasts between light and dark affect the greater composition. Picked clone by clone, block by block, the last of which saw whole cluster fermentation, adding weight and tension. Drink 2016-2019.  Tasted February 2016