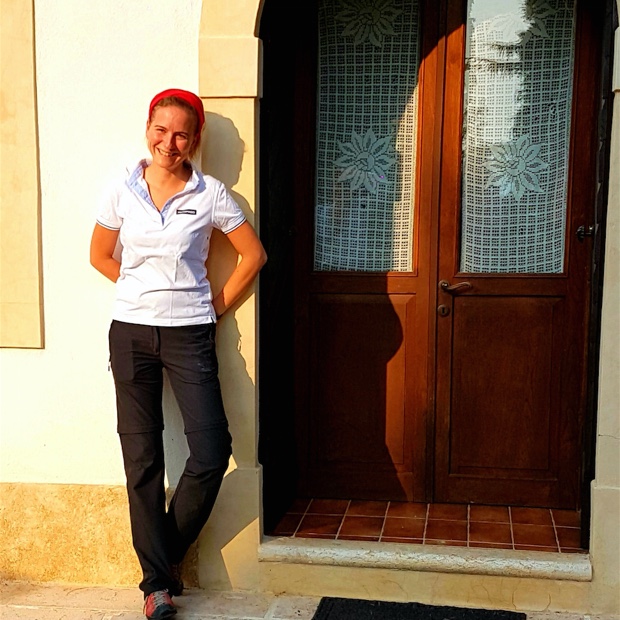 I have been thinking quite a bit lately about certain producers I have met through the course of my recent travels. Every wine region has its stars and while it’s quite rare to have a bad visit or negative experience, some visits simply turn on the lights.  Sometimes there comes along a winemaker and a place with a special kind of light. Last September I found such an experience on a windswept limestone ridge in Valpolicella. Massimago.

Words of advice. “Lasciate la vostre ansia e le scarpe al cancello.” Massimago is the dream of Camilla Rossi Chauvenet, in Mezzane di Sotto found in Valpolicella’s Mezzane Valley. “A little heaven in the north part of Italy.” Massimago, from the Latin “Maximum Agium,” the maximum benefit. Camilla considers Mezzane as the most secret and wild of Valpolicella and her family’s land has belonged to the Cracco Family (on the maternal side) since 1883. In 2003 she began to transform the company into its modern-day renaissance.

Now (and I believe since 2014, officially) organic though that has always been the philosophy, the new generation believes in the Eminem credo, one shot equals one opportunity. Young guardian and creator of Massimago Camilla Rossi Chauvenet’s  roots are never forgotten, emotion and creativity define identity and complexity will lead to longevity. On her website Camilla writes, “Massimago and I are tightly holding our hands, step by step, sooner or later we shall arrive, but please do not hurry us, time in nature is slow and unstoppable.” Truth.

There are 28 hectares of vineyards, olive trees and woods. The soils are a nominative palette of limestone, marl and clay. Traditional varieties (corvina, corvine and rondinella) cultivated in Pergola are transformed into wines assembled from only estate grapes. A wine relais experience on site confirms Massimago as a Veronese wine experience hotel. As noted in Italian above there is but one rule. “Leave your anxiety and your shoes at the gate.”

On that September day I paid a visit and sat down to taste seven Massimago wines with John Szabo M.S., Joshua Corea, Annette Bruley, Jules Garton, José Luis Fernández, Lauren Hall and Nick Chajoglou. I could hardly contain my enthusiasm and these wines changed everything I thought I knew about Valpolicella. Così grande, così perfetto. I saw the light. 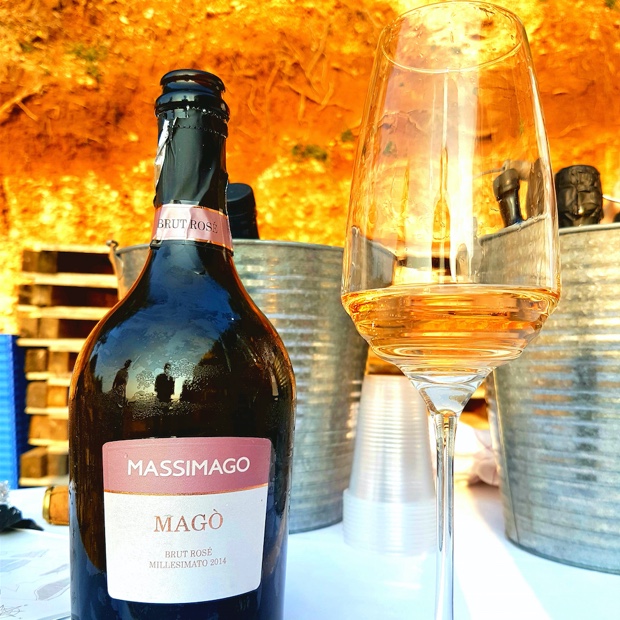 Magò is Camilla Rossi Chauvenet’s Charmat Method, 100 per cent corvina blush sparkler and another Massimago wine born of dreams and initiative. We climb to the top of the exposed white limestone ridge to sample this unmitigated refreshing fizz, light, aromatic and ethereal. To say it does wonders for grape, method and place would be the correct way to explain the situation. Magò sees 10 hours of maceration and eight months of lees aging. Though intentionally sweet (10.4 g/L RS) it is expertly balanced by acidity and even more so by exceptionally dry, limestone-conditioned extract. This is the key and the kicker, that and elevation, on a windswept, exposed geological place of wonder. The setting and presentation notwithstanding this is an impressive effort from the simplest of technologies at the hands of the soft-spoken and the kind. So yes, do enjoy this with “an elegant dress, the magic of waiting and the taste of freedom.” Or whatever romantic notion you prefer to call your own. Drink 2016-2019.  Tasted September 2016

Few reference points can prepare you for Massimago’s style of Valpolicella so simply use this as the ingress. Plucked from vines in the Mezzane Valley in the east part of Verona province, rising from the village of Vago towards Mezzane di Sotto. Camilla Rossi Chauvenet’s precocious blend is the crisp, crunchy, pure as driven white limestone portal into the soils laid out in amphitheatre vineyard grid. Camilla uses only stainless steel tanks here to accentuate a basal clarity brush stroke on her Valpolicella canvas. This from a selection of the grapes that will not enter the Amarone process, the second and third pass harvested bunches. Cherry and silty saline mingle at the interces of limestone. How can you miss the white stone in the naked Valpolicella? You can’t. It’s without make-up, transparent, naked to the world. The wine speaks a natural vernacular and the land is spoken for. If villages-level Bourgogne were made like this all would be well in the world. Lithe, delicate and perfumed. Drink 2016-2019.  Tasted September 2016 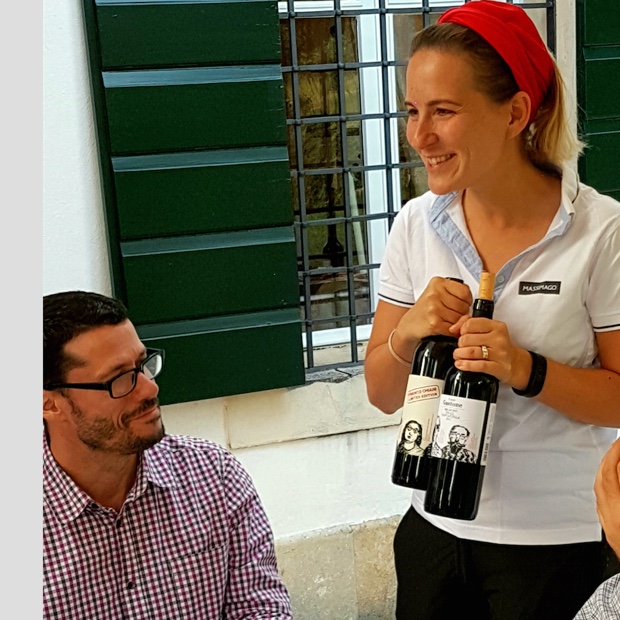 Godello can hardly contain his enthusiasm for Camilla’s Valpolicella

Profasio establishes new territory for Valpolicella Superiore from Mezzane Valley fruit in a wine over dinner “that lets you talk.” A careful and specific selection of Corvina, Corvinone and Rondinella (65/30/5) is subjected to “un leggero appassimento,” or a “slight withering” from one month of drying and the rest kept thankfully and respectfully fresh. The child is raised in stainless steel for five months plus one year in 2nd and 3rd passage barrels. This is Valpolicella meant to partner up with dinner for two, replete with secret recipes and crossing glances. “We feel the appassimento method is about levels of aromatics,” tells Camilla Rossi Chauvenet. In such a contrary to Superiore belief we find freshness and anti-jam the goal and as a result, the wine is allowed to tell a story. A script written cursively, crisp and pure, crunchy like the normale with an addendum of aromatic profiling; cherry, leather and red citrus. Profasio is a wine of good temper and vision (and could mean profezia, or prophecy, or perhaps a surname in reference to Dante and the Veronese ebraico’s Almanacco Perpetuo), a Valpolicella into a second level of contemplation, but not too much. The wine causes no worries, no anxiety and shoes are left at the bottom of the mountain. Profasio with its hint of dried momentum is a wine of communication and a new way of communicating. Drink 2016-2021.  Tasted September 2016 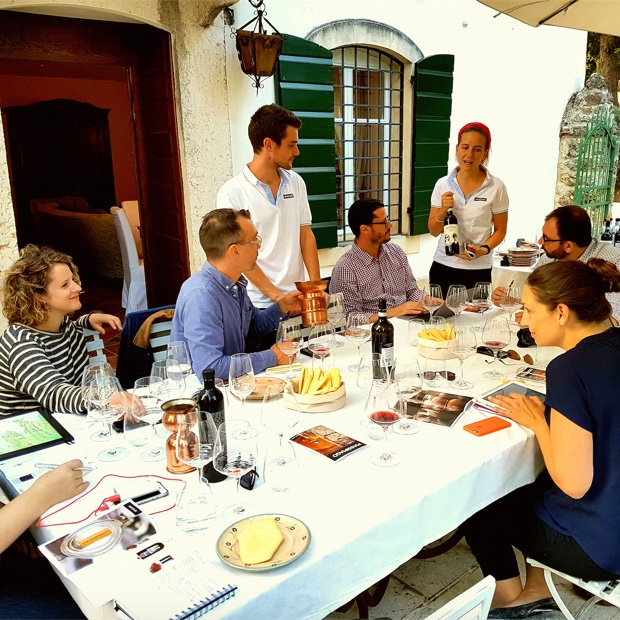 Yet another new launching point, this time for the much maligned Ripasso category, acquiesced through the fresh urgency of the whimsical Marchesi MariaBella. The fruit is borne of a a much earlier ripening vineyard outside of Massimago, perched only at an insignificant 100m on Argileux soil. This a Ripasso I will wager large you have never tasted before. La Bella Poesia, “is different because its literary destiny has followed a strange path.” To say that a feminine disposition, temperament and engagement fills not just the aromatics but also the texture would be a Valpolicella understatent of this early century. There is virtually no dried fruit on the nose; there is more tension than the two classic Valpolicellas which is both counter-intuitive to terroir and to methodology. Ripasso needs to carry both weight and tension. It needs to have some elegance. It requires acidity and freshness. This walks that very line and it will age gracefully and with beauty. Incidentally to answer the query of whimsy each character on the label represents the democracy of the proletariat. Drink 2016-2022.  Tasted September 2016

This is Camilla and Matteo. They will change everything you thought you knew about #valpolicella

If at first the Conte Gastone Amarone seems to be the freshest Amarone ever tasted it will in fact creep up and get upside so don’t be fooled. It is in fact a brooding, sulking, contemplative mess of intense fruit. The assessment is magnified when compared to a barrel sample of 2015 tasted minutes before. With no disrespect to carefully raised and quite specific red fruit the 2011 Amarone punch drunk (16.5 per cent alcohol) love can’t help but overwhelm as is its want and ilk. Here the Massimago conditioning of (65/30/5) corvina, corvinone and rondinella is treated with 100 days of appassimento, 30 months in large botti and smaller French barriques and then 12 further months in bottle. Camilla’s suggestion would be to enjoy her Amarone “brainstorming with friends, feasting on dreams and quiet omnipotence.” While hers is indeed more cerebral and contemplative inducing than most, 2011 is just a beginning and fashioned as a means preparing Valpolicella towards an end that will begin with that fresh maker of a ’15. Drink 2017-2024.  Tasted September 2016

“I gotta have some of your attention, give it to me.” @massimago #special #brassinpocket

The packed and punchy Massimago labeled simply Amarone is the stronger one and with deferential ability manages to bring the Conte Gastone into bright, fresh, highlighted, beautiful infrared light. Not that the fruit is any less presumptuous or magnificent but considered side by side here it is really just acidity and tannin that drives the intense machine. The suggestions of “brainstorming, feasting and omnipotence” are more than apropos for a wine of preponderance, indulgence and power. The young wine is rigid and so full of fruit, an impossible combination in Amarone and like the Gastone is just a precurser to what will be coming in Camilla Rossi-Chauvenet’s dreamy Valpolicella future. Drink 2018-2025.  Tasted September 2016 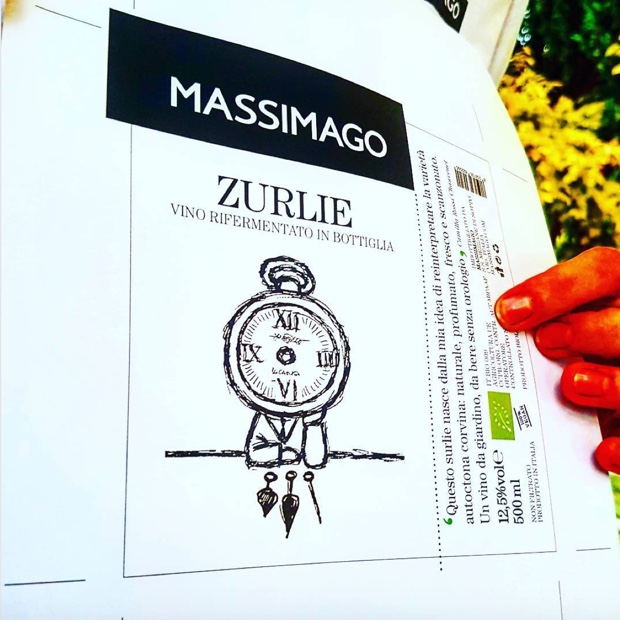 Zurlie is Massimago’s newest product, a 100 per cent confondere corvina made in the sur lie Vino Rifermentato In Bottiglia style. The fruit is 100 per cent 2015 and until now, no one in Valpolicella has tried to make sparkling wine in this confounding style. Passes through secondary fermentation with sugar added into the bottle and then a seal under crown cap. Extreme acidity abounds because it’s accomplished sur lie, a wine to clean your mouth at the end of a wine tasting. Delicately raises a perfume almost after the fact from an easy drinking picnic wine stolen straight from the fridge. So much fun and just extreme freshness, in a way cider does but also cannot do. This speaks at the highest level of simple brillance. A four year dream in the making. Drink 2016-2018.  Tasted September 2016 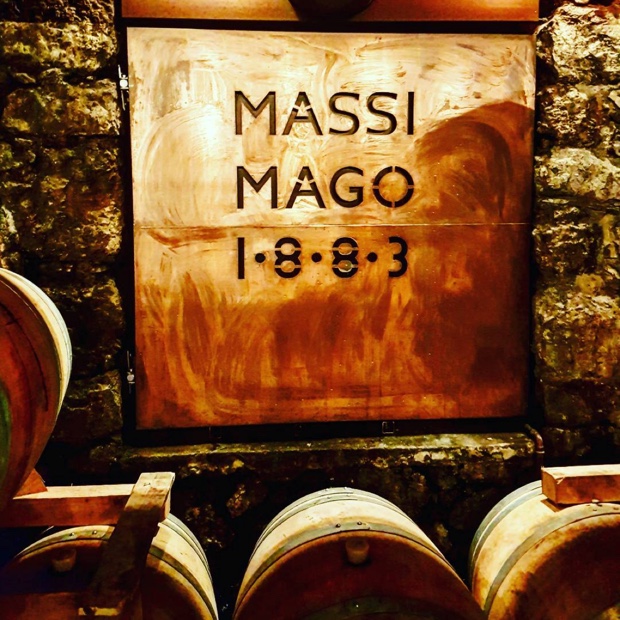