With Chris Waters as moderator, guest speaker Hector Vergara delivering the keynote address and a Chilean panel of eight winery representatives talking up their wares, the Wines of Chile road show trekked en masse through Toronto’s ROM for the annual cavalcade in exhibition.

Related – A Chile wind is blowing

Waters is Editor of VINES Magazine and author of a weekly wine column at canoe.ca. Vergara is Latin America’s only Master Sommelier & President of the Sommelier Association in Chile. The council of eight winemakers and export managers expounded on Pacific ocean mists, soil composition, varietal trials and expansion to the new Chilean terroir.

The theme of the 2014 edition of the WOC travelling wine expo was “discover diversity.” The breath of fresh air came by way of the opportunity to taste samples of the new Chile; from emerging regions and appellations, from varieties not expected to show in Toronto and from chances being taken. Wines from Huasco, Itata and Pumanque are not household names at the LCBO or in this city’s restaurants. The successes of Chile’s (primarily central) conspicuous regions are well-documented; Maipo, Rapel, Maule, Curicó and Cachapoal valleys. The Aconcagua, Casablanca and San Antonio valleys have found their own prosperity. The 2014 Wines of Chile experience will help impress emerging regions and purchasing diversification upon both consumer and licensee habits.

The cross-section of wines poured at the seminar offered a unique perspective into the Chilean portal, even if behind the scenes back in Chile you just know there is so much more to seek, discover and uncover. Montreal Gazette wine scribe Bill Zacharkiw wrote last week, “I saw cracks in the wall…three years later I’m back, and that crack has become a deep fissure.” Zacharkiw visited Chile for the first time in three years and was privy to a Chilean wine revolution. Bill witnessed first hand the changing face of Chile: winemakers rediscovering their rich heritage. He found plantings from old vines and revitalized vineyards that had been producing nothing but cheap table wines. The ROM seminar presided over a giant leap in exhibiting aspects of that vicissitude for Toronto but missing from the tasting were some exceptional and virtually unknown producers of the New Chile.

Many of Chile’s growing areas are driven by the mist (like Sonoma fog) which might go away by 11 or 12 pm, but according to Vergara, they “create the conditions for slow ripening.” Along the coast there are granitic soils, very good for Syrah. Limestone soils add new dimension to the wines. Cold air comes down into the valleys from the Andes mountains, to maintain freshness and to add aromatic complexity. The role played by the Pacific Ocean is also extremely important. Salinity is rampant in Chile’s wines.

Eight wines were poured at the Wines of Chile seminar. Here are the notes. 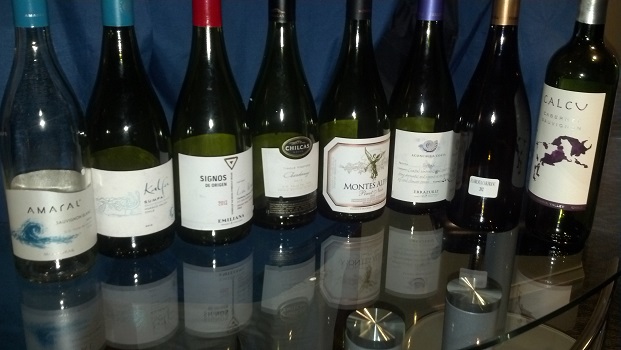 A jumping and hopping Sauvignon Blanc, at once spicy and then fruit fresh. The aromatics rise from the San Antonio Valley vines, cooled by the Andes run off, in irrigated mist. The piquant puissance never quite relinquishes power to the crisp orchard drupe. Capsicum and especially white pepper dominate. A chew of white flowers fills the palate though it falls away quickly, like a shooting star. More than serviceable and user-friendly. Tasted October 2014  @MontGrasChile  @TKGCanada

High end varietal placement, in geography and in market positioning. A new project for Ventisquero and winemaker Alejandro Galaz, from Chile’s most northerly wine growing area in the Atacama Desert. An arid yet verdant Sauvignon Blanc watered by the Huasco River, 20 km’s from the sea, 700 km’s north of Santiago. The first vintage was 2012. Only 600-800 bottles are being produced, that is until they have learned more about how to manage the terroir of the desert, like making wine on the moon.The wine flaunts its chalky soil with alluvial stones and red clay. The Camanchaca (a thick fog on the coasts of Peru and Chile) comes in every morning and aids in the long ripening period. The mineral pierce is frightening in as much as can be found in Chilean SB. High salinity, from both the soil and the water. A veritable salt spring without effervescence, replaced by evanescence and fervent vigor. Kalfu means blue, Sumpai is the name the mapuches gave to the mermaids. Finishes with a roasted green pepper note in neutral citrus, with thyme and peanuts. Yes, peanuts. Approx. $40. Yes, $40.  Tasted October 2014  @vventisquero  @TandemSelection

With a wine like this multi-varietal white blend, Fernando Castro explains “we’re going wide in a narrow place,” pushing boundaries, exploring new challenges. Diversity. From the western part of Casablanca, out of rocky and granitic decomposed maritime soils, the mix is (all approximations) Chardonnay (65 per cent), Rousanne (13), Viognier (12) and Marsanne (10). A healthy 33 per cent of the ferment is aged and housed in concrete egg fermenters, but also some French barriques. Imparts an oiliness on the palate. Chardonnay is more than evident, the sweetness in Rhône aromatics are ladders from which to climb, buoys from which to get lifted. A wine that does not play safe. Some spice, plenty of full palate sweetness so this needs a mess of fish and seafood in an aromatic broth. The alcohol is a generous 14.7 per cent though it has enough acidity to keep it aerified. Big wine. Really big wine.  Tasted October 2014  @VinosEmiliana

The inaugural vintage of the Chilcas Chardonnay hails from the northern most aspect of Chile’s southern most region, a cool climate 18 km’s from the Pacific coast. The granitic soils are variegated with alluvial and sandy loam aspects for complex gain in this 100 per cent single varietal wine that spent,12 months in oak. A partial malolactic fermentation means creamy but that texture is subservient to the aromatic profile. Itata is a 16th century planted vineyard (for the region) though this vineyard is only 10 years old. Average rainfall is on par with Bordeaux but the majority of the rainfall is in winter, not in the growing season. Drainage is good due to the slope of the granite soil. Has that creamed sugar brûléed sensation and is nearly vegetal, like buttered, fresh corn with salinity and spice.  Tasted October 2014  @ViaWines  @KylixWines

This is from fruit drawn 10 km’s from the ocean. Morning fog helps with maintaining acidity, though aridity is the biggest challenge. A dry heat and a dry paint are apparent, though low yields produce a concentrated red, of dry herbs and dry ochre. Terrific mouthful – very Sonoma, in sweet raspberry, cherry and strawberry. Very Sonoma. More than decent length but not the most complex. Really approachable and lingering so it is worth several visits, in each glass, second glasses and subsequent bottles. Some new (20 per cent) oak. Cool climate Pinot Noir done in a warmer climate style.  Tasted October 2014  @MontesWines  @ProfileWineGrp

Natural and modern in every respect. From schist rock over a clay base and out of a warm vintage, “to maintain the character of the wine.” Relish of richness and quite ripe with touches of wood resin, sinew and roasted meat, though it’s more OZ than Rhone, with less smoky beats and cured meat. Good acidity and slightly sweet. Cake-reductive as to an Aconcaguan Cabernet Sauvignon but enough spice and splinters to warrant aging towards increasing value. Really spicy finish.  Tasted twice, September and October 2014  @errazurizwines  @Dandurandwines

Pumanque is located in Chile’s Colchagua Valley and was granted Doc status in September 2012. The soil is quite granitic and the exceptionality of the new terroir is gaining traction with proponents of symbiosis for Cabernet Franc. This Cabernet squared blend is Cabernet Franc (55 per cent) and the remainder Cabernet Sauvignon. Dark and pitchy, with much aromatic mince in mint, creosote, graphite, black but not green pepper, wood resin. The rapt wrapping bristles in angles and bitters. Chalky, grainy and needing time because it is quite tannic. Blessed with the most length of the reds on the table. A question of the iron crushed red fruit may arise but five years will certainly be an aid. So very mineral.  Tasted October 2014  @SantaRitaRD  @ImportWineMAFWM

Calcu means “healing doctor” in Mapuche and while this may not be the poster wine prescription for cold and flu, it will cure an ail or two. Winemaker Rodrigo Romero adds Carménère and Petit Verdot to the varietal mix, for just enough structure beyond the fresh and fruity Cabernet. It also brings together a spot on varietal tendency, in dusty, grainy tannin, bitter tonic tinge, cool in the middle, but warm in girth and all around its edges. Spiced and piquant. Young, with decent acidity and though it will settle in a year or two, that will be the limit of its range.  @CalcuWines