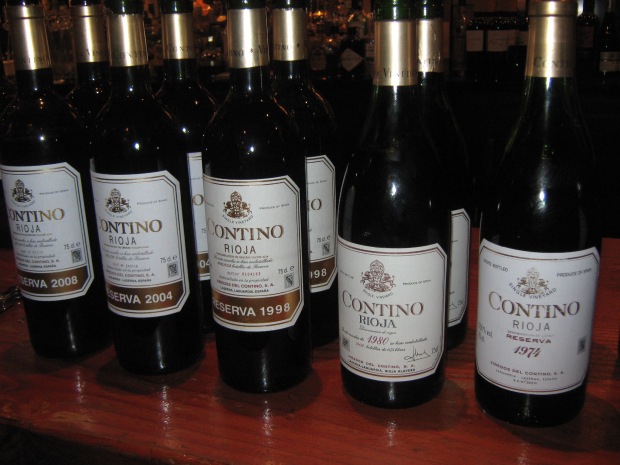 Near the end of September, at the invite of two exceptionally grounded wine men, Rob Groh and Derek Kranenborg of The Vine Wine Agency, I attended a tasting at Cava Restaurant with Technical Director Jesús Madrazo of Rioja’s Bodega Viñedos del Contino. With former Cava Chef Chris McDonald providing the worthy and soulful snacks, Madrazo poured eight wines. Eight to leave lasting memories in impression. Edibles to boot, complex concentrations by Chef McDonald with his last Cava days coming near. Everything about the tasting, in both wine and food, was intense. I hope all were paying attention.

Two of chef’s hors d’oeuvre-style compositions were Foie gras and partridge Croquetas and Frogsicles with Pimento Alioli. Both unique, both instrumental in elevating the old and wise Riojas upwards atop a rightful pedestal. The wines of Contino are very classic Rioja, at times understated and at others overwhelming. Contino’s Rioja buzz with energy and verve. They are very alive. They ooze earth and soil.

In 2006 Madrazo began producing the white wine experience. The challenge was in getting approval from the board of directors. After much experimentation, the first vintage came in 2010. Grown on calcium carbonate soils, the white Viura draws energy from stones, some larger than the solar collecting galets of Châteauneuf-du-Pape. The rocks are the heliacal conductors to the vines, creating a paradox, of water loss and energy giving life. This, accomplished through dry, organic farming. “That’s how we play the game,” notes Madrazo.

At the Cava tasting, the ageability of the Riojas was the concept under investigation, but it was the three others wines poured, the flotilla leaders Blanco, Graciano and Viña del Olivo that really drove the point across. Longevity is the key to the Rioja heart. The Rioja Reservas are the soul. “In Spain,” says Madrazo, “we (continue to) fix everything. We release our Rioja in the 5th year.” Here are notes on the eight wines tasted.

The third vintage of Contino’s crown jewel white is (80 per cent) Viura with Malvasia (five per cent) and Garnacha Blanca (15). The latter will bull its way into future vintage mix with incremental proportion as a result of increased plantings. “The Queen” gets right up into the face and nose, indicating success for its primary goal. To seek a capacity for aging. “Viura can age,” insists winemaker Jesús Madrazo. “Here I can see at least six years of life, maybe ten.” The Blanco has a meddling mid-palate metal and creamy sensibility. Big (90 per cent new oak) barrels housed the wine for six months to seek its second goal; fruit spiciness. This effect is magnified by the south-facing, down to the river slopes, one of the warmest areas in Rioja. The third objective is acidity but with the malic tendency well-managed, to seek equilibrium. The single block Garnacha and Malvasia elevate and balance out the estate’s omnipresent, all over the map Viura. The paradox lies in the terroir, where hot, solar conduit stones cause evaporation and yet give energy in simultaneous activity. Old vines (some as much as 70 years) draw and release, draw and release. The ebb and flow in ardor gives this Blanco verve and it is showing with style right now. It will live as Jesús said it would but it’s life will be hard and fast. Drink now and for three or four years.  Tasted September 2014

From a late harvest (two to four weeks behind the norm), the ’08 is an example of the philosophy yet entrenched in the past, with a desire for pure quality, regardless of the picking time. The conditions meant no single-varietal Graciano bottling and only a small case load of the Viña del Olivo. Quality was essentially earmarked for the Reserva, scoured from 62 hectares of Estate Tempranillo. The vintage is defined by straight up red fruit with some spice and a warm-climate, tree bark/resin effect. The wine’s personality come from out of the nerve centre’s tangy inflection. Though it’s a touch warm and zealous of alcohol (14.5 per cent), it speaks in cants of the Contino chateau style.  Tasted September 2014

“If it’s not broke, we fix it,” admits Jesús Madrazo of Contino. The estate’s ’04 says exactly what it should and it must. Old barrels (50-50 French and American) plus two years in bottle bring out the hard vine life heartbreak and hyperbole in fruit grown on calcium carbonate soils with stones bigger than Les Galets of Châteauneuf-du-Pape. Stones that heat up from the sun, acting as solar conductors to the vines. Acidity may have been compromised but not structure. There is Rioja Alvesa sweetness, set against a whiskey town backdrop. There are plums, prunes and Phở. Yes, this is a quixotic and exotic Contino, ripe, spicy, floral, meaty but not gamy. Roast pork, Vietnamese style. Immaculate of youth, of original energy and of garrigue. The 2004 Reserva tells the Contino story like Ryan Adams sings about a broken heart. “Some things are born too strong, have to learn how to fight.” So, the Tempranillo will say, “you’ll have to excuse me if I break my own heart.”  Tasted September 2014

Not unlike the book that wrote ’08, the vintage challenged with cold weather during harvest, this coming on the fits meets stops on heels and tiptoe starts that defined the overall growing season.  A first flawed bottle aside, a second one opened is musty in its own ancient and charming way. With only 10 per cent Graciano in the blend, this here is essential, old-school Tempranillo. Beyond the dust is a round and smooth elixir with a ferric vein of animal funk. There is liquorice and there is chalk. The grain of this Contino is like liquified barley or bulgur, with an earthy faro aroma, a creamy texture and long on glutinous structure. Earth keeps fruit in subterranean submission, though there will always be hints of dried plums and flowers to sustain life.  Tasted September 2014

Here the Tempranillo has walked the sands, survived the winds of time and has arrived at the sultanate’s tent, exhausted, somewhat delirious yet basking in the accomplishment. The tapestry woven by 34 years of development has laid on a platter a veritable feast of dried fruits; prune, apricot and date, all chewy and densely concentrated. A diesel fume aroma indicates a modernity evolved and the oiled track shows the way out of Damascus (or in this case, Álava). The ’80 is a bit funkified too, with great acidity and length that lingers for a most amazing amount of mouth time. Dried flowers, namely violets define the perfumed finish. A Tempranillo possessive of exceptional survival skills.  Tasted September 2014

An impossibly youthful 40 year-old Tempranillo, even surpassing the more evolved ’80 in that regard, with aniseed, coconut and beeswax in its current aromatic state. Less gamy and animal funky, yet persistent in earthy beats. The vegetal scents act as conduit to the light bulb shining brightly of circuitous flavours and resolved textures. Lingers in mouth feel, its layers of time slowly peeling back, revealing in length, a slide show of the wine’s life. With many year’s still ahead, this is a Tempranillo revelation and from one going back this far that gained no support from Graciano (because it was planted in 1979). Its apostle following instead comes by way of the white Viura. Pair with Chef Chris McDonald’s Foie Gras and Partridge Croquetas.  Tasted September 2014

Contino’s SV Graciano is the estate’s portent into the portal of ageability, beyond Tempranillo. Such formidable aromatics are on display, a result of low pH and high polyphenolic compounds. Has got something, but what it is, I can’t seem to place. It’s neither flora nor fauna, not rock, nor fruit. A combination of them all and a piercing streak of acidity leads to the expanse of a broad mouth texture. Sense perhaps black fruit, currants and berries. A toast, macerations, citrus even. This Graciano, the soul of Contino. Crème de cassis, eucalyptus, camphor, menthol and aniseed are all seemingly there, in colour, natural acidity, alive and dancing. Or are they? I looked at this Graciano, “from both sides now, from up and down, and still somehow,” it’s a challenge to see through the clouds. It’s so very large, exceeding the ministrations of other alterior SV examples, like that of Petit Verdot, Malbec or Cabernet Franc. In here it’s Graciano’s illusions I recall so I suppose I really don’t know Graciano at all. Imagine drinking this for 20 plus years.  Tasted September 2014

The flagship wine from Contino has an uncanny braised pork belly in spirited wines reduction nose, spiced with star anise. The aromas then go straight to the back of the brain, bypassing the frontal lobes and acute senses of nose and tongue. A wine that drives a stake directly into the nervous system, leaves one twitching and paralyzed. From arid, calcareous clay, the 34 year-old vines are just deadly, direct and make for some seriously demonstrative fruit. The mineral expression can’t be denied; this represents the most in the estate’s terroir driven directive. The blend is Tempranillo (80 per cent), Graciano (10) and Garnacha (10). New oak (100 per cent) is split between French (70), American (20) and various other European wood. A wine that will need a minimum five years to reach adulthood and perhaps 10 more to enlightenment. Though it is marked and baked by chalk and cake the mineral keeps it so ver real.  Tasted September 2014.