Emidio Pepe‘s granddaughter Chiara De Lulis Pepe says that in 5o years of winemaking nothing has changed. Nothing, save for a conglomerate-like expansion from 1.5 to 15 hectares of farming vines in Abruzzo. No seriously, do the math. Emidio Pepe remains and likely always will be a tiny, boutique, garagiste, artisan producer.

To say Emidio Pepe is unique and singular for Abruzzo and outwards into the natural winemaking diaspora is as gross an understatement as can be made. Consider the approach. Natural, healthy viticulture. No chemicals ever. Ever. Organic, biodynamic, only indigenous yeasts (more on that later), no fining or filtration. Red berries de-stemmed by hand. White grapes trod by foot. Fermentation in concrete. Bottling in early March and laid to rest. Then the bottles are decanted by hand, re-corked and released. The entire premise begins and ends with amazingly clean and pure fruit.

Pundits and critics will sit across a table and discuss. Point. “This is the essence of natural wine. No manipulation and zero handling.” Counterpoint. “There is no such thing. All wine is handled. All winemakers influence the outcome of their wines.” Point. “It’s all about the yeasts. They and their grapes are the heart and soul of natural wine.” Counterpoint. “To sell the wines, those yeasts and their grapes, once inside the bottle, must travel on planes, trains and automobiles. What is natural about that?”

The fact is Emidio Pepe‘s wines do not have to travel. They do not produce enough for that necessity but by heading out on tour they spread the gospel and bring a natural crush to the people. They are spokes-wines of history, health and possibility. They defy the naysayer’s argument because they are the godparents of natural wine.

If there is one single winemaker who defines natural, who lives, breathes and embodies the much maligned phrase “minimal intervention winemaking,” Emidio Pepe is the one. Not because of the techniques, practices and religious adherence to undomesticated viticulture, unadulterated and soulful viniculture. The reason Emidio Pepe is the benchmark and the region d’essere for natural wines to matter is because the wines are impossibly fantastic.

The vineyards are located 10 km from the Adriatic and 45 minutes from the Gran Sasso D’Italia mountains. The unique saddle and its clay-limestone soil encourage roots to burrow five to six metres downward, to a subterranean comfort zone, where the temperature is always constant.  Hand de-stemming is a tradition “but we believe it makes a superior product,” says Chiara. Concrete fermentation is done “to keep the integrity of the wine.”

For Emidio Pepe it begins and ends with the yeasts. Complexity and richness comes from “the family of yeasts that started the fermentation.” Chiara truly believes that yeasts will determine the flavours of the wine. “Selective yeasts make for simple wines,” she insists. “If you use them in different countries, 50-60 percent of the taste of those wines will be the same.” With indigenous yeasts, “the years will put a stamp on the personality of the wine.”

I sat down with Mark Cuff and Zinta Steprans of The Living Vine, John Szabo M.S., Will Predhomme and Peter Boyd to taste with Chiara De Lulis Pepe at Barque Smokehouse in March. Chiara brought some special wines to the table. Here are the notes. 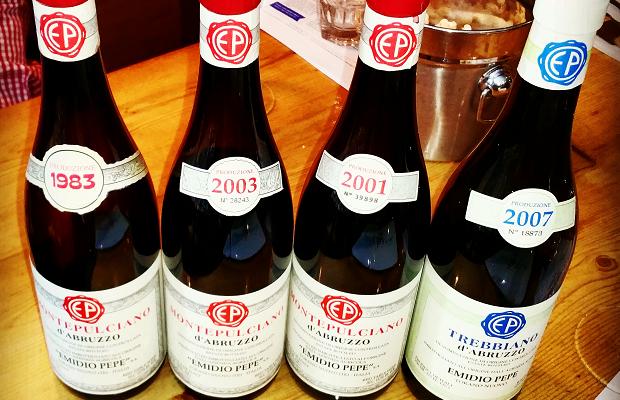 The line-up from Emidio Pepe

Skip straight past the naming and intimating of aromas and flavours. Here it is not the point. Trebbiano that is a product of having finished fermentation in bottle, with natural CO2, now virtually dissipated but persisting in echoes, to act as a natural preservative. The moniker natural does this little justice. The sweet sapidity and etching of acidity are so very grown-up, classically-styled, mature, precise. Trebbiano in which texture, above all else, stands out and firm. There is a dichotomous relationship, between viscosity and delicatezza. Natural respect, of a grace on a face, in twinkling wrinkles and gossamer flowers tucked impossibly into an aigrette of golden hair. In every facet to acting natural with a stupidly frank elegance to defy age, showing no signs of movement after eight years. The Robin Wright of white wine, expressive of tenderness but certainly not shy. Drink 2015-2025.  Tasted March 2015

At the teenage (in wine years) number 12 this is showing less evolution than expected, especially in consideration of the European year that was 2003. Another divaricating Abruzzo, with a dried fruit component that pullulates in a very hydrated way. From a scorching season where anxiety was felt by both the vines and their keepers. Possessive of a bricking that gives of the cracked earth, of dusty, ambivalent rocks and warm, pulpy air. Through the humid tones and with thanks to pergola trellising, balance prevails with close encounters in acidity of the rampant kind. Tannins rage as well, strong and bullish above the earthy notes and peppery berry bites. The old vines and sleight of winemaking hand are ensconced to this vision, void of faults and yet advancing from the frame. Needs just a few more years to find the median point on the chonometer. Drink 2018-2023.  Tasted March 2015

If the ’03 acts a bit like a hormonal, impulsive, testy, cavilling or petulant teenager, this 2001 is the adolescent. Full of boundless energy, willingly and excitably adventurous and ready to participate in the game. This from a terrific vintage with great aging potential, here Montepulciano manifests with gravity defying weight, like careful Nebbiolo or graceful Burgundy. Where this separates itself from other Grand Cru varietal infinity is in its yeast directive. Singular, remarkable, devoid in spice as if by wood. The structure is innate, indigenously calculated, developing in bottle, verbalizing flavour. Like a bone from the skin of the clay, piaculum by limestone, passed through and brought to light by the leavening catalyst. Drink 2020-2036.  Tasted March 2015

Give Emidio Pepe’s reds thirty odd years to develop and the impossible happens. To postulate in a moment’s assessment without remembering the pious tradition with which this was made would be a crime against Pepe, Abruzzo, the natural world and the wonders of the universe. With this much passage the spice cupboard that emits is wow times a thousand. Clove, cinnamon, cardamon, orange peel, galangal and like golden raisins that pass through quarries to become rubies. This wine is perfect. It has not broken down an iota. It requires no decanting. It defies logic, perception and time. There is no sediment, only energy. Speaks from the glass as if it were a child of destiny and mythology. The 1983 Emidio Pepe Montepulciano d’Abruzzo Riserva arrives from along the same road taken but its transmogrification proves that the result, with thanks again to the endemic froth, is different every time. Drink 2015-2029.  Tasted March 2015