A couple of years ago I tasted godello with Telmo Rodríguez at Archive Wine Bar in Toronto. Godello and godello under the tutelage of the micro-craft-small production Spanish wine magnate. Rodríguez combines “travel, evangelism and conceit, qualities the laser-focused, frank and facund winemaker possesses in spades.” Telmo returned to Toronto last Wednesday, this time to Momofuku’s Nikai. Godello (the grape) was not in tow, but Godello (the writer) was privy to taste some of the wildest field blends on the planet not produced by Marcel Deiss.

The place of origin is at the epicentre of Telmo’s recurrent dream, a place “lost in the mists of time.” Remelluri. The family farm to which a prodigal son returns, to restore winemaking traditions and bring back greatness. In Telmo’s world, exceptionality from place does not happen without first preaching a very specific gospel in nothing short of modern evangelical tones. Rodríguez doesn’t think much of corporations, commercialization, factories and cooperatives. He has little patience for large production, low-cost, cookie-cutter Rioja passing for traditional values. He is argumentative towards labelling and time spent in oak definitions. To him the Rioja categories of Crianza and Reserva are frustrating, mis-leading and so stupidly broad. He believes that most regional vintners put the most average juice into barrels, adhere to the criteria for aging and boom, release generic Rioja with no sense of place. Telmo is desperate to right this wrong.

Last time through Rodríguez lamented that “in Canada you have been drinking the worst Riojas, the undrinkable Riojas.” So he makes wines without incessantly resorting to the  suffocating slings and arrows of outrageous, appellative fortune; no Crianza, no Reserva, no Gran Reserva. At Remelluri he follows the designations albeit with experimental designs, even if some consider him to be doing so “illegally.” The field blend concept can’t be found anywhere in Rioja’s published guidelines or conceptual literature. That doesn’t seem to stop Telmo from doing his thing. At Remelluri, the vineyard was filled with a field blend, beyond tempranillo, planted to more than 5,000 plants per hectare. Telmo grafted from these plants to resuscitate the vineyard. Caring nothing about shunned (endemic) grape varieties densities considered too high he simply went about doing his radical work.

Rodríguez explains to a group of Toronto writers and sommeliers what it takes to make great wine in Spain. “Lets fight for those places. In Malaga, in Rioja, vineyards from the 7th century. Top vineyards. Amazing places.” He insists that the best wines from Rioja are not from 150 year-old wineries with big production. They are from places like Artadi’s Viña El Pisón, and the Rodríguez Las Beatas vineyard, small, specific and rich in historical significance. His list might also include R. López de Heredia Viña Tondonia’s Viña Cubillo, Viña Bosconia, and Viña Zaconia. Not to mention Tentenublo Wines Las Paredes and Contino’s Viña del Olivo. 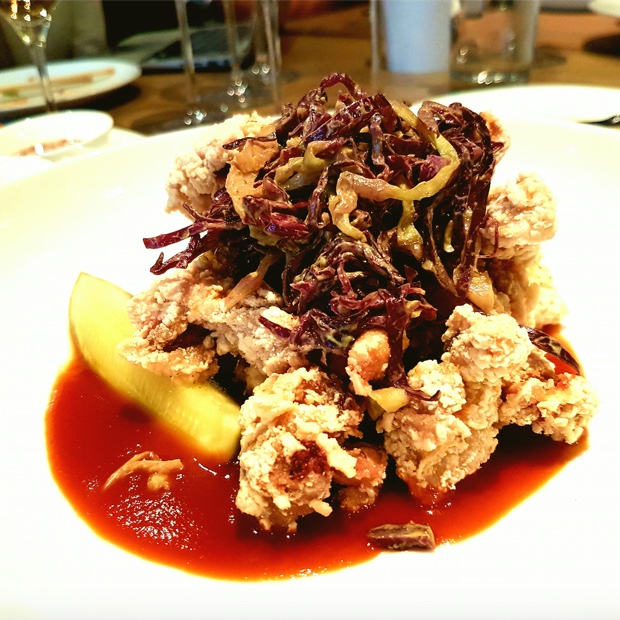 Telmo’s current focus and main goal is changing the hierarchy in Rioja, to re-establish beautiful places at the pinnacle of quality. “The quality of a wine is (derived from) the talent of the vineyard. The place is the talent, not the winemaker.” This is the crux of Telmo Rodríguez. This turns the winemaker-vineyard, artist-canvas concept on its head. There is no canvas. The vineyard as the star makes the winemaker a mere handler, a facilitator, a coach, a manager. The vineyard is the talent.

With thanks to Momofuku’s Beverage Director and Sommelier Steve Sousa and the Noble Estates braintrust of Craig de Blois, Richard Dittmar and too legit to quit Mark Coster, we sat down with four pours by Telmo Rodríguez and a stellar Nikai spread. Here are the notes.

Telmo Rodríguez returned in 2010 with the desperate urge to be a representative for Remelluri, the family property purchased by his parents in the 1960’s, with a lineage and history dating back to the 16th century. “They spent a good part of their life recuperating this estate,” explains Rodríguez. “It is a place never touched by herbicides or pesticides. How many vineyards in Europe can say that?” Remelluri is not just organic now, it has always been this way. The Blanco is a field blend of nine different varieties grown on poor limestone terraces of calcaire variegated into clay and quartenary sandstone/loam. The high altitude slopes and their cool-climate induction from the northwest are driven to drawing an immediate sense of layering, of sub-strata, strata, ground cover, dirt, vine and air. You can’t help but smell the white flowers and the palpability of dry extract. Picked over a long September to October period, fermented with wild abandon and left to smoulder away in a carnival of casks, the Blanco is an onion and its layers will peel away over a decade or more. An artisan white Rhône sensation warms the glass with the only southern aspect to waft from this wine. The rest is cooly northern and while the sense of origin is at the crux and the core, time will be needed to clarify the memories and to look ahead for future vintages articulated with greater experience. Drink 2016-2022.  Tasted September 2016 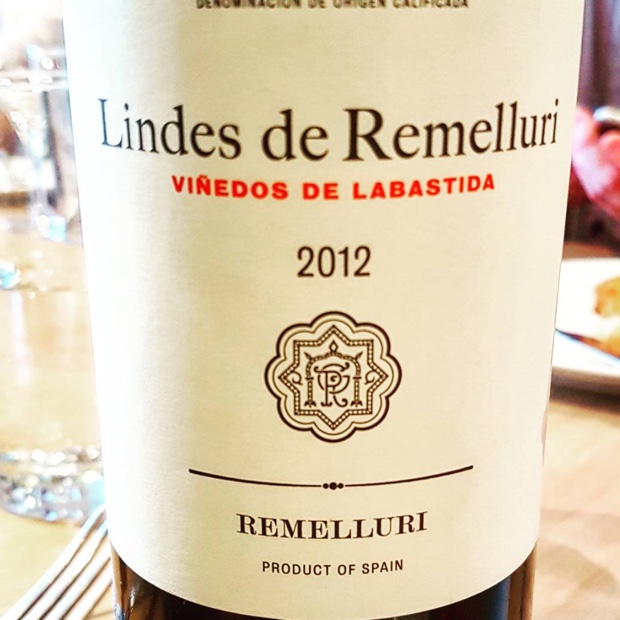 Granja Nuestra Señora de Remelluri is the oldest wine estate from Rioja, adjunct two villages, Labastida Alava and San Vicente de la Sonsierra from Rioja Alta. The significance of place was magnified in 2009 when the harvests were separated from each other and from the rest of the greater estate as a whole. The family lineages of farming and pressing those grapes is now expressed in two single-village, non-estate Lindes, meaning “on the boundaries or surroundings.” Tempranillo, garnacha, graciano and viura combine to tell the story of Labastida in Telmo Rodríguez’ entry-level Remelluri in which we don’t talk about oak. “We talk about place, viticulture, about what is important,” not how much time the wine aged in barrel. Rodríguez prizes these growers’ grapes and they are very proud of this project. A wine (60,000 bottles) that is ready to drink. A density of cure, just the slightest mustiness, a demurred, smoky, opaque mustiness, strawberries, cream and more natural yeasts and grapes than might be imagined getting together and making wine. It’s so very Telmo Rodríguez by mouthfeel so the vineyard is procured a time out in the sensory assessment and the winemaker steps in. But then culture, history and things that used to be creep back in on the gently sloping, ups, down and angled overs arrive at the beautiful finish. The length is not just long but lingering and very fresh. Drink 2016-2019.  Tasted September 2016

“My first fight was in Navarra, against cabernet sauvignon,” begins Telmo Rodríguez, el luchador por la libertad, the grape fighter. “My fight today is against trellising.” He continues.” Bush vines, field blends, these things are beautiful. The future of Spain is the past. For me Rioja is the villages, and the (field) blend of grapes. And a culture that has been lost.” And so The Remelluri Reserva, the original Granja Nuestra Señora de Remelluri estate wine has so quickly come to this. The most important fruit from three valleys from an essential Rioja vintage, massive, intense and instructive. All the culture, history and tradition of Telmo’s Rioja is locked tight in this time capsule vault of tempranillo, garnacha, graciano, viura and malvasia. From three valleys, Remelluri , Valdarremelluri and Villaescusa, from Labastida (Rioja Alvesa) and Rivas de Tereso belonging to San Vicente de La Sonsierra (Rioja Alta). These places are so important because of the families who have farmed these vineyards and the villages they are associated with. These lands are the rock stars and Rodríguez brings the Medoc-Bordeaux concept to purpose their Grand Vin potential. This 2010 Reserva is so young it took 20 minutes in the moment and two hours in the present to open the consideration assessment to even begin thinking about what it is. The depth of fruit is currently managed by volatility and tannin. That much is understood. Even acidity took a knee in the present, not in protest but in concession and abstinence. It will take its rightful place when needed, 10 plus years down the road. The fruit is massive, with freshness that will be preserved though it can’t yet speak. Red berries in a coal mine, tart unidentified stone fruits suspended in tree pod syrup animation. More later. Much later. Drink 2020-2032. Tasted September 2016

“What is Rioja?” asks Telmo Rodríguez. He notes that Lopez-Heredia still manages small vineyards, Grand Cru and Premier Cru plots, but most Rioja houses are industrial. Their wines age in barrels in 100-150 year old wineries but have no sense of place, of origins, of an amazing vineyard. “I want to be radical. I believe it (Rioja) can be one of the most beautiful places in the world but I told my brothers it needed to go in a very particular direction. My brothers agreed.” So costs went up 35 per cent. They bought no grapes. “If you want to work properly in Spain, you have to be a hero.” You have to work the most difficult vineyards, where production costs are five times that of Grand Vin Bordeaux but the price sells for 10 times less. And so Telmo Rodríguez produces this Gran Reserva, a wine that adheres to a Rioja systematic but does so from a blind-eye turned, high density field-blend planting of tempranillo, garnacha, graciano, muscatel, viura and malvasia. A field blend, unlike Bordeaux but a local village farmed gathering of the best fruit. The 2009 is showing no age but the difference between 2010 Reserva and 2009 Gran Reserva is night and day. This makes the ’10 seem fresh, alive, open, almost simple. Here the variegation is distilled down to laser focus, as if the varieties all become one and most people would simply say tempranillo, but who has ever tasted and been dealt such a tempranillo? This is oozing of a liqueur like no other, rich, viscous, natural and dry-extract sweet. An expression of the best microclimates and their vineyard kin. Wait another five years to allow it to remember and tell its tale. Drink 2022-2034.  Tasted September 2016