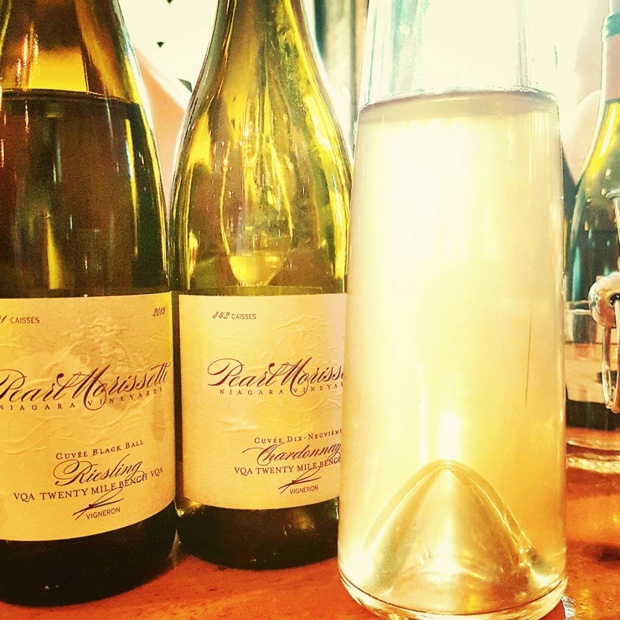 This much is clear to me and at least two friends of mine. Just because you think you’ve been there, done that and have tasted everything there is to taste you may need to pause and recalibrate the idea of assessment. Though your convictions are strong and your beliefs unwavering, you may not know all there is to know. If you feel one taste is enough to etch a life in stone then maybe its time to open up and allow a wine to blow your mind.

Related – The pearls of Morissette’s wisdom

I sat down at Barque Smokehouse last month with Pearl Morissette’s Svetlana Atcheva, John Szabo M.S. and Gerardo Diaz to taste some things new and to re-visit some of Francois Morissette’s most iconic if controversial wines. We travelled from the Blackball Society through evo-revo-chardonnay-volution to atypical, outside the box skin ferments. Such a journey is not suggested for the faint of heart or the stubborn of mind. And as much as tasting with the winemaker himself is the shit, with or without necessary shotgun enlightenment from man Friday Brent (anomyces) Rowland, who would not avail to taste these wines alone with Svet?

Related – Why it matters to taste wines again

In the house of Pearl Morissette there is no dogma and there are no demagogues. There is nature, DNA, terroir, “no premeditated outcome,” and the “obstinate pursuit of truth.” The deferential and antithetical ways of Pearl Morissette’s wines are well-known and documented. Even more reason to taste them again, and again. That they change is not what separates them from other wines, but how they change. Structure dictates that wine will both evolve and deteriorate with time in bottle. Francois Morissette’s wines don’t so much develop secondary and tertiary character this way but rather read like the lines on an EKG. The tenets of rhyme and reason do not apply. You can’t know them or think you have them figured out. Don’t even try, just go along for the ride. Seven wines were tasted with Svet that day. Here are the notes.

The only vintage to pass VQA (the subsequent 2014 failed), 100 per cent fermentation in foudres, full malo and not a moment of residual sugar, nada, niente, zero. It’s not oxidative nor does it offer up an electric shock as it may once have done. This milks texture, short of creamy and without oil. Has gained fruit if that is possible or moreso the fruit has now risen to the surface. The texture the catalyst has facilitated the rising. I really get Alsace, but the extended aging on the lees, without batonnage has caused an Alsace timing, post dumb, now rich, phenolic and out of hibernation. There has been no reabsorption of diffcicult properties and so the lushness of the vintage’s organoleptic fruit is all that remains. Well, not all but certainly the strongest aspect. Wonderful evolution. Drink 2016-2021. Tasted October 2016.

Let’s get something immediately out of the way. The wines of François Morissette are not meant to please curmudgeons, skeptics, contrarians or members of the wine media. This Riesling has no desire to kiss ass. This will not appeal to late harvest lovers, from Kabinett to Auslese. Is it ripe? Not quite. Is it different? Absolutely. This compares to almost nothing. Like a Champagne ginger, lime and bronze filings cocktail, the Blackball ’13 is so very developed and despite the colour, is a hyperbole in primary existentialism. That it has essentially no residual sugar and an achieved 11.5 per cent alcohol is a complication only the clinical doyenne has the answers to. Riesling in between dreams, “never knowing shocking but we’re nothing.” The Blackball has struck, is not yet stricken and will offer remote pleasure for another six months. Then it will deconstruct, dissolve and devolve into darkness and funk. Five years later it may emerge like a phoenix, jack up like a Rangen Riesling, into the ethereal. Will it happen. I couldn’t possibly tell you. We may never know. But I can say that then, and only then, will it truly tell its story. Tasted March 2015

A blend of 50 per cent chardonnay from the high density home vineyard and 50 per cent from the Lincoln Lakeshore Redfoot (Kocsis) Vineyard aged in demi-muids neutral oak. And yet I’m surprised, even stupefied by the guts and glory of wood on the nose, followed by the blanched nut, creamy palate. No new oak. None. From a Pearl Morissette category of wines not 100 per cent blue-blood pure and for wines that are purposed and destined to texture. This is more recognizeable as chardonnay than the Dix-Neuvième in that it is approached with less risk, hyperbole and umami. The aromas and flavours are supermarket fruit diagnostic, specific and open to put a finger on. I could actually sniff out grapefruit, apple and banana. I can sense a drop or two of honey. I can taste almonds and cashews. It all ends up in a recipe, albeit of the Francois Morissette variety. Think of this as the school of Pearl Morissette. Antithetical and impossible. Consumer-friendly. Really friendly. Welcome to the invitation of the diversification of Pearl Morissette. Drink 2016-2019.  Tasted October 2016

The unidentified one, stoic, umami-laden, dangerous, in and out of reachable zones. Right now it’s hiding, slumbering, developing another gear and level of complexity. That will be a wine in the future without the aid of new oak (there was only 10 per cent in this stellar vintage) but will come about as a result of idealistic organoleptics.  Last tasted October 2016

The greatest surprise is a skeptic’s dream, that is, no surprise. The vintage was a gift for chardonnay as we all know and so Francois Morissette does what a wise winemaker does. He lets the fruit from such conditioning speak on its own behalf. The less is more approach allows his fruit to do more than most, to condense into pure elixir of terroir, to inflate with airy, philosophical heir and to exhale a perfume so very, very Cuvée Dix-Neuvieme. Like marzipan but more umami and like stone fruit but crossed with the orchard. The palate and the texture speak of resolution after the revolution and the level of calm post chaos is quietly dramatic. Hypnotizing clarity is what it is. Drink 2017-2027.  Tasted June 2016

Has this ’12 come around, come back to the land of high living, where the Jura meets the edge of life, polarizing, unidentified, and here me out, deal with it. Great compressed citrus, hard to opine curd and gelling ministrations. A machine of churning creamery and tense orchard fruit. A bit of buzzing, pulsing movement now, into the next honey territory. Wild sauvage. Amazing. Score increased as a result.  Last tasted October 2016

The style has changed for this Chardonnay though it is now more in line with other Pearl Morissette varietal wines. The oxidative, natural bent has increased with anti-furor, succour and sublimity of a sordid sort. It remains to be seen what will happen because 10 years will be needed to fully denote the PM evolution, but what remains from the larder is true blue lemon that will turn, curdle and hold honey tight in five to six years time. Could be earlier considering the vintage. The flint and natural yeast are big on the nose while the palate is softer than most years. More like ’10, nothing like ’09 and yet full bodied to the maximum density it can be. So much flavour and yet at present the acidity plays anything but a vibrant tune. Story to unfold. Drink 2017-2022.  Tasted June 2015

The Cuvée Blu is not about colour, it’s about working with the skins, from fully de-stemmed 50 per cent viognier and 50 riesling. A five week introduction for those partaking mate skins, pressed and racked straight away and aged in qvevri. Here as a Pearl Morissette engagement, highly phenolic, floral and terpenic. The aromatics are pretty and muddy, the texture fleshing as the star, acidity fully intact in surround of tang, compression and tactility. Very long linger of lemon curd, wax above the honey pot and a chew of the fermenting vessel itself, as if concrete wed adobe. An earthiness hard to define. Quite a bit of chalk, lime and thyme. Wild thyme and honey. Volatile acidity? No way. Simple wine expression in the amber-orange-natural compendium? Yes. No need for labels or sterotypes. Outside the box, round and sound, the fun found on the palate. 1100 bottles made. Drink 2017-2021.  Tasted October 2016

Still reductive from a whole cluster fermentation in concrete followed by neutral demi-muid barrels. Pulsing and vibrating, firm and vibrant, with unreal ripe cherries, a consistency recognized and lauded, the wine having developed a second cru gear. The climb to another phenolic level is a pretty result of less funky fermentation and reduction lingering without air, on the nose, not the palate. The next go to gamay outpost. Must see gamay TV. There will be no ’15 but will return in ’16.  Tasted October 2016

From my previous note:

In December of 2014 I counted the ’13 CMU Gamay as one of my mind-blowing wines of the year. Once again we are witness to the authentic, raw and natural impossibility of the wine, from 100 per cent whole clusters sent to cement fermenters. The hue is just impossible, the wine sulphur-free. That ’13 Gamay did not last. I tasted again this winter and it failed me. It may return. This ’14 will never leave. It is natural to the 14th degree and yet its rich, smokey chocolate centre and structure of pure physical stature will not let it slide, into a dumb phase or oblivion. This Gamay will strut. It already does. Drink 2015-2020.  Tasted June 2015

In a word, striking, not for subtlety but out of sheer natural complexion. A concerted effort is needed to define the antithetical, whole cluster fermentation juxtaposed with Twenty Mile Bench varietal ripeness. Such an intense cabernet franc with a palpable sense of the earth from out of a 60 per cent (up 20 points from 2012) natural fermentation (in concrete open top fermenters plus 10 per cent new wood aging). The ripeness of fruit in cohorts is simply all in. No holes, ommissions or emissions. Very big right now at 12.2 per cent alcohol, of impossibilities and ambiguities, understatements and over necessitous demands. Specific and reeling. Cooler than most peers, spiced and linear. Taut and bracing, grippy, fine-grained, with tributary branches and brambles. Amazing. Needs three years. Drink 2019-2027.  Tasted October 2016