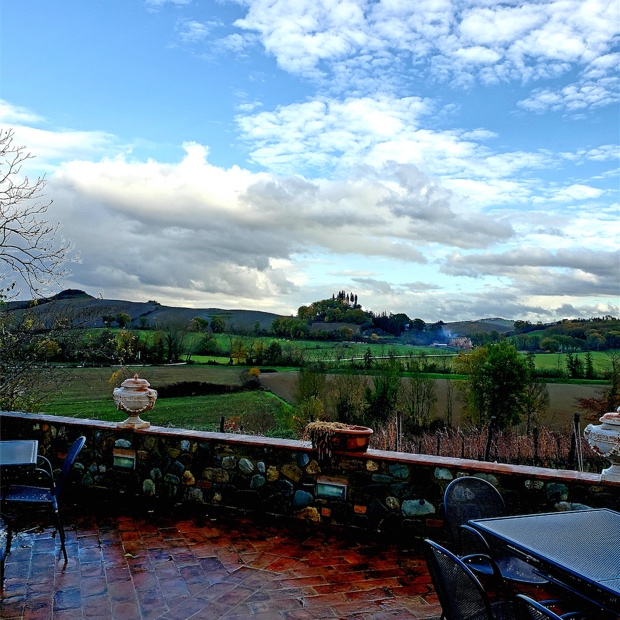 Gioia e Filippo Cresti have embarked upon a new Castelnuovo Berardenga project, moving towards a cru system to define their sangiovese and their Chianti Classico. Truly, entirely and for essential reason. Montaperto, Fontalpino, Dofana. This organic vineyard is a micro-terroir, an idyllic knoll in the territory that just seems suspended inside an invisible demure, like the estate is hidden safe and secure inside a bubble. Time stops and stands still in this place and it’s hard to describe. What is not difficult to render is the passion and the confidence of Gioia and Filippo, two Chianti Classico souls who simply inuit what they must do. 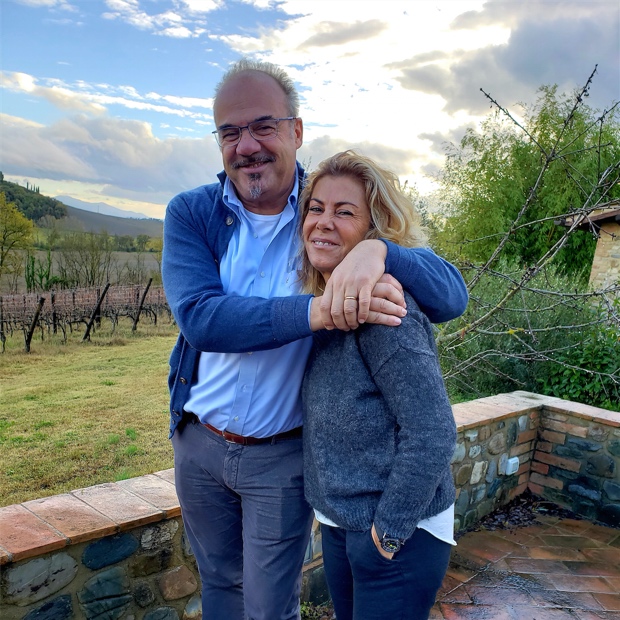 Carpineta Fontalpino, due east from Siena, separated by the river Arbia. Carpineta, from “Hornbeams,” hardwood trees in the flowering plant genus Carpinus in the birch family Betulaceae. Fontalpino, of the pine, Montaperti. At Carpineta Fontalpino the battlefield was the theatre of the mythical battle between Siena and Florence on September 4, 1260, where the Sienese who, with pride, still today recall the victory over his rival Florence. History also shows that it was remembered by Dante Alighieri in the Divine Comedy. “The agony and the great slaughter that made the Arbia colored in red.” 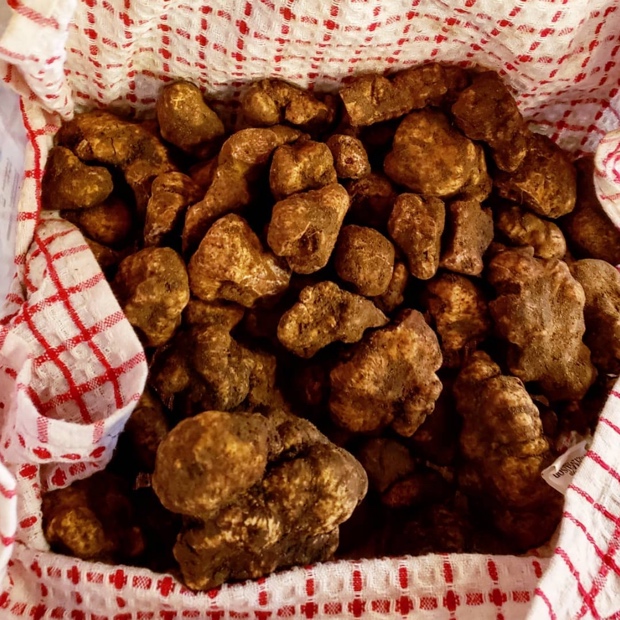 We had a quick, efficient and epiphanic tasting at Fontalpino. In the end we understood the focus, clarity and the direction, into cru, because it has to be. More and more you will begin to see this frazioni within frazioni in the territory, of menzione geografica, to mention and to exult the places within the places within the larger framework of the region.

The cru designations are not so much a replacing of the Annata, Riserva and Gran Selezione hierarchy as much as they are a reinventing or a restructuring of the pyramid. Or perhaps a deconstructing. In the end the wines speak for themselves and these are the seven tasted with an important emphasis on not just comparing but also contrasting 2015 and 2016.

From Castelnuovo Berardenga in the hands of Filippo and Gioia Cresti. Their new direction is moving towards a cru project, truly and entirely. The Fontalpino Annata is sangiovese of the broadest expression and it’s a very fully rendered red fruit. So much promised, especially from 2015 and so much delivered. The wisdom and the understanding are wholly realized, recognized and welcomed. Sets us up for the cru 15s and 16s to come. Drink 2018-2020. Tasted November 2018  carpinetafontalpino  gioiacresti  filippocresti  grape_brands  #CarpinetaFontalpino GRAPEBRANDS  @CarpinetaFontalpino  Gioia Cresti  Filippo Cresti

This Fontalpino is the best of both worlds Chianti Classico for the estate and here it comes smiling along with the biggest vintage breath of sigh, calm and release. It’s a bigger wine than ’15, felt in part that way because of its youth. Still the generosity and the confidence but certainly the wisdom. This broad estate expression is meant to be consumed early and as far as looking for early drinking Annata pleasure is concerned, Gioia and Filippo Cresti’s 2016 is one to make as much use of as is humanly possible. Drink 2019-2021. Tasted November 2018

The cru that is Montaperto is higher in elevation and marked by a fit of pure Galestro on the edgy limestone side of soil. And so it’s a lightning red fruit red, of a style that is both place and grace. There is a certain way of it being so effusive and in its own way elegant. The finessed one of the three cru in an obvious display of itself. Pure, pretty and delicate. Drink 2018-2021.  Tasted November 2018

In Montaperto the finessed one you will note with great immediacy that 2016 is a perfectly ripened vintage, both for sweet fruit and more so from specialized cru-heady phenolics. All might be for naught were it not accompanied by the finest up reach in acidity. Here sangiovese is preached with utmost structure and ability. The accomplishment attains a level of clarity and transparency despite or perhaps in spite of the tactile habituation and architectural conditioning in its bones. Conclusion? Just gorgeous sangiovese juice of pure limestone expression. Drink 2020-2029.  Tasted November 2018 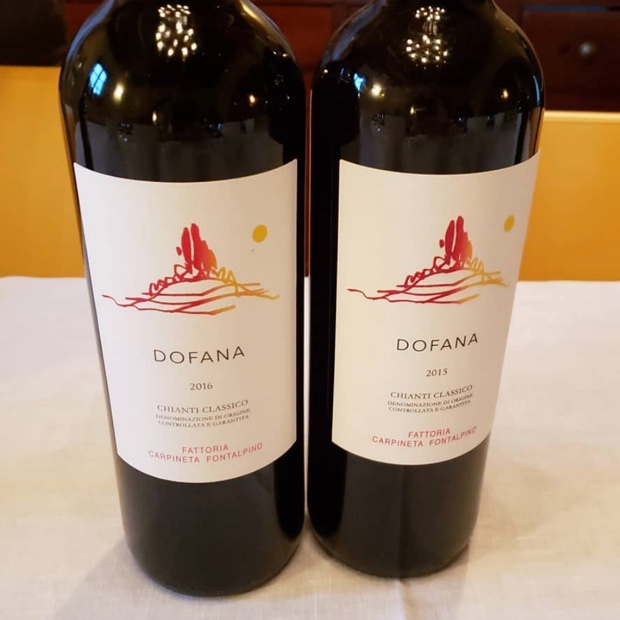 Comes from a combination of many soils; limestone, clay and tufo. There is a prevalence of all the Chianti Classico stones; Galestro and Alberese but it’s just the greatest confluence that makes for their grippiest sangiovese. And that said it’s magically delicate. The red berries darken but only because the framework of organized Castelnuovo design insists on taking the fruit deeper, into the fabric of the earth and it speaks to one word; cru. Such a structured sangiovese. Drink 2019-2026.  Tasted November 2018

The variegation of soils; sand, clay, stone and tuff will have great effect on any sangiovese but see what delivers when you pull grapes from the Dofana cru and out of 2016. It’s a confluence of everything that matters, for tradition, land and the people who make the wine. The fruit is here right from the start and although the tannins are strong and sharp they are so refined and come equipped with fruit made available from the very beginning. Really direct sangiovese. Drink 2021-2028.  Tasted November 2018

What “do they give” from this one-third each combination of sangiovese, cabernet sauvignon and merlot? As compared to the DOCG sangiovese there is more height, aerified nature and just plain attitude to the IGT. Sources are various vineyards around the estate which sit on the border between Chianti Classico and the Chianti Colli Senesi. In subsequent vintages the sangiovese will be dropped and replaced by petit verdot. Partly because it’s too important to take it away from the cru CCs but also because this IGT is and needs to be separated. It’s just different, darker, more of a liqueur, with less finesse and more ferric depth. The answer? “”I give and give.” Drink 2018-2020.  Tasted November 2018