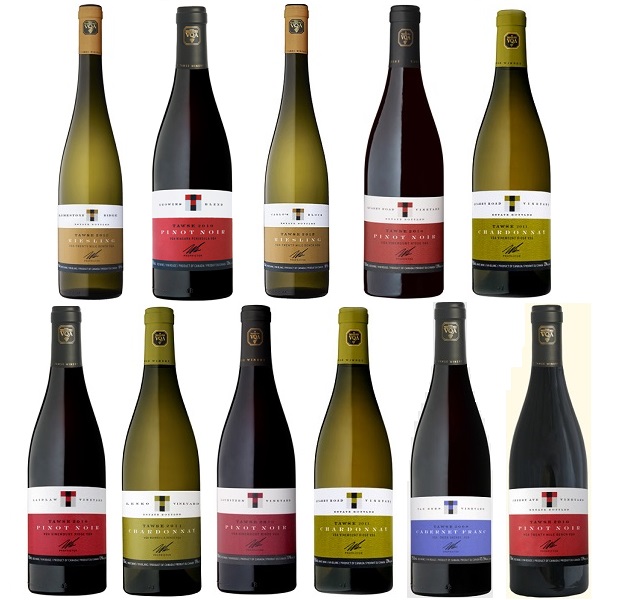 Tawse winery is growing and gaining weight but just like its vineyards, the pursuit is wagered in natural and holistic ways. The Tawse effect distills a biodynamic appropinquation, in the acquisition of new vineyards, in the gathering of tonnage from Niagara and Prince Edward County growers, in the farming and production of estate grapes. I have been making regular visits to the Vineland, Ontario winery for the past three years. The natural, self-sustaining processes remain open, obvious, front and centre.

Related – Every barrel tells a story

Chardonnay fruit might travel across the 401 and down the QEW from South Bay at Huff Estates. It may skip across King Street and skirt up Cherry Avenue from Daniel Lenko. It may come to early fruition from young Tintern Vineyard Pinot Noir vines out of the Vinemount Ridge. Whatever the source, the approach is simple. Let winemaker Paul Pender get his mind and his mitts on that fruit. Then let him work his magic. Seek biodiversity, soil fertility, crop nutrition, and chemical-free pest, weed and disease control. Fight the good fight against the harshest of winters with vines of deeper roots and stronger canes. 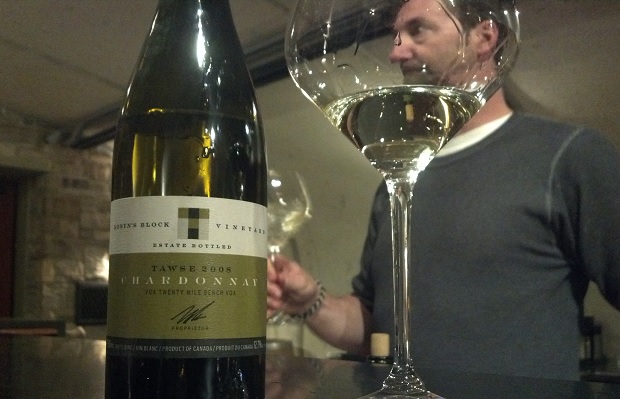 The Tawse portfolio may now seem hyper-varied and even massive. Nothing and everything has changed. The lots remain small to manageable, the choice of varieties consistent and the wines, ever increasingly impressive. Whatever faults, idiosyncrasies or misunderstood characteristics there may have been in some older wines, they are no more. There are now purer and more vibrant aromas and flavours. Wait until you get a load of 2012 and 2013. Paul Pender’s acumen and winemaking professionalism has reached a whole new level of Rock ‘N Roll.

Paul Pender is a big picture guy. He is the Niagara renaissance man; songwriter, vocalist, lead guitar, producer and engineer. He’s Cuddy, Cripps and Chris Shreenan-Dyck rolled into one. Pender’s handling of growing, picking, fermenting, aging and bottling is nothing short of impossible and yet he does it with a conceit of ease. At last count I noted three Sparklings, three Rosé, two Dessert Wines, six Chardonnay, five Riesling, two Gewurztraminer, one Pinot Gris, one Sauvignon Blanc, six Pinot Noir, three Cabernet Franc, one Cabernet Sauvignon, one Merlot, one Cabernet-Merlot, one Meritage and one Gamay. Thirty-seven wines. One goal. Getting better all the time.

The winter and early spring of 2014 has found me cozying up to the wines of Tawse. On a frigid January evening on my way to Ice Wine Fest I spent time with winemaker Pender in the cellars, speed investigating my way through the barrels of Chardonnay and Pinot Noir. Not to mention Cabernet Franc, Merlot, Cabernet Sauvignon, Riesling and even Sauvignon Blanc. I’ve tasted Tawse with Daniel Lafleur at Somewhereness, with Vinifera’s Daniel Beiles at Barque Smokehouse and at the winery’s portfolio tasting at The Spoke Club. 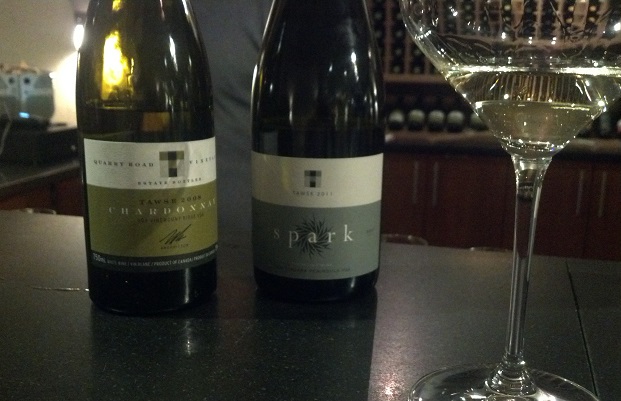 Here are notes on 14 Tawse wines tasted from bottle in April and May 2014.

From the newest estate vineyard, the single-vineyard Limestone Ridge exteriorizes its name in a rubric of pressed rock, struck flint and chalky density. Paul Pender has coaxed a multiplicity of linear character, with major notes of lime zest and juice, persistent from start to finish. A mid-pause of oozing, residual sinensis is the determinant towards the wine’s matrix of longevity. A longer, leaner, meaner and mightier Riesling charged by a different sort of power. Kinetic, frenetic and electric. Tasted twice, April and May 2014

This introductory release is a blend of 65 per cent Chardonnay, 22 Pinot Noir and 13 Pinot Gris. A linear, straight shooting star, a sparkler that is so “surprising it goes so fast.” Bright, flashy, attention grabbing and fleeting. These are bubbles with a plan, anything but bad company and quite remarkable for the price. Lemon, lime and ginger strum in wound tension and the wine gets on top very quickly, then disappears into the starry night. Exhilarating while it lasts.  Tasted April 2014

From fruit (east of Beamsville) next to Puddicombe, which is essentially Winona on the eastern edge of the Niagara Escarpment appellation. Some parcels of disparate Niagara fruit joins this inaugural effort, a rich, viscous and warming Chardonnay. Layered and expertly balanced, it carries the best of both the Quarry (mineral) and Robyn (approachable) worlds. The spicy accent gives the blend its singular personality.  Tasted May 2014

Though it’s a blend of several sites, this Tawse Pinot stands alone and of itself as a grower; it grows on you after multiple tastings. The first go ’round seems simple, vintage warm and tight. Taste again and the sappy wood seeps mineral, the phenolic red cherry ripeness turns black and the tempering is led by a sweet earth kind. Earth that smoulders in a rising Zeppelin kept afloat by tobacco and the swirling spores of pungent mushroom. Pinot Noir truth and value from a Niagara house of the holy kind. “You know-whoa, that’s right.” Tasted twice, April and May 2014

Boasts classic flint and citrus Twenty Mile Bench aromatics. In 2012 it’s also lush, rich and so very pear and longan fruity. Whorls like a wind turbine blowing the polar aspects against each other’s walls. Forms a bridge and meets the twain, from atomic to tropic. High tang and flavour. Big yet classic Riesling.  Tasted May 2014

This is the second Pinot Noir made from the Vinemount Ridge vineyard, a place where the rock can’t help but tyrannize the fruit. The 2010 Quarry Road gains positive proportion in that it is painted and coated by the ripeness of the vintage. Of a tougher mind and shell than the other Tawse Pinots, a bird on the wire just trying to be free. Not as easy to approach or love, it might plead “if I, if I have been unkind, I hope that you can just let it go by.” Sings in a wise, raspy and rusty way, despite the youthfulness of the vineyard, but it shines. So in the end “hey, why not ask for more?” Tasted May 2014

At this stage the 2008 Quarry Road is fully resolved, integrated and as soft as full malolactic Chardonnay can be. The unmistakable note of creamed corn lingers longer, as does the look on the winemaker’s face, but air brings it around. Returns to a fresh beginning, “from a year that might not have turned into anything,” admits Paul Pender. Now standing firm, the wine benefits six years on from clean, rotless fruit and pure, angular acidity, holding steady to the admirable finish. Tasted April 2014

The pinpoint accuracy and gemstone capture of the Quarry is exaggerated in ’11, amplified and fully plugged in. From my earlier, October 2013 note: “Carries that classic Paul Pender perfume; rocks and stones, flaxen, refulgent toast and the verdure Vinemount terroir. A free flying, linear, atmospheric smear of thermal fortitude and backbone. A polemic Bowie Chardonnay to make you believe “the strangest things, loving the alien.” From my earlier March 2012 (barrel tasting) note: “Resides on the mineral, slate and lime side of the tracks. The calcareous quality imparted by its eponymous SV terroir makes it the antithesis of David. Creamy, 24-karat fruit.” Last tasted May 2014

From the Vinemount Ridge sub-Appellation of the Niagara Peninsula, the Tawse Laidlaw Pinot 2010 is the least gregarious, the quiet sibling, the most feminine, the sleeper. Laidlaw may play hardest to get and is the least obvious when considering perfume but her palate is the sweetest of the line-up. Strawberry macerates sous-bois for an authentic Burgundian experience. Patient, focused and structured. Tasted May 2014

The speed and the steel have slowed to yellow caution and the now honey-toned flesh has added more weight. There’s just something about Daniel Lenko at this juncture. From my earlier (tasted three times) July 2013 note: “From wiser men who’ve been through it all” is the kind of one-off we should all wish to re-visit in 10 years time. The study: Daniel Lenko’s fruit in the hands of winemaker Paul Pender out of a most confounding vintage. That 2011 in terms of Ontario Chardonnay strikes and speaks to me in tongues is no secret, so the Tawse treatment fascinates in ways to make me giddy. Tension and elasticity are present here in super-hyper Beamsville Bench concentration. Apples pile upon apples, in magnetic purée and layered maceration. A full-on body attack and phenolic structure will see this Lenko to a future (five to seven years) in grace and gorgeous line. A Chardonnay to “scheme the schemes, face the face.” Last tasted April 2014

A year in bottle has elevated the perfume, concentrated the cherry flavour and placed a crown on its regal head. The sweet tannic quotient resonates from its very core. Showing great at this time. From my earlier April 2013 note: “From the Vinemount Ridge is dry and cut with spice, a favourite for winemaker Paul Pender. The sour acidity from fruit such as cranberry and pomegranate are here in deep, concentrated and naturally sweet tones. Niagara limestone casts a Burgundy mineral shadow and the wine is iron tough yet silky due to the warmth of the vintage.” Last tasted April and May 2014

The 2008 Robyn’s Block neither matches the roundness nor the tempering acidity of the Quarry but what it lacks in those areas it makes up for in critical mass and balance. The creamed corn effect is here, as are apples in ciderish activity, from a wine that “was on a starved diet,” says Paul Pender. Though currently a bit reductive and funky, it’s not gun-flinty reduction, like the “smell of a battlefield on the morning after a civil war fight.” Swirling brings out cane sugar to replace the creamy silage and the rest is history. Calm, quiet and approachable inactivity. Tasted April 2014

What a wonderful vintage for Creek Shores Cabernet Franc and what a difference a year makes. Ripeness, development, rich layering, absence of chalk. Extreme elegance and void of an overbearing currant and bell pepper greening. Tannins are toned and fit. From my earlier, April 2013 note: “From the Creek Shores Appellation is proof that a well-rounded grape has no point. The Van Bers is winemaker Paul Pender’s purlieu, edgy, outlying, unconcerned with the norm or the banal. Makes full use of a cool vintage with heart-stopping acidity and eye-popping verve but not without delivering Soul, in the form of flowers and a fruit basket to your doorstep. “It’s like thunder and lightning.” Capers, camphor and a knock on wood add R & B complexity.” Last tasted May 2014

From two acres of Pinot Noir planted in 2005 known as David’s Block within the Cherry Road Vineyard. A clash of hot and dry weather encouraged the young fruit to find ripeness, in flesh and in tannin. There is an elegance about this Cherry, in part no doubt to wine technique in acumen. The Paul Pender perfume, a combative interplay between cherries and earth, is here. “The in crowd say it’s cool” but it has yet to Rock the Casbah. Cherry 2010 is only offering a glimpse of greatness, so hold out for what will surely develop when the vines reach their next level of maturity. Tasted April 2014