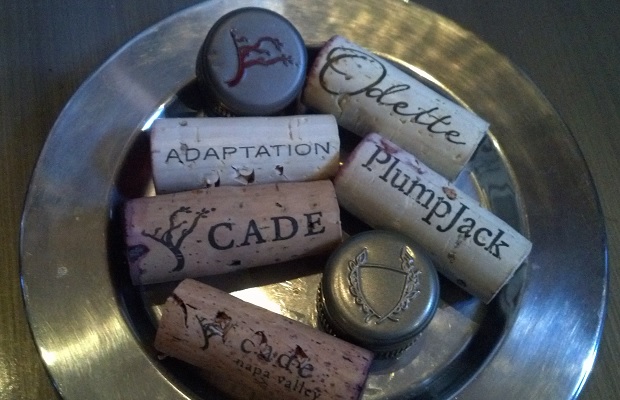 The closures of Plumpjack

The wineries of Plumpjack, Cade and Odette bring three distinct Napa Valley growing areas together; Oakville, Howell Mountain and the Silverado Trail. When the unified program cascades into town it has a tremendous evangelical effect, proselytizing many. Though well-known and regarded California grape varieties like Chardonnay, Merlot and Syrah are part of the PCO output, that stalwart varietal behemoth called Cabernet Sauvignon stands alone. For this group of Napa wineries, life is a Cabernet.

Plumpjack is the heart and soul of the operation. In 2015 the Oakville outfit will celebrate 20 years of collocating wines from plots of Napa significance. In a universe steeped in the paradox of what was Bordeaux and is now California, Plumpjack makes work in fractive reflection of a vineyard’s take on that paradox. The estate’s 42 acres are nestled between the foothills of the Vaca mountain range and the Napa River flood zone. Cade works with Howell Mountain’s fog on 54 acres above the valley. The extremes of temperature and moisture do for Cade like the Petaluma Gap ushers to Sonoma but with more consistency from vintage to vintage. On Howell Mountain, balance is everything. Odette is the new, wunderkind venture, with Jeff Owens as winemaker, spiraled and sprawled across 54 acres against the Stag’s Leap Palisades knuckled down with all five Bordeaux varietals.

The Napa triumvirate of Plumpjack, Cade and Odette is represented in Ontario by The Vine Agency, a Toronto based wine bureau of authority, rebelliously in focus through the eyes of Rob Groh. Groh is an indefatigable defender of honest juice with a penchant for estate-grown, family procured, characterful wines. He and Derek Kranenborg brought General Manager John Conover to the Distillery District’s Cluny Bistro last month for an intense fixation, mostly and righteously on Cabernet Sauvignon.

A full on crème filling feel is awash in tropical nuance. At once young and tender like hearts of palm and then again  like roasted cart nuts and a bonfire on the beach, eventually cooled by palm fronds and prevailing winds. Nothing would suit this better than a suckling pig and a mess of lobsters. Seamless in texture all the way through, finishing with dessert cream and buttery pastry.  Tasted October 2014

Part Carneros and part St. Helena with the former trumping the latter as this is much cooler and linear, with apples in stereo acidity, cogitated in a self-professed “alternative California style.” Definition: zero malolactic fermentation. This is the second such recent animal (along with Gundlach-Bundschu) though the first Napa to do Ontario in such dissident manner. Feathers a tickle up the olfactory passage and bounds in restless bounce within the walls of the jumpy castle. Not quite indelicate but high-toned at the present time. Such a nimbly carved ride in wild yeast serried within an expressive ferment, with a Fernet note and a request for patience. Really long finish.  Tasted October 2014

As a second wine to Plumpjack, Adaptation offers a similar, if less complex mental state to the dean Cabernet. The stress-free vintage gives very ripe, lush and excelling fruit in the throes of oak and circumstance. Tones are bright, aromas defined, with patent black cherry and Cassis. As noted, oak is not unbeknownst but it infuses the fruit with just a little chalk and from a very fine grain. Somewhat savoury sweet currants bring delicate flavour, along with a mild cure in its marbled flesh. Turns devilish with spice box, a drag on a hand rolled cigar and a slice of rye toast, caramelized on the edges. Will adapt to protein, with banter and good cheer.  Tasted October 2014

Though prepped by notions of a cooler and later ripening vintage, there is even more savoury, tobacco and cool clime (altitude) aromatics than might have been imagined. This Cade is so very bright in a cherry-plum-pomegranate continuum yet in contrast to a (negatively impacting) sweet-sour-tang drupe. Tends to angles more akin to Tuscan summer savour, like lavender, rosemary, sage, and vanilla. The overall impression to palate is that of a chew of the toffee that might be made by the aromatic combination, or a pull of syrupy tea. In the end there is nothing simple about this thoughtfully crafted Cade.  Tasted October 2014

Fruit from the Oak Knoll Vineyard etched as ripe a Napa Merlot that can or would ever want to be. That it teeters on the scarp, laughing at the greens, partying with the reds and joking with the blacks, this Merlot is quite righteous in quintessential necessity. It screams fruit, picked just at THE moment. At 15.2 per cent the expectation would be intensity, like a moth with a fatal attraction to a book fire but it manages the sun and ripeness with ease. Drink this now, if you can afford it and wait five more to see where it goes.  Tasted October 2014

There’s a dusty aromatic feel here with tar, charcoal and the ardor of wet stones roasting in a hot room. The barrel is still speaking this many years on, the fruit lurking, the wood caressing but with a strong and outstretched hand. Dark berries come out of the waft in full play and when tasted, with tobacco and many candied flowers. Very Paulliac. Full warmth, with a texture of cream, vanilla, layer cake and nuzzled by sweet tannins. In spite of the compass it is approachable (stupidly so) and still worthy of a lazy petering for 10 years forward.  Tasted October 2014

Less dust but that’s splitting hairs. When making comparisons without the necessity of blind pours the minute distinctions are conjured by plotting and conjecture. Same wood up front, same sweet fruit behind. The texture of cream filled layer cake and some spice with tobacco on the back palate. This is extreme modernity incarnate. It seeks love and love it receives.  Tasted October 2014

Just an incredible crack of aromatics mark what seems like 10-plus minutes of thunder Plumpjack; Spring wildflowers, black raspberry, roasted game and crushed steen as if from Gironde-banked, well-drained gravel, sandy stone and clay soils. Ripe, seamless and nonrigid. “I dare you to smell bell pepper in this,” chides General Manager John Conover. Though 2011 caused some Napa concern, Plumpjack will have had none of its woes and whimpers. The Oakville Cabernet “does this thing she calls the jump back Jack, she’s got the heart of a ballerina.” Dried and fresh herbs define its vintage-related nuance and their herbal presence, etched in balance with well-thought out barrels means “my heart’s wood, she’s a carpenter, she’s an angel in the night, what she does is alright.” Really approachable now, though it will go very long and deep.  Tasted October 2014  @PlumpJackWinery

As rich and hedonistic as is the animal of Oakville ‘07, this 2010 is the bomb. Pure, clear mountain fruit, unencumbered, free, card-carrying member. Spokesperson and player, cool and collected, conceited, sure, gay, straightforward, then warm and lush again. This has layers and layers of fruit, waves of feigned sweetness, grape tannins interwoven in chains, molecules tumbling over one another. Heartfelt expression creates a massive Howell Mountain impression.  Tasted October 2014

From a second bottle tasted from screwcap: Just as the comparison of ’07’s revealed, the similarities are just what the wine expects you to find. Large and full of fruit with sweet, integrated and ingratiating tannins. There is actually another level of open window brightness in the Stelvin, but that same (cork closure) spice and high altitude conceit takes the fruit on honeymoon and sexes the hell out of it.  Tasted October 2014

Here storms in the inaugural vintage, personally carried, delivered and poured by John Conover. The level of purity trumps the rest. The clarity and chaste structure are defined in lines of no blur and no confusion. Full of brisk, red-blooded, indelible ink of a cabaret magician’s brew. Built on axon terminals of mnemonic neurons. Sweetest dewy smells, unreal fruit, remarkable wildflowers – this reminds me of an Ornellaia, an ’01 or and ’11. Essence of just picked berries – strawberry and blackberry, leaves in an instant and an ooze of freshness. Knots of tannin will take 15-20 years to untangle but the fruit is up to every moment of engagement. “It’s only a (Cabernet), old chum. And I love a (Cabernet).”