While rambling in Vinho Verde last week, I was taken by overnight precipitation that would carpet the mountains above 400m with white stuff. It was magical to wake up in Amarante, Ponte da Barca and Melgaço to see the late March greenery contrasted with a jacket of celestial deliquescence. Then I returned to Toronto. Early April snow just didn’t quite have the same heart-stirring effect.

In VV the reputation is for producing crisp, light and refreshing wines. This from a place where it rains a lot. Nearly all the time. The land is so green you can see the fairies and pixies scurrying about. The place is such a verdant paradise it feels as though life springs from every tuft, tuffet and bit of life-affirming turf. With so much damp, wet and soggy abound you might think that hearty reds are both essential and necessary. To the contrary, it is Alvarinho, Loureiro, Arinto and Avesso that speak the most sincere truths. White wines rule.

The VINTAGES April 16th release is the launching pad for whites and my seven picks will lock in to every wheelhouse wished for, from $16 to $30 and from grape varieties both recognizable and habituated outside the familiar box. From Jacquere to Assyrtiko, through Riesling, Pinot Gris and Chardonnay. Something for all.

Here we are in mid-April, temperatures still hovering around the zero mark and Spring still fighting to break out. Like Frog and Toad I keep turning around, left and right, expecting to find Spring just around the corner. It never seems to come. So in ode to Vinho Verde, the current plan is to seek out cool, crisp whites and to wait patiently, for without even realizing it has happened, Spring will have sprung.

The happy place effect by age in the Château Des Charmes’ vines coupled with location is usually enough to carry this Riesling through an obvious and readily identifiable tunnel but 2013 confounds. The elemental ratio, derived from multiplying reduction by altitude leans thoughts to the Vinemount Ridge or the Cave Spring Escarpment Vineyard. The compound aromatic waft, or more succinctly, the deconstructed stone, the breaking down of periodic Hollywood squares is a force to reckon. That this arrives from such close proximity to the lake is nothing short of amazing. It’s as if this Riesling is the product of stressed vines and the pierce is just so pinpointed. Less accessible than ’12 for sure, so drink up previous vintages going back at least three before even thinking about getting to know 2013. Drink 2018-2022. Tasted May 2015 and April 2016  @MBosc  @WineCountryOnt

Mineral trumps fruit is this dry take on Pinot Gris from a house on a seriously competitive roll. Good beneficial bitters join tannic sweetness on the broad palate. This is a prime example of what PG can and should be, albeit without the intensity delivered out of more demanding Alsatian vineyards. Drink 2016-2019.  Tasted April 2016  #PierreSparr @VinsAlsace  @AlsaceWines  @drinkAlsace  @ProfileWineGrp

This montane-raised 100 per cent, low alcohol (11.5 per cent) Jacquere is built on premises of tart, savoury, herbal and peppery fruit not so high in acidity. A very aromatic and flavourful Savoie that could easily confuse for Sauvignon Blanc and without transversing over to high tones territory. Good for patio imbibing and for spring vegetables of all shapes, sizes and subjected to various levels of sauté. Drink 2016-2019.  Tasted April 2016

Here in 2014 the triumvirate expression that is St. Urban, of low alcohol, captured natural acidity and necessary sugar talks the Elevation talk. This is a vintage in which expectation is met without waver, whatsoever. It’s very young and not yet exciting. The aerified territory is in teasing, not succeeding mode and the tension floats without ties to anything grounded. This ’14 will have to wait. It should be letf to waft around in the Riesling winds of Bench time until a future arrives when secondary notes will begin to appear, like acacia, honey and maple nectar. At present the stoicism is a trifle frustrating. The willingness to wait will offer just reward. Drink 2018-2026.  Tasted April 2016  @VinelandEstates  @benchwineguy 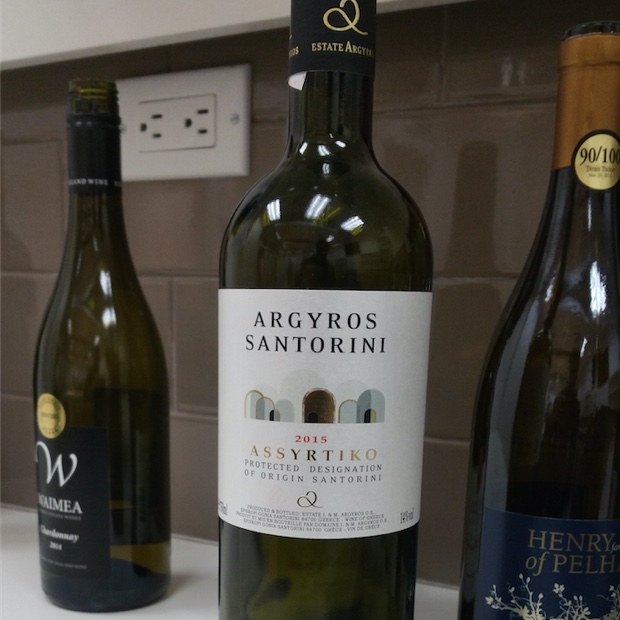 Seems to be richer, deeper and increasingly unctuous in 2015 though its extreme youth could be the source. The sheer, utter mineral macho meaning is always felt, along with the purity of its fun. What is so special about this Santorini is not just the early life mineral with the soothsaying protraction to a future filled with thyme-infused honeyed fruit drizzled over stone. No, it’s more complex than that. It’s about the true-heartedness with which it represents consciousness. This essential Argyros always offers the pleasure to bathe in its saline, sunlit waters and drink of its energy. Never failing Assyrtiko. Drink 2016-2020.  Tasted April 2016  @Santoriniwines  @DrinkGreekWine  @KolonakiGroup

It would be an impossible expectation for winemaker Virginia Willcock to do more for the Filius Chardonnay with equal or less in 2014. The 2013 is a cracker for a pittance. The 2014 holds the candle and bears the torch. A prodigal ‘son of’ fathers Premier and Heytsbury and up to the Margaret River task, Filius is the good. Fashioned in the freshest, reductive and ultra-modern way with a sous-vide savoury and animale gait. Crispy, crunchy green apple fruit is joined by a transparent, manifest barrel written in cursive and ladling out a healthy dose of duck soup. This is Australia’s great cool-climate value Chardonnay. The mineral finish is excavated agleam of gemstones. Case buy. Drink 2016-2021.  Tasted March 2016  @vassefelix  @MargaretRiverWi  @WestAustralia  @Wine_Australia  @bwwines

Quite the round and reductive Chardonnay with exceptional ripe fruit and tamed acidity. Love the tannin and the rotation. This is highly pleasurable though not meant to linger for much of an extended stay. Enjoy it now with something that swam, flakes and is marked by a slight char. Drink 2016-2019.  Tasted April 2016  #BouchardPereEtFils  @WoodmanWS  @BourgogneWines  @bourgognespress