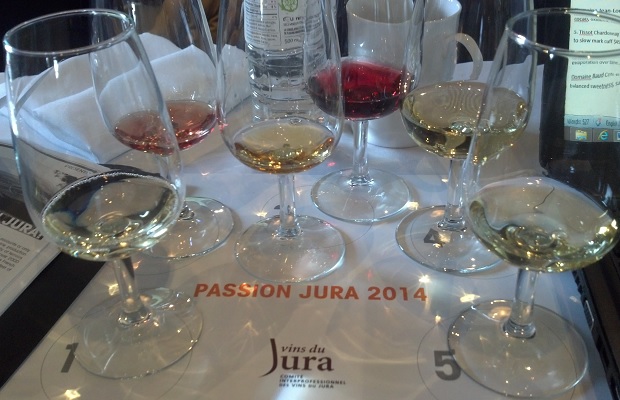 Passion Jura at The Burroughes, Toronto

The génial wines of Jura are a peculiar bunch. Nothing else in France, or the world for that matter, resembles them. They are specific, unique, idiosyncratic, and rare. Specific because virtually every producer makes the same set of wines. Unique for their varietal distinction and the élevage methods that lead them to market. Idiosyncratic due to their oxidized versus non-oxidized styles. Rare because at any given moment in time only four are available in the LCBO. There are currently 58 available at the SAQ.

For a comprehensive look at the wines of Jura, read Wink Lorch at Jura wine, food and travel

Jura is what Wink Lorch describes as a “bijou” wine region located in eastern France, east of Burgundy and within a stone’s throw over the Alps to Geneva in Switzerland. Mountains are everywhere, soils give vineyards a variegation of clay, marl, fossils and plenty of limestone. Napoleonic cold and harsh winters, serious frost issues and complex methodologies challenge vines and winemakers in ways empathetic vintners in Ontario have no problem understanding. Could Ontario be the kismet New World wine region to foster Jura, the strange and beautiful? Savagnin produced by Ontario South Coast Burning Kiln Winery is a remarkable rendition and the most interesting wine recently tasted in Norfolk County.

But I digress. Back to Jura. Bresse chickens are a most delicious and famous commodity. Saucisses morteau the pork sausage is a most righteous banger. Comté (serious) and La vache qui rit (not so much) are its most famous cheeses.

The Wines of Jura committee consisting of flying Sommelier Evan Saviolidis, Good Food Revolution, and The Tuxedo Wine Experience team brought three Tissot’s along with 14 other Jura producers in April to hit the hardwood at Toronto’s lofty Burroughes event space.

The seminar was presented by Jura expert Saviolidis with an overview of the region’s history, pertinent facts and winemaking styles. A select tasting of its wines followed, running the gamut from dry whites through to its most unusual and singular oxidized rarities.

The styles of ouille (topped up, “filled to the eye”) vs non-ouille, oxidative or not conundrum can confuse, even distort sensibilities and previous frames of reference. Some typical Jura whites (vins types) like Savagnin can make both near-oxidative, Fino Sherry-like wine and a highly oxidative vin jaune (yellow wine), most famously from Château-Chalon. The latter is aged in barrel for six years and three month with its air protective layer of yeast. It is only made in great vintages. No specific appellation is tied to its magic pixie yeast and volatile acidity.

The region is divided into four AOC, Arbois, Cote de Jura, L’Etoile, Chateau-Chalon. Jura is the only (AOP) wine region to make Macvin de Jura, a traditional blend of non-ouille Savagnin and Chardonnay. The wine is fortified with a neutral (pomace, or marc) spirit added. The vin de paille, (straw wine) is made from dried grapes then turned into wine. These are examples of the joys of Jurassic idiosyncrasy.

Crémant de Jura is produced all over the region and can use all five varieties. Arbois is the oldest and most prolific production. Cotes de Jura comes in red, white, and rosé. L’etoile whites are famed after fossils that look like stars, the wines made from Chardonnay, a blend of Chardonnay and Savagnin and Poulsard.

Hue is not necessarily a key to wine colour. The reds can look like Rosé, some oxidized whites like oranges or very light reds. Red and white grapes mix to make dessert wines. What’s on the label is the map to use as a guide to what’s inside. Saviolidis offered his insight and moderated the discussion on the following six wines poured at the seminar.

A blend of Chardonnay (dominant) with Chambourcin and Pinot Noir from the Revermont in Jura, the sweetness is perceivable (8 g/L residual) and the texture palpable (15 months on lees). Acts like autolytic champagne, with noticeable terpenic pith in a low dosage, near-Brut style.

From vines that grow in native, red, rich and heavy marl soils. Here the minimum is 35 years for those vines, the fruit in requiem of big barrels, (foudres) for 15 months. Smells like a cave and its hanging cure, but also red currants, white berries and a sweaty red onion straight from the fridge. To taste it attacks in tart, dusty pepper tones. Akin to some Loire Cabernet Franc albeit much more interesting.

From red marl and gravel soils, the yield was 4L per hectare for this vintage only. Vinified in cement vats with 15 days of maceration and 18 months of aging  in old foudres. A death-cab cute Trousseau that avoids intensity though it is marked by cracked pepper, blue fruit, cacao and reducing, wet, oxidized earth. Cherry and ash palate, long and very pure. A wonderful wine of soul meets body, “like a melody softly soaring through my atmosphere.” Trousseau is certainly indie, emo even but this example shows the talent of the winemaker.

From old vines 20 km south of Arbois, this is one of seven Chardonnays produced by Stéphane and Bénédicte Tissot. Organic and biodynamic since 2004, this argillaceous mineral-laced and calcareous-driven wholly unique Chardonnay has that atomic, soda-driven petrol usually reserved for Mosel Riesling. Climb the rock and cover it with tropically coated apple caramel and toasted nuts. An old school, baby of the barrel that will age slowly and surely for 20 years.

Of a very small appellation (4.5 hectares from an area totalling 40-45) this Vin Jaune is produced from the best parcels of land at Gaillardon (in the parish of Domblans), Beaumont (in the parish of Ménétru le Vignoble) and Sous-Roche (in the parish of Chateau-Chalon). Savagnin aged the necessary six years and three months in oak barrels with native yeasts. A non-fortified, non-ouille Jura, natural with oxidation and evaporation over time. Explicit in dried fruit and nuts and an underlying pink salinity, likening it to Sherry. Rich and both sweet/sour to taste. Like Fino, at five times the price. An eccentric wine to be sure, intended for rubber-necking and curiosity thrill seekers. Oxidized but not eclipsed by bruised fruit and dry as the desert. Is there any life in this strange and not so beautiful elixir? “There is no dark side of the moon really. Matter of fact its all dark.”

Made from a third of each variety, Poulsard, Chardonnay and Savagnin. A dessert wine pressed in January from 100 kilos, resulting in 20 litres final product. Best served with chocolate, cake, foie gras and aged cheeses, this rendition holds of balanced (30 g/L residual ) sweetness. The aromatic balance comes from salinity, raisins and candied fruit, along with brown sugar and dried apricots to taste. There is nothing overly sweet about it save for a lingering hazelnut purée. Certainly drying but without an attack on the salivary glands.

After the seminar the 17 Jura producers poured their wines to a larger audience. Here are notes on five.

Arbois Nature 2013 – Savagnin with a bounce in its step. Waxy with a citrus squeeze over just crushed grapes and approachably fruity.

Arbois Savagnin 2009 – From vines out of marnes grises du lias. At this stage it’s just developing a butterscotch and nut brown colour meets flavour sequence. The citrus here is in pith.

Crémant Du Jura Blanc Brut NV – From 100 per cent Chardonnay this is like lime cream soda without the sugar. Perfectly dry expression.

Arbois Vin de Paille 2008 – The juice is kept four months and then aged four years. On the sweet side of the style, with less  nuts and more marmalade, particularly apricot.

Arbois Vin Jaune 2006 – Down by law aged for six years and three months. As Sherry-like as it gest with added lemon, wax, piquancy and blanched nuts.

Macvin Du Jura Blanc NV – A sweety that finishes concrete dry. Like nut-crusted white flowers. Would last in the fridge for six months.

Côtes du Jura Rubis 2012 – From vines 20-30 years of age, this is a pragmatic and necessary blend of Trousseau (45 per cent), Poulsard (45) and Pinot Noir (10). Currants, red bell pepper, charcuterie and potpourri aromas. Tart and delicious.

Côtes du Jura Naturé 2012 – A year in stainless, this is modernized but not unnatural. Scents of lime and its pith and a cemented sense of concrete.

Côtes du Jura Tradition 2010 – A combination of Chardonnay (70 per cent) and Savagnin (30), each oxidized separately. Has a minty, cool piquancy and a thin to win attitude.

Côtes Du Jura Expression Du Terroir 2008 – Though this spent three years in oak it’s impossibly fresh. A wine topped up by Savagnin, the minerality is of a largesse and the wax-tang quotient crazy in length like no other white in the room.

Arbois Trousseau Singulier 2012 – The smell of fresh concrete and a coat of varnish. Very peppery and distinctive.

Arbois Chardonnay Les Graviers 2011 – A more serious and brooding rendition from limestone this has an oxidative quality.

Château-Chalon 2007 – Unique to this genre, here there is less brawn, more citrus pith and oyster shell, Most of all there are crazy acids. This version shows the greatest potential for longevity.

Arbois Savagnin 2009 – A three-year aged white that results in a dovetailing of dry, nutty and tart.

Chardonnay 2011 – Out of calcareous soil there is a soft, dreamy, mouth filling creamy character. Delicate until the angle of citrus, in pith and zest takes over. A viscous, or gras Chardonnay.

Arbois Vin Jaune 2006 – Slightly lower alcohol (14.5 per cent) makes for a brighter nose. Fresher than the other ’06’s, with lifted floral aromatics, less heavy in liqueur and more clarity.

Crémant Du Jura NV – From 100 per cent Chardonnay this is bright. fresh and lively.

One comment on “The rare and specific wines of Jura”