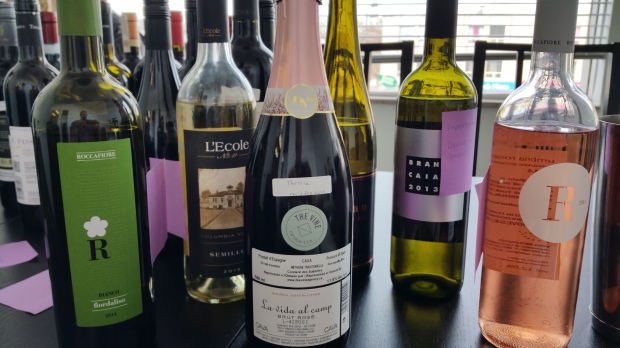 Wines of the week

Lately I’ve noticed a whole bunch of take a book, leave a book mini libraries popping up on front lawns in many Toronto neighbourhoods. The concept is right on so many levels and it occurs to me that the same could be done with wine. Open a few bottles and have a taste of each then exchange them with a friend or colleague so that each of you can sample new wines the following night without having to open anything new.

Last week the practice was put to good use and it allowed me to taste upwards of 40 wines without the benefit of a trade or media tasting. I traded wines with friends and colleagues over the course of three days and two nights. Yes, you can trust your friends to keep the provenance of a bottle so that your experience is just as fulfilling as theirs. Yesterday’s post covered the notes on 12 wines from the boot.

Related – Italian wines of the week

Here are nine more tasting notes from a wider global range, with a focus on Victoria, McLaren Vale and Langhorne Creek in Australia along with samples from the Mosel, Penedès, the Columbia Valley and the southern Rhône.

Grapes from neighbouring vineyards in the Mosel are brought to St. Urbans Hof Winery and vinified in the Nik Weis way. This stresses the Weis notion where “cool climate vines develop flavours, not simply sugars.” Though straightforward and quite traditional, the Urban is clean and shy on flint but there is a slate’s medicinal bleed and piercing acidity. Lime and more lime. Quite dry and in moderate (9.5 per cent) alcohol. This represents quintessential entry-level Qualitätswein.  Tasted March 2015  @TheVine_RobGroh  @WinesofGermany

A warm, highly perfumed entry with a hot stone streak runs forward and uphill through waves of lush berries. A wrinkle of vim is but a moment of abstruse behaviour. The macerated fruit careens in sweetness above the subtleties of savour but the spice directed oak takes over, along with a scaleable wall of tannin. This woven textile of a Shiraz needs a few years to soften. Drink 2017-2020. Tasted March 2015  @Taltarni  @TheVine_RobGroh

Langhorne Creek is the source for winemaker Ben Glaetzer’s blend, an Australian curated combination that has secured its rightful ownership within the assemblage vernacular. The star anise on the label is apropos considering the red braised pork belly and Phở tái aromatic suggestiveness. That and red plums, poached and in a sweet bun’s paste. Add to them the steam from hot rocks and warm raspberry compote. Certainly on the syrupy side of texture but the palate is equally savoury as it is sweet. Lots of character here and a finish with extension.  Tasted March 2015  @heartlandwines  @langhornecreek  @TheVine_RobGroh

A rustic must is the truth serum here, the corollary of proper old school CdR winemaking. An affinity is sensed to both an Albert Mann Pinot Noir and a Baden Spätburgunder with porcine aromatics and an antediluvian aridity. Very cherry, dusty and plainspoken like a trending linear regression. Such a welcome step up from so many over the top sunshine dramatized Rhônes of excessive residual and alcohol. Though this clocks in at 14 per cent you would never know to read it on the spirit hydrometer. Direct energy and pulse would make this a very keg worthy red.  Tasted March 2015  @VINSRHONE  @RhoneWine  @HospiceduRhone  @TheLivingVine

A regional vigneron’s blend from two vineyards, BG and V: The Baker’s Gully (old Lloyd Light Vineyards) at the base of the Southern Mt. Lofty Ranges and Oliver’s Road (the continuation of Field Street) near to the Vale Township. Really elegant and refined in spite of a big, bold and juicy character. Ripe, sunny and warmer categorical climate expression. Quite tightly wound with a metallic iron post or fist in your face, layered and initializing the baking effect. Needs three or four years to fully integrate at which time the pie will be ready.  Tasted March 2015  @mclaren_vale

Sauvignon Blanc (13 per cent) adds buoyancy to the main attraction in this vanguard and reputable Columbia Valley pioneer. Quite toasty and marked by early nose-hair splitting and splintering barrel notes. Dare say reductive but not in a rubber sap run way. More like Sémillon-dominated Bordeaux, of big bones, cut through soluble rock, created a sinkhole that swallows up flavours, only to release them in geyser like fashion in later years. So with patience and age-time in mind, this Sem will have better years ahead, when the heavy (14.5 per cent) alcohol integrates and the lemon drop-butterscotch flavours mellow. Generous pH (3.2) and high Brix (24.2) were the product of a very warm vintage. Rounded by concentric circles of acidity and bitter pith tannin, this is very tropical, like Gewürztraminer, but more in mango than lychee. Needs five years minimum because the oak is overdone. Tasted March 2015  @lecole41  @WINESofWA

Blush Cava blend of Macabeu, Xarel-Lo and Trepat. Aromas scale the neck of the bottle with immediate desperation even before the cork has fully disengaged. The wine just looks savoury with its bronzing salmon patina. Possessive of an ultra-fine mousse, aridity in immediate initialization and very much the sum total of base elements. Sweeter than expected to taste, seemingly oxymoronic to the nose and in conjunction with a low to moderate 11.5 per cent alcohol. The overall package is one of those beautifully impossible pH/rS/aBV agglomerations. Flavours lean to strawberry and ginger. The Trepat gives it a Costers del Segre angle of anxiety. This has moments of Pinot Noir-esque kinship with some finer Crémant d’Alsace Rosé (like Louis Sipp) in such a refined way.   Tasted March 2015  @lavidaalcamp  @TheVine_RobGroh

Bottled in 2012, this Taltarni is showing some age, in a positive way, in dried fruit and Cassis less sweet. Baking fruit and warm spice are grounded by earth and a chalky, citrus, lactic underlay. Has fully integrated components that some time ago included a grit of acidity and tannin, at this juncture no longer in control, but fully primed for peak time. In fact this Victorian has reached the secondary stage of its life. The raisining of fruit means drink it now and for another year.  Tasted March 2015  @Taltarni  @TheVine_RobGroh

Only 900 cases were made of this blend of Upper Goulurn (80 per cent) and Yarra Valley (20) fruit. Indigenous yeasts were used and 80 per cent was fermented as whole bunches then aged in new and older 500L puncheons. So very fresh, the Harem (Harum…) was bottled with out fining or filtering eight months after picking. “Amidst a sea of wheat,” in a world of jammy Shiraz, say hello to this 13.2 per cent alcohol Victorian Syrah. This is fully exposed and in exposition of its naked beauty. Were more of Victoria produced in this progressive rock, singer/songwriter style, the throngs would applaud. Pure, smokey, opaque and sultry, not exceedingly complex but built on whole bunch bravery. Lyrical, harmonious and eminently listenable. Quite rightly so, shines on brightly, a good album side.  Tasted March 2015