Consider the winemaker’s style not merely embraced but created by J.L. Groux of Stratus Vineyards. Most wine folks know him as a mad scientist, a mathematician, as Niagara’s ‘Master of Assemblage.’ Groux is a precise counting man, proud to share the barrel fermentation periods of each and every wine in his stable. He reminds me of the Sesame Street guy, the one who shows up in elevators and emerges from swimming pools carrying painted number signs.

The Stratus portfolio resides in a conspicuous niche, sometimes criticized for over diversifying and noted to employ the most opulent Niagara fruit but who can refute the underlying and unequivocally consistent thematic running through this solo tour. 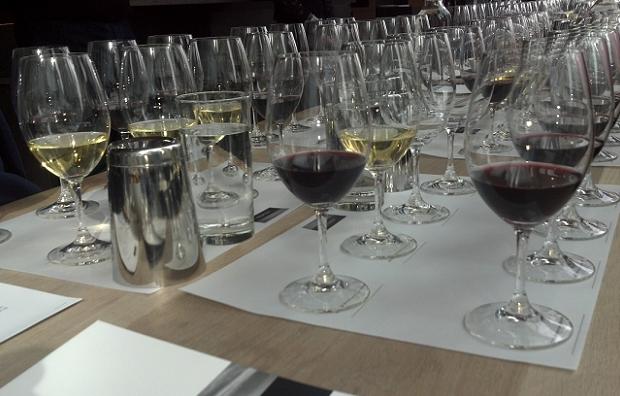 David Chang’s New York Momofuku empire is embraced by those who appreciate the Luxe, calme et volupté. The detractors complain and express loathing at a lack of somewhereness and that same bitter pill is sometimes offered up to Mr. Groux. This single varietal tasting shatters the naysayer’s venom as each wine calmly expresses its terroir. Chef Blondin is not unlike J.L. Groux, or Baudelaire. Chef’s plates are clusters of colour, texture and imagery offering an “escape to an imaginary, tranquil refuge.” Groux’s Stratus White and Red iconic blends enter such territory but these grape a capelle are the windows into the winemaker’s forays. The media lunch was a treat of the highest order, also thanks in part to Charles Baker and Suzanne Janke of Stratus, along with Beverage Director Jonathan Gosenhauser and the Momofuku Daishō team.

Gamay 2010 ($29) from very low yields (2 tonnes/acre) is possessed of a soft mouth feel corrected by tart currants and is a deep, smokey and confounding example of itself. Pushing 15% abv with a concentration of sugars and mature phenolics. Vanilla, black licorice and though not like Pinot at all, you can tell it was treated that way. Naturally, through green harvesting, picked shriveled and “with patience.”  90-91

Syrah 2010 ($48) is picked early as compared to other well-known varieties like the Cabernets and this vintage saw a 25% yield decrease/concentration increase. Pretty, focused and indicative of candied flowers in replay with a note of citrus blossom. A Syrah that clearly speaks of Groux’s infatuation with aromatics. “What I do know, my Syrah is improving overall.”  89-90

Merlot 2010 ($32) was picked early enough (October 25th) so as to avoid a sun-burn and overcooked aromatics. Always a great contributor to assemblage in Ontario, this Merlot from clonal plantings in ’85, ’01 and some unknown old block of (clonal) fruit was picked at a restrained (24.7 brix) number on the sugar scale. Dusty and blessed with juicy, mulberry fruit, this to me is the epitome of the winemaker’s SV style. Delicious Merlot. Damn!  91-92

Malbec 2010 ($48) is imbued with the brightest hue and aromatic tenderness. Wild yielding from vines planted in 2001, a hard-cropped life is the grape’s necessity. From my earlier note: “Made with the help of consulting oenologist Paul Hobbs in an “Alta Vista,” high-altitude style. Cool-climate rendition, a window to the future for the grape in Ontario. Hits a blue note, kind of like Philly soul. Unheard of 10 years ago, this one’s saying “just trust in me like I trust in you.”  90-91

Petit Verdot 2010 ($38) seems the most muted thus far though it has the most acidity and tannin. The two seem to struggle with one another though the warmth of 2010 helps, as Groux notes “I’m not convinced they are not friends.” He also states “I think Petit Verdot makes better wine in Niagara than in Bordeaux.” From my earlier note: “with its bounce is the Happy Jack of the flight. Thick in weight and texture, a steak sandwich in a glass. Remarkable effort for stand alone Petit Verdot in Niagara-on-the-Lake. Has a certain Spanish modernity and is certainly neither “petite” nor “little.” Say what you want about this PV but never “prevent Jack from feeling happy.”  89-90

Chardonnay 2010 ($55) from natural yeast, full batch (bunch) pressing and heeded by Paul’s call to full malolactic fermentation, this fruit was picked on November 15th, a day “you had to go run and pick fast.” Groux is not trying to make California or Burgundy but make the best in Niagara. Clarity and sun drenched hue, tropical fruit dominance, sweetness, malo-butterscotch obviousness. Some tart orchard fruit late but certainly warm vintage wine. Not the most arid Chardonnay but blessed with great length. 90-91

Sauvignon Blanc 2010 ($29) is barrel aged (like the Chardonnay) on the lees to offer roundness, not residual sugar. It’s sweetness is related to sugar, but it’s not the real thing. So much cool gooseberry and passion but lacking acidity and there is very little asparagus stink. Perhaps a green pea or two. Groux seeks boxwood and hemlock and there are hints here. “I don’t care for any tropical style,” he says. This one clearly leans more Sancerre than anything else.  89-90

Sémillon 2010 ($32) is very fresh though muted in tone, verve and gumption. But this is Sémillon and I would not expect any sort of true personality indicator for at least three years. Elegant, with a hint of grapefruit and bigger palate developing in the glass. Awaiting the wax, sandalwood, lemon and honey.  88-89

Gewürztraminer 2011 ($29.95, 251447) has already improved since tasting it six weeks ago. “I’ve been working 20 years to make Gewürz,” says Groux. Micro oxidation protects the aromatics though they are low-toned, in rose and lychee. Uni-dimensional, not 100% dry, made with a homeopathic approach in mind, always with an eye on the assemblage white.  87-88

Stratus Cabernet Franc 2009 ($38) shows a bit of green but not of the inhibiting kind. From fruit picked on December 8th (what???) in Niagara-on-the-Lake, a type of gamble that can go very wrong, but Groux is a winemaker who knows his climate. Young at heart, full of smokey, tangy, currant baking aromas. Maternal but blessed with firm, plush tannin. “Some people like cupcakes,” I prefer a muffin man.  “Always a pleasure to grow (Cabernet Franc), if you are patient.  89-90

Mosaic 2010 ($25) is a balanced dessert wine giving equal credit despite the 70-30 Riesling-Gewürztraminer split. All natural sweetness, allowing a focus on the acidity. Only one ever made. Will they make it again? “Perhaps.”  89-90