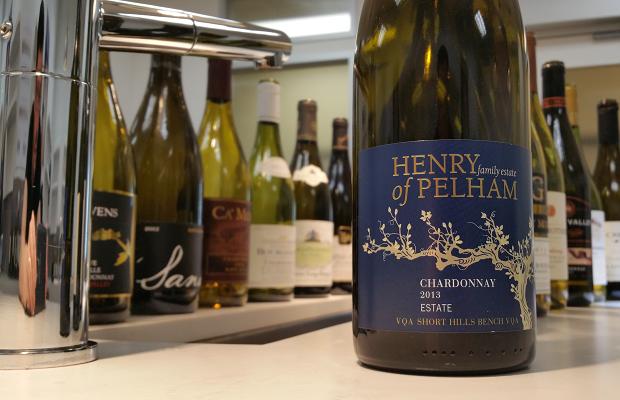 Henry of Pelham Estate 2013 amid a sea of April 4th, 2015 VINTAGES Chardonnay

You can find them from coast to coast. This coming Saturday six VINTAGES Canadian releases, four from Ontario and two from British Columbia, are wines that speak on behalf of exceptional vineyards, out of important places. These are bottles made by winemakers entrenched in their territory and from grape varieties purposed to grow there.

The Creekside Estates white blend known as Laura’s White has become a poster child for varietal blends on the Niagara Peninsula. Winemaker Rob Power has found a way to make a consistent expression in every vintage.

Angela Kasimos was the winemaker at Riverview Cellars and is now leading the charge at Small Talk Vineyards. The Small Talk Syrah is yet another example to speak on behalf of pushing for more plantings, especially down by the Niagara Lakeshore. But that’s not all. Kasimos is also making Cider at Small Talk. It’s called Shiny Apple Cider, made from Grey County apples and Niagara grapes. You heard me. The White Cider is augmented by 10 per cent Riesling, the Rosé with 15 per cent Pinot Noir. You should try it on tap at Barque Smokehouse.

Related – The pearls of Morissette’s wisdom

The Cuvée Black Ball Riesling by François Morissette failed on several occasions to pass through the VQA panel’s strict discretion. The atypical one has finally broken down the barrier and it’s now your turn to decide if it pleases or causes consternation.  My chance to opine is laid clear in the review below.

From B.C., Gehringer Brothers out of Oliver offers a unique, Golden Mile take on Pinot Gris. More than just coincidence to be here today as yesterday marked a new direction for British Columbia‘s wine industry. The #GoldenMileBench just became the province’s first sub-appellation.

Related – A biography of Ontario and B.C. wines

Sandra Oldfield of Tinhorn Creek called the day momentous. She wrote this on her blog. “Something as elemental as the brown given to vineyard stones by a passing universe.  In casual simplicity, I toast to you, the Golden Mile Bench, British Columbia’s first sub appellation.”

The five recognized wine regions in British Columbia are The Okanagan Valley, Similkameen Valley, Fraser Valley, Vancouver Island and the Gulf Islands. The new designation was announced by the provincial government on March 30 and will legally identify where grapes are grown. In this case, the escarpment southwest of Oliver which runs south from Fairview Road and near Highway 97.

Related – A day in WineAlign life: 15 new releases from Ontario and B.C.

In Jauary I wrote about Burrowing Owl Winery. I talked about the extreme nature of their location and what is does for their wines. “That the winery is situated on the most northern outpost of the Sonoran desert, an arid and agriculturally inhospitable stretch of terroir that originates in Mexico, is not exactly so well-known. That the Owl can produce such wines of extraction spinning on a compass of intensity is one of the wonders of the Okanagan Valley.”

The 2011 Syrah reviewed below drives the stake even deeper into the searing heart of the Owl.

Sara d’Amato and I have compiled a list of recommended Canadian wines in the second of two WineAlign April 4th VINTAGES release reports.

Off the Beaten Path, from East to West and a Battle of the Corkscrews

Here are notes on six new local releases coming to stores this Saturday.

When I tasted the 2012 Laura’s White again with winemaker Rob Power two weeks ago my last note said “this has the grab, tempered by the warmth of the vintage, so look for ’13 to nail it with a hook.” That it does, along with the most balm and herbs of the last five vintages. This blues traveller goes deeper into complexion and white varietal compilation. The fruit is very tropical in 2013, softer, easier, lighter in complexity, but it has that musical trigger, the jingle, the popper, the hook. If ’12 was the revivalist blend, then ’13 will try to be the proselytizer. “Because the hook brings you back, ain’t tellin’ you no lie. The hook brings you back, on that you can rely.” Everyone can drink this. While it may not stand up a decade or longer later, you will be able to look back on it fondly and remember it was a wine for the times. Drink 2015-2020.  Tasted March 2015  @CreeksideWine

A concrete set of aridity rules are the modus operandi here in a reserved, stoic and aerified sort of Okanagan Pinot Gris. Paler and thus less oxidative then the last vintage to pass through these parts. Very much cut into pear, less so of white peach. The grape tannin is noticeable, even obdurate. Generous alcohol contributes to the mulish attitude though with the aridity and slight citrus push you’d be hard-pressed to really notice the call.  Tasted March 2015  @GB_Wines  @UncorktheSun

Sunlight is the key to this ripe Chardonnay, snatched from vines that grow on the most easterly of the Niagara Escarpment’s sub-appellation. Here Henry of Pelham calmly puts its hegemony over Short Hills Bench Chardonnay on display. The fruit layering is very impressive, compressed even, with just a spiced spirit injection from the barrel. The Estate Chardonnay is in a mid-range class of its own, this gatherer of heat days, hoarder in spring water retention, cleanser in sand and gravel drainage. The vintage just seems perfect for this niche bottling, balanced, primed to finespun texture, stretched for length and good to age at least five years.  Last tasted March 2015  @HenryofPelham  @SpeckBros

In the hands of new winemaker Angela Kasimos, Small Talk Vineyards should consider going with and increasing their plantings of Syrah. It’s clear that Kasimos has inherited good solid fruit and the Small Talk (formerly Stonechurch Wines) treatment in ’12 is a very good start towards what should become a great varietal relationship. Smokey, savoury and full of positive brine vibrations, this has body but no overripe or caramelizing denouement. Nor is it green, though it exhibits tonalities that whisper volatility and chews that say sinew. Yet it persists healthy and clean. This is Syrah of lovely curves, rounded shapes, bright peaks and gently sloping valleys. Who doesn’t like Syrah young and infectious like this?  Tasted March 2015  @SmallTalkWines  @AngelaKasimos

Let’s get something immediately out of the way. The wines of François Morissette are not meant to please curmudgeons, skeptics, contrarians or members of the wine media. This Riesling has no desire to kiss ass. This will not appeal to late harvest lovers, from Kabinett to Auslese. Is it ripe? Not quite. Is it different? Absolutely. This compares to almost nothing. Like a Champagne ginger, lime and bronze filings cocktail, the Blackball ’13 is so very developed and despite the colour, is a hyperbole in primary existentialism. That it has essentially no residual sugar and an achieved 11.5 per cent alcohol is a complication only the clinical doyenne has the answers to. Riesling in between dreams, “never knowing shocking but we’re nothing.” The Blackball has struck, is not yet stricken and will offer remore pleasure for another six months. Then it will deconstruct, dissolve and devolve into darkness and funk. Five years later it may emerge like a phoenix, jack up like a Rangen Riesling, into the ethereal. Will it happen. I couldn’t possibly tell you. We may never know. But I can say that then, and only then, will it truly tell its story. Drink 2020-2025.  Tasted March 2015  @PearlMorissette

Just when it seems that Burrowing Owl could not coax beyond the perceived maximum in ripeness and richesse out of desert sage country Syrah, the envelope pushes higher in this ripping 2011. An absolute circum whirl of dark fruit, crushed peppercorns, Cassis and candied violets draw syrupy into bottle. Big, brawny and modern, styled like Syrah from peak perches overlooking the French Riviera with a small percentage of mitigating northern Rhône sensibility. Texture is pure silk. Acids are tame but very present.  Tasted March 2015  @BurrowingOwlBC  @winebcdotcom  @LeSommelierWine