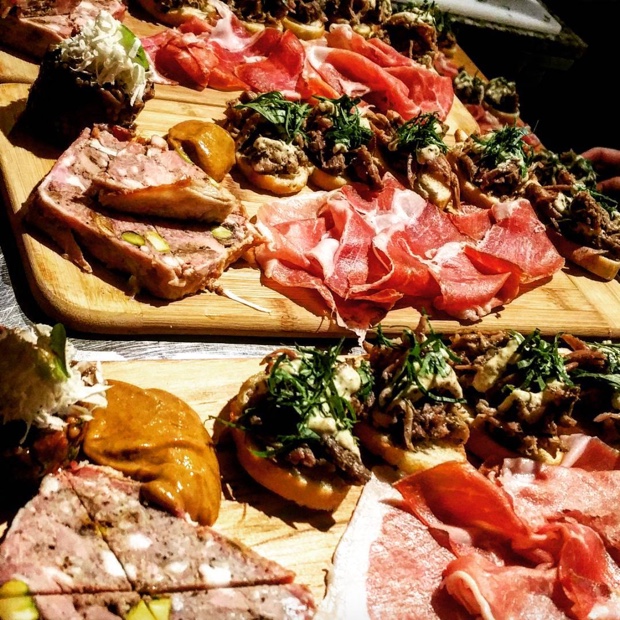 Charcuterie and Appetizers @barquebutchers by the @greek_silver_fox, Chef Jo Castrinos

It’s December, baby. In Ontario that means one thing. Cash money for the LCBO. Lineups longer than a 1988 Moscow bread line. If you’re from somewhere other than this magical, monopolized place we call wine central you just wouldn’t understand. You would not be privy to and giddy with isles stacked in pyramids of critter red and whites, Bailey’s Irish Cream and Absolut Durian. Wait, that would be cool.

No, not la vida loca. We are not talking about living the crazy life to make you cool. No party trick, no Spanglish, no politically incorrect, Urban Dictionary Ricky Martin slur. Not this either. “The awkward silence and/or major anticlimax that follows the confession of a big secret that everybody else already knew.”

You want it all in December, the most wine for the money, for gifts, to bring to the holiday party, to stack some away in the cellar. You want the Garden of Eden in a bottle.

In a gadda da vida, honey.

Let me tell ya.

With the ghosts of Christmas gem releases now just a strange, uncomfortable and debilitating nightmare trailing away in the rear-view mirror of Visa cards maxed out past, now is the time to focus on what’s real. To concentrate on purchasing wines in your price bracket, wines that speak of people, places and who will be drinking them.

I have combed, tasted and considered the releases now on shelves for this weekend’s December 12th offering. The parameters are $15 to $35, something for everyone, to purchase with confidence and to equip you with a most necessary advantage, to present them with pride no matter the circumstance. Ten wines to work the holiday room.

Such a juicy red, of honest imporosity and primed with acidity to prop and speculate. Bang on for the price, in its weight class and with the charm of sweet adolescence. Solid Dao with a whole lot of propensity to mix and match with the multitude of foods at your table. Drink 2015-2019.  Tasted November 2015  @wines_portugal  @winesportugalCA  @Noble_Estates

Syrah, Mourvedre and Grenache blend from the Pic Saint-Loup mountain peak and limestone cliff flanks of the the Coteaux du Languedoc. Sharp with concentrated red fruit, tight acidity and just enough tannin to render this marketable to a five-year plan of evolution. Real and as naturally forged as they come from Gérard Bertrand’s Cross Series reds of southern France. Prime example from and one to celebrate a terroir like Pic St Loup which continues to play the unheralded outlier. Really fine and just the right and correct amount of attitude. Drink 2015-2020.  Tasted November 2015  @GBvins  @FwmWine  @LanguedocWines

Only a year and in conjunction with an improved Sparkling wine vintage for Riesling, short work has elevated the young Spark’s game. A repeat lees performance initiates the conversation, of cheese melted overtop composite laminate, with yeast burgeoning about. In 2013 the concrete crispness is cemented deeper, etched into stone and thus completing the sub-$20 legacy. That winemaker Paul Pender can coax Riesling character, striking Sparkling wine resolve and yet hover in the air of litheness, well, this is the kneading. Silty, salty earth and soft transitions to citrus acidity are a requiem for success as per the Twenty Mile Bench/Limestone ridges vouchsafe common. Can even imagine a bit of time turning this into sparks and honey. Drink 2015-2019.  Last tasted November 2015  @Tawse_Winery  @Paul_Pender

A massive amount of fruit, caked earth and big, bouncy reduction is packed into this free swinging Western Cape red blend. The reduction mixes with Rhone bacon and its own regional gamey notes. This is both typical and radical. It is made in a style that many love and will continue to love and yet others will balk at its generational specificity. The clean, pure focus in Rhone varietal terminology teams up to subdue the Cabernet though that variety does add lushness to smooth out some of the hard edges. Tons of flavour. Drink 2015-2020.  Tasted November 2015  @ErnieElsWinery  @WOSACanada  @WOSA_ZA

Another terrific vintage for the varietal Ley, wrapping a wreath of pure Graciano fruit around your neck and letting you lay back with a sip of something beautiful. Pure floral liqueur, the violets and the sweat, the sweet fruit and the citrus accent. Soft lactic acid and chewy with an accent of dark chocolate and spice. A bit more burly than the ’09 and certainly increasingly oak apparent but a good mouthful nevertheless. Let it rest for two years to let the wood sink in. Drink 2017-2022.  Tasted November 2015  @BaronDeLeyRioja  @RiojaWine  @AMH_hobbsandco

Where has this been? This harmonious composition, like a Starland Vocal Band, Cabernet Sauvignon (30 per cent) plus Cabernet Franc (30) friendship with a healthy dose of Merlot (27) and a bit of Petit Verdot (4) in minor support. The acidity and the tannin have nearly fully waned but it’s a real pleasure to drink at this seven-year mark. Pretty fruit, creamy texture, just enough energy left to keep the party grooving, weightless and soaring in the air. Some chocolate and dessert like tendency but with the right kind of salty main course or just a few sips leading to that point, this will be an afternoon delight. “My motto’s always been ‘when it’s right, it’s right.’ Why wait until the middle of a cold dark night?” Herbal finish is cool and Northern Ontario like in its slow, easy exhalation. Extra points for the foresight, the opportunistic release point and the effort in a hit or miss vintage. The Evergreen Brickworks market’s loss is the LCBO’s gain. Drink 2015-2018.  Tasted November 2015  @StratusWines

The rocks beneath the earth precede the rich, dark fruit. After the berries and the candy beets and the spices subside the flowers grow and take over the room. The vintage brings more layers than before. Malbec of character and belief, even a touch of good VA, a coat that only the Southern Hemisphere can provide. It is not usually present in Mendozan Malbec so it’s really a breath of fresh paint here in the Versado. Great purity. Protracted length. Most expansive and intriguing vintage to date. The Reserva will be killer.  Last tasted November 2015

A rich, nearly creamy mouthful of Xinomavro, full on red fruit and as much scorched earth as prescribed to be necessary. There is plenty of front end acidity and back-end tannin though the pathway between is rocky, jagged and bumpy. I’d like to see this again in two or three years to see if it has smoothed out. For now it’s certainly edgy and divided though I will admit it has gained my full, undivided attention. Time will tell. Drink 2017-2022.  Tasted November 2015  @KolonakiGroup  @winesofnaoussa  @DrinkGreekWine

May just be the most well-rounded Premier Cru Chablis in the Ontario market today and orbits would not be its prescribed or described path. Linear more like it, star-shooting with trailing sparks from its steely beginnings out of stainless silo. Well-rounded because it draws fruit from every level of Kimmeridgien subsoil up and down the hills, from the bottom of the valley to the top of the slopes. Also because of its pinpoint unoaked Chablis accuracy, from mineral on the tongue to citrus receding and recoiling. So very clean old bones fruit (up to 35 years old) and direct at a price point most Premier Cru fail to touch. Drink 2015-2021.  Tasted December 2015  @BIVBChablis  @oenophilia1

Classic and I mean classic Chianti Classico, cured, ancient, fruit forward. Modern, gritty, tannic, spicy, desperately in love and bound by leather. Tea and liqueur, all in Chianti Classico. Some iron and animale, bitters, tonics, cherries, medicines, all of the above. Acidity raging, thunder clapping, lightning striking. Needs seven years to shed emotional tears, fully settle and be a memory of its intense self. A wine that will remember. Drink 2018-2026.  Tasted November 2015  @chianticlassico   @rogcowines